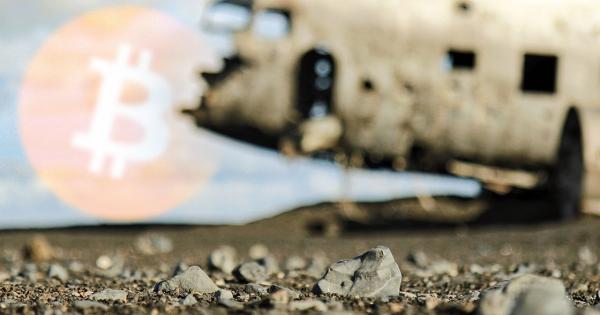 As Bitcoin continues correcting and now is trading below the $10,000 support level, Brandt reaffirmed that the cryptocurrency market could be about to suffer a major plunge from the high of $310 billion in market capitalization to roughly $150 billion, which will mostly affect altcoins.

While the parabola in BTC was subject to different renderings, the parabola in the total market cap chart was loud and clear. Total cap should correct 80%. Most of the damage of decline will occur to altcoins. pic.twitter.com/DssCIL4H0R

An 80 percent correction from Bitcoin’s latest parabolic advance from $3,130 to $13,800 could imply that this cryptocurrency will depreciate to nearly $5,000, which is somewhat more optimistic than Tone Vays’ idea of a move down to $2,800. Although it is too early to tell whether any of these bearish scenarios will be possible or not, this technical analysis will evaluate the different levels of support that could hold BTC from a further drop.

According to Josh Rager, a technical analyst, an 80 percent correction will be devastating to most crypto assets, but the $8,000 support level could be able to contain the price of Bitcoin from such as severe decline.

Would not be an 80% correction from 0 to top

This will certainly be a blow to most assets and BTC has strong support in the block shown below near $8000 pic.twitter.com/YwOaMAHQh8

Adding to the bearishness, Bitcoin seems to be moving outside of the ascending parallel channel that has been developing since mid-December 2018. Due to the longevity of this channel, a candlestick close and an open below it could accelerate the selling pressure behind BTC significantly dropping its price down to at least the 50 and 61.8 percent Fibonacci retracement zone previously described.

Nonetheless, as the technical analyst Bob Loukas stated, there is still a chance that instead of retracing abruptly Bitcoin will go through a consolidation phase in the next 4 months that could eventually take it to around $8,000 and this level of support could act as a rebound point to take this cryptocurrency up to new highs.

#bitcoin's intermediate term trend is almost certainly over now. A corrective phase appears to be well under-way, selling heavy, but at some point re-accumulation to hold the line. I would not be surprised to see a 4 month (2-Cycle) consolidation from here. pic.twitter.com/3k9XIuJLrc

To Luke Martin, this corrective phase could indeed be a trading range between $13,000 and $9,700 where Bitcoin could spend the near future trading before a break above or below these levels that could pinpoint where it is heading next.

For most investors the most important info that a $BTC chart conveys is structure:

Bitcoin was ranging until Apr 1st. The uptrend lasted ~3 months. Price has been ranging for ~2 weeks.

Below 9700 or above 13k could break price out of current range. pic.twitter.com/KEWCEHMboZ

Under this idea, the 12-hour chart shows a parallel channel that started in mid-June, which could contain the price of Bitcoin before a clear break occurs. So, if the current 12-hour candlestick is able to close above the 100-twelve-hour moving average a lot of credibility could be added to this scenario and a rebound to $11,100 or the 50-twelve-hour moving average could be expected.

It is worth noting that a move down to $8,000 will only represent a 40 percent retracement from the high of $13,800, which is normal during a Bitcoin’s bull market and helps maintain bull trend healthy.

Since that time BTC began reaching higher highs every couple of months. On May 25, the cryptocurrency went up to $2,746 and immediately pulled back 31.38 percent. The high of June 12 when one BTC was worth $2,985 was followed by a 39.20 percent correction. A similar pattern happened after the high of Sept. 1 and Nov. 6 that saw Bitcoin drop 40.12 and 30.09 percent, respectively.

The overall sentiment in the market is bearish due to the number of sell signals that have been triggered under different time frames, such as the bearish MACD crossover on the 3-day chart and the break of the ascending parallel channel on the 1-day chart.

Despite Peter Brandt’s bold prediction of an 80 percent correction that could take Bitcoin sub $3,000 levels, it seems that at the moment this cryptocurrency could likely retrace to around $8,000, which will represent a 40 percent pullback that based on historic data will help keep the bullish trend healthy.

There is a small probability that Bitcoin could actually go through a consolidation phase between $13,000 and $9,700, but it will all depend on its strength to get back above the 100-twelve-hour moving average before the current 12-hour candlestick closes.

Are Cardano, Chainlink and Ravencoin doomed to continue falling?