Price drops are being witnessed amongst all major cryptocurrencies as of late as market volatility continues to make its presence known. 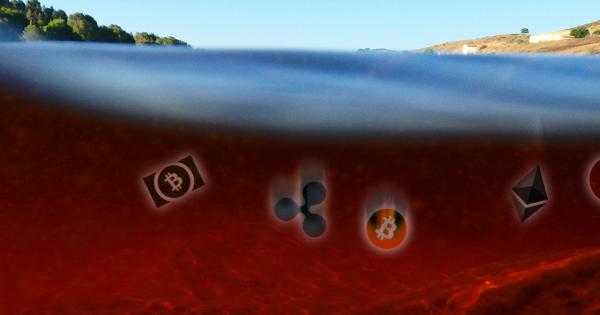 Photo by Antonio Arcos on Unsplash

Price drops are being witnessed amongst all major cryptocurrencies as of late as market volatility continues to make its presence known. Assets like Bitcoin, Ethereum and Bitcoin Cash are all seriously in the red, having dropped anywhere from a few hundred dollars to over $1,000 since experiencing monthly highs last week.

The price of Bitcoin has fallen dramatically over the last 24 hours. At press time, the currency is wallowing at $8,477 – roughly $600 less than where it stood yesterday afternoon. Prior to that, the currency had experienced a weekend high of $9,800 but subsequently dropped to $9,500 and $9,300 respectively within a 48-hour period. This ultimately marks a $1,200 drop in only five days.

There are several alleged reasons for the price drop. One comes by way of South Korea, a growing blockchain and cryptocurrency hub that currently accounts for roughly one-quarter of the world’s digital asset trades.

One of the country’s largest and most popular cryptocurrency exchanges, Upbit, has been raided by government authorities, thus renewing the notion that South Korea is heightening regulatory scrutiny in the crypto space. Upbit is suspected of illicitly moving customer funds to the accounts of its executives.

In addition, a Mt. Gox trustee is suspected of having moved several Bitcoin funds into four separate wallets, which may have triggered a subsequent sell-off and contributed to the price fall. Several trustees of the now infamous Japanese exchange have continued to move large sums of Bitcoin despite acknowledgments that such actions may contribute to wide price swings in what is already a widely unstable market.

Still, many analysts – including financial strategist Robert Sluymer – feel that Bitcoin will undoubtedly go higher from here. Sluymer blames the current price drop on newfound regulatory attempts but feels that these will soon thin out, allowing bitcoin to recover by summer.

Ethereum has dropped nearly $100 from its previous mark of $752 mentioned during our last price piece. ETH is now trading for about $680.

However, respect and awareness for the coin could grow in the upcoming weeks as crypto-trading firm Crypto Facilities in the United Kingdom announced today that it will begin trading Ethereum futures in the tradition of Bitcoin futures and XRP futures, which were introduced in 2015 and 2016 respectively.

Founder and CEO of Crypto Facilities Timo Schlaefer believes the introduction of ETH futures is proof that the technology behind Ether coin is rapidly maturing.

Ripple has fallen big time from its previous $0.80 position to $0.69 at press time. Analyst Tomas Salles of FXStreet suggests that the coin’s support level could drop as low as $0.55 as XRP incurs its latest sell-off.

Despite this, Ripple’s partnerships continue to grow.

Recently, the completed a successful pilot of its xRapid platform and performed interbank transfers between the United States and Mexico.

The results suggest that XRP lowers transaction fees by as much as 40 to 70 percent, and that said transactions typically only require between three and five seconds.

The price drops incurred by both BCH and Ethereum in recent days has lit a fire in the ongoing “war” between traders. Many ETH enthusiasts say that Ether is a pure form of cryptocurrency technology, and free from interference and tampered preserves, while Bitcoin Cash supporters believe BCH is more reliable, boasts faster forks, and is a stronger representation of what Satoshi Nakamoto had in mind for the cryptocurrency.

Litecoin has crashed to about $140. This marks a massive fall from $157 since our previous price discussion and a 10.5 percent drop over the last 24 hours.

Analyst Manoj B. Rawal of FXStreet suggests that immediate bear patterns in Litecoin’s behavior will build massive resistance at both $149 and $155.

The prices of major cryptocurrencies continue to fall, and the global market cap has lost $50 billion over the last day, currently sitting at $388 billion. With all major cryptocurrencies in the red, investors are advised to perform their due diligence and consider the volatility and instability of the digital assets market before getting involved.