News about a police raid of Tron’s offices in Beijing has gone viral on Twitter, with many people assuming the company was investigated for scams. 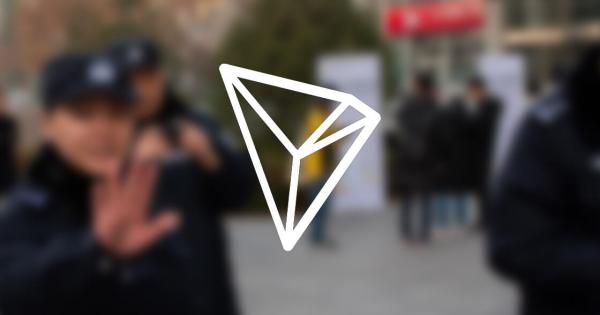 News about a police raid of Tron’s offices in Beijing has gone viral on Twitter, with many people assuming the company was investigated for scams. However, the situation was vastly exaggerated as the police were called in to protect staff and ease tensions as several protestors gathered in front of the company’s building.

Tron, one of the largest crypto companies that have come out of China, has had its fair share of controversies lately, but few could top the misinformation and panic that started earlier today. A Twitter user by the name of Hayden Otto shared a video recorded in Tron’s Beijing offices.

Police raids at #Tron offices in Beijing? Additionally, there's many angry people gathered there who are saying things like "Tron is a scam". $trx #trx @justinsuntron pic.twitter.com/qFykQErQu6

The video showed nine or ten men in uniform guarding the doors of the office, while the person who recorded sounded shaky and upset speaking in Chinese. The user that shared the video said that these could be police raids and that there were “many angry people” gathered at Tron’s offices saying things like “Tron is a scam.”

Other users were quick to comment on the tweet, making the video go viral in just a couple of hours. Many were saying this was a clear sign that the company was up to no good, as word about a transfer of more than $23 million worth of TRX got transferred between two unknown wallets.

Some even said this was the perfect time to open up short positions on both BTT and TRX, as both coins would inevitably see huge price drops due to this controversy.

Authorities there to protect, not raid

However, it turned out that the situation was vastly exaggerated on social media. As more videos of the event started to appear on social media, especially Chinese social messaging app WeChat, it became clear that the police were called in to protect the staff against several protestors who tried to enter the offices.

A lot of misinformation floating around, so to clarify. The Tron office wasn't raided by the cops. Tron was the one who called the police to protect them from investors who are upset that Tron scammed them. https://t.co/9B03N7Pv7k

The people that tried to enter Tron’s offices claimed that the company was responsible for the loss of over 200 million yuan and that it should face consequences.

It was basically a #Tron wallet promising guaranteed return with $trx deposits. Like #plustoken. pic.twitter.com/FkIZ4W2hbB

Their protests weren’t without merit, though—many people fell victim to a fraudulent platform claiming to be Tron. A scam website called the “Wave Field Super Community,” a play on Tron’s Chinese name “Wave Field,” was set up in order to tempt users to invest in the platform. The fraudulent company claimed to be one of the 27 nodes that were given “special status” on Tron’s platform.

As Justin Sun, the founder and CEO of Tron, never denounced the fraudulent company, many investors assumed the two were connected and kept pouring money into it. According to Nuclear Finance, the scam is thought to have cost its victims around $30 million. One of the victims of the scams reportedly committed suicide.

Sun issued a vague warning about companies pretending to be Tron on Jul. 1, the same day the “Wave Field Super Community” website was shut down.

As a leading blockchain protocol, there are Ponzi schemes using #TRON, #BitTorrent or #uTorrent names like “MMM #bitcoin, #Ethereum pyramid & #EOS ecosystem schemes”. We will never ask you to send money. Be careful & hodl your $TRX/ $BTT

Investors were left outraged at Sun’s lack of involvement with the issue, which is what caused the protest to break out in the first place.

The TRON Foundation announced a $20 million TRX buyback, one of the biggest in the industry to date.