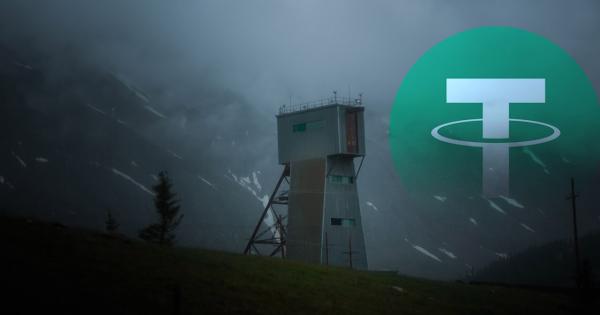 One obscure exchange dominates half of all Tether trading volumes. Meanwhile, top-tier exchanges saw their largest decline in volume to date.

Half of all USDT traded on D-rated exchange

The data-driven analysis provided by CryptoCompare is an invaluable asset to those monitoring the crypto-sphere. The company’s monthly reviews offer a fresh perspective on the state of the crypto industry and are often indicative of larger trends that might have otherwise gone unnoticed.

The company shared its August report with CryptoSlate, where it noted that the trend that emerged earlier in July has continued throughout the summer. The focus of last month’s report were low-tier crypto exchanges, which seem to have completely overtaken the crypto market.

Last month, despite aggregate page views across exchanges seeing a 13.7 percent decline, Binance and Coinbase saw a significant increase in web traffic. According to Alexa data, the two exchanges saw the number of their daily unique visitors increase by 68.5 and 123.6 percent since July.

The increase in web traffic could be explained by the increased media coverage of top-tier exchanges. As household names, Binance and Coinbase serve as a perfect starting point for those just entering the crypto industry.

Stablecoins have also seen an increase in use. In August, BTC/USDT represented 71.23 percent of total volume traded into both fiat and stablecoin. Despite controversies, USDT continues to be the most popular stablecoin for Bitcoin trading, followed by USDC, PAX, and TUSD.

However, increased market dominance doesn’t mean that BTC/USD is at its highest. The report showed that BTC trading into USDT was down almost 15 percent since July, totaling just under 8 million BTC. 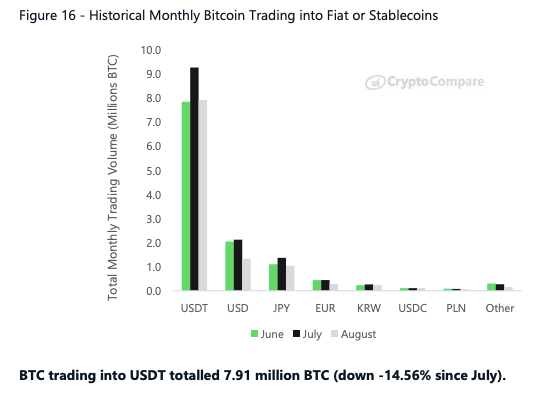 Unlike regular cryptocurrency exchanges, trans-fee mining exchanges refund the fees paid by traders in the form of the exchange’s native token. While popular with traders, these exchanges have faced criticism from industry experts and were often compared to Ponzi schemes. These exchanges also incentivize wash trading.

Last month, Bitmax saw the trading volume of these two pairs increase drastically and then drop abruptly at the beginning of September. 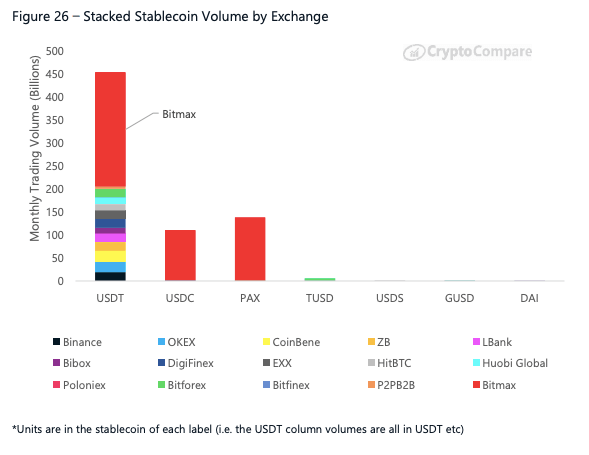 It is still unclear what caused such a significant rise in stablecoin-to-stablecoin trading volume on Bitmax. Once the volume dropped at the beginning of the month, trading volume for USDT was made up of Bitcoin at roughly 50 percent of the market, followed by all other USDT markets. CryptoCompare’s report said that this proportion is closer to what is expected from a crypto-to-crypto exchange, showing that August was a strange anomaly.

CryptoCompare confirmed that crypto traders still prefer small and riskier exchanges over the high-volume, regulated ones. The report showed that exchanges with D-E ratings represented 71.1 percent of the total trading volume in August, or around $473 billion.

For BTC/USD and BTC/USDT trades, D-rated exchange LBank saw an average trade size of roughly fourteen times that of AA-rated Coinbase, the report showed. This is an exceptional number considering the fact that LBank traded an average of 11,000 trades per day, while Coinbase traded around 68,000 trades per day.

One of the few fiat exchanges that saw an increase in trade count is Liquid. The exchange had the largest average daily trade count of 746,000, which is a 48 percent increase from July. However, the exchange had the lowest trade size of around 0.03 BTC, which is dwarfed by average trade sizes smaller exchanges such as itBit, Gemini, and Bitstamp saw—0.43, 0.34, and 0.46 BTC respectively.