The team behind RSK, the smart contract platform developed as a side chain of the Bitcoin blockchain, has announced the launch of an interoperability bridge with Ethereum. 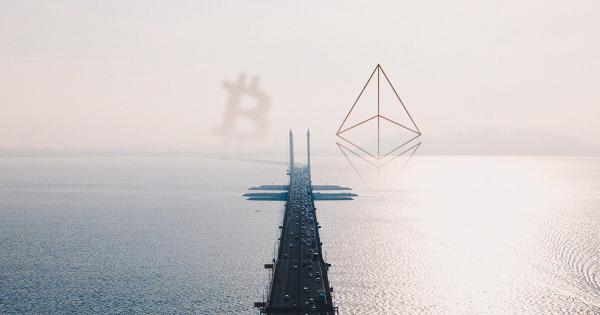 The team behind RSK, the smart contract platform developed as a side chain of the Bitcoin blockchain, has announced the launch of an interoperability bridge with Ethereum. Users could already send BTC into dApps developed on the RSK platform, but from now on, this functionality is also available on the Ethereum blockchain.

The move represents a further step forward for interoperability between blockchains, which has been identified as a critical priority for driving future development and adoption of the technology.

Interoperability is becoming one of the most significant challenges facing blockchains. As Ethereum’s core developers continue to work on a solution for the network’s scalability challenges, many other projects such as Plasma or Matic Network have sought to overcome these issues using innovations such as side chains or state channels.

However, interoperability offers another solution. Tokens passing from Ethereum to other blockchains can potentially benefit from increased transaction throughput and lower fees. RSK currently handles hundreds of transactions per second, far higher than Ethereum, which is stuck at 15 until the Eth 2.0 upgrade is implemented.

Developers on the RSK network will also get access to Ethereum’s user base. As the home of decentralized finance, this offers significant opportunities for RSK-based DeFi projects such as Money on Chain. The project will be the first to use the bridge to cross its Bitcoin-backed US dollar-pegged stablecoins into the Ethereum ecosystem.

Token supply is kept constant, as the Money on Chain coins are locked on the RSK blockchain, while new ERC-777 coins are minted on Ethereum at the moment they cross over.

Despite the vast majority of DeFi being based on Ethereum, the movement is facing an existential crisis due to the lack of forthcoming scalability solution, or visibility of when one will be available. Meanwhile, DeFi adoption is growing at an exponential rate. To take one example, the value locked in Synthetix’s decentralized derivatives platform has risen from around $25m in June 2019 to a peak of $175m by the end of the year, according to the data aggregator DeFi Pulse.

However, derivatives trading can be extremely fast-paced, with some traders relying on high-frequency trading algorithms to profit from moment-to-moment movements in the markets. Therefore, it’s easy to see how a lack of scalability or interoperability solutions would quickly choke the growth of a dApp like Synthetix, should user adoption continue at the current rate.

Decentralization is also another factor to consider when moving tokens between blockchains. Across the entire blockchain sector, many ecosystems such as EOS are dependent on only a handful of nodes to run the network, while Ethereum and Bitcoin are the darlings of decentralization purists. Despite being based on the Bitcoin blockchain and merge-mined with Bitcoin, RSK has stated that its interoperability bridge won’t be fully decentralized until later this year.

However, this may not prove such an issue for DeFi enthusiasts, given that many DeFi dApps have demonstrated themselves as subject to central control. Decentralized margin lending platform dYdX came under criticism last year when it implemented a forced transition from DAIs new multi-collateral stablecoin to the single collateral DAI.