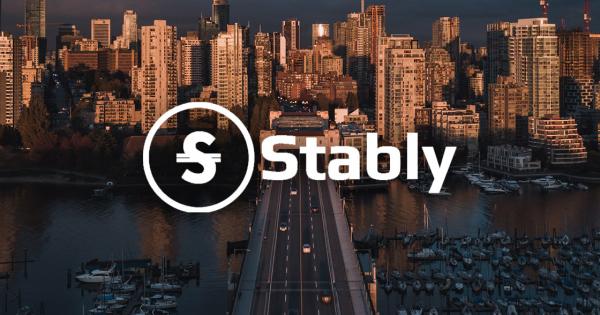 Photo by Spencer Watson on Unsplash

Based in Vancouver, Canada, Stably is a venture-capital backed startup that is on a mission to bring stability to the volatile cryptocurrency market. Backing every coin with a one-to-one parity to the US dollar, StableUSD aims to be the solution to cryptocurrency mass adoption as a secure, consistent medium of payment.

The Team Behind Stably

Stably Co-founders Korey Hoang and David Zhang met at an algorithmic traders meetup in Seattle a few years ago when cryptocurrency just started to take hold.

Early on, the two discovered stablecoins as a sub-class of cryptocurrency with massive market applications and decided to pursue a project, known today as Stably.

CTO and Co-founder of Stably, David Zhang described his thoughts when the opportunity presented:

“When blockchain came along it was like the perfect intersection for my software background and my game theory and economics background. It just seemed like a perfect once-in-a-decade type of opportunity.”

By creating a centralized and transparent reserve of US dollars, Stably plans to back every “StableUSD” token with a full unit of real currency.

Currently, there are two primary types of stablecoin: decentralized and centralized.

The main decentralized stablecoin models either rely on cryptocurrency as a reserve or use supply-based financial engineering to maintain a certain value.

In this case, the benefits of decentralization are countered by the model’s fragility, as the core infrastructure does not contain what CEO, Kory Hoang describes as “organic stability.”

Hoang describes his reasoning behind using a centralized over decentralized stablecoin model:

“Centralized stablecoin has what’s called organic stability. Organic stability means you have something in the reserve to back it… For example, this US dollar coin is backed by one real US dollar. Some coins out there aren’t backed by anything at all. If you back your stablecoin with crypto, it’s too volatile so you have to compensate by backing it with more collateral than necessary… There’s a lot of moving parts and fragility with this model. I think in the long-run as crypto markets mature, have more market cap, and the volatility dies down a little bit, this stablecoin model will make more sense and be more viable. But at the current moment, I just don’t see how major payment providers would integrate with that.”

Centralized stablecoins rely on a reserve of real currency for backing and their stability is also maintained through a deep network of market makers and liquidity providers who arbitrage them in high volumes to peg the stablecoin as close as possible to $1.

Hoang added to his statement and explained how StableUSD will eventually reach a minimal cost to the user:

“From a market standpoint, the value of our token is pegged to a dollar because market makers, arbitragers, and liquidity providers are always trying to keep it at a dollar because they stand to make a profit by doing that. Over time as we grow, more people will start doing that and the product of our token will lead to a spread decrease. So if you want to buy our token off an exchange, you can get it closer to a dollar for something like $0.999 instead of $0.98 or $0.97… The bigger it gets, the more popular it gets, the cheaper it will be for the client.”

The issues that arise with current centralized stablecoins are large fees and the lack of an option to exchange directly for crypto instead of fiat, two problems that Stably aims to resolve with their deployment of StableUSD.

When asked what the advantages of Stably were over competing centralized stablecoin providers, CEO, Kory Hoang replied:

“They [competitors] charge fees of .1% or higher… For us, we won’t charge any fees. We want to provide as little friction as possible for people to use our product. I also noticed that they don’t accept cryptocurrency to sell stable coins to people… In our long term plan, after we launch the basic fiat channel we’ll launch the crypto channel where people can send us ethereum to buy our stablecoin or they can redeem our stable coin for ethereum… That is more suitable for the retail market.”

Unlike many other stablecoin providers, Stably plans to deploy StableUSD across multiple blockchains, initially starting with the Ethereum and Stellar Lumens networks.

When asked why Stably chose the two platforms, Zhang stated:

“We wanted to address 90% of the use cases right off the bat, and the biggest use cases are decentralized applications and money transfers. For stuff like payments and stuff that needs large amounts of money transfer or high volume, Stellar was the obvious choice for us because that’s what the whole network is built for.”

Why Use Stablecoins At All?

Still in its early stages, cryptocurrency markets worldwide remain too volatile for use of cryptocurrency as a medium of exchange. What one Bitcoin buys today could buy more or less tomorrow.

In order for mass adoption of cryptocurrency to take hold, a stable method of value transfer must exist. Stablecoins attempt to provide the benefits of blockchain without the volatility of cryptocurrency, creating a bridge between the fiat and crypto world.

“Stablecoin is just money, stable money. You can use bitcoin or ethereum to make payments but they’re not stable… they don’t act like a true currency… they’re more like commodities, more like gold… For our stablecoin, once we get a lot of market cap and a lot of reserve… people can start integrating stablecoins onto their platforms. Think of stablecoins as the basic building block.”

“Basically stablecoins can be used in any use cases that require money. The reason we built our stablecoin on multiple blockchains is because we want to be that value transfer layer.”

Stably aims to use StableUSD on the Ethereum and Stellar Lumens networks and has just released a beta sign-up for institutional users and partners.