According to Tether, recent allegations that its executives are facing a criminal probe into bank fraud are just an example of continued pursuits to discredit the high-profile project. 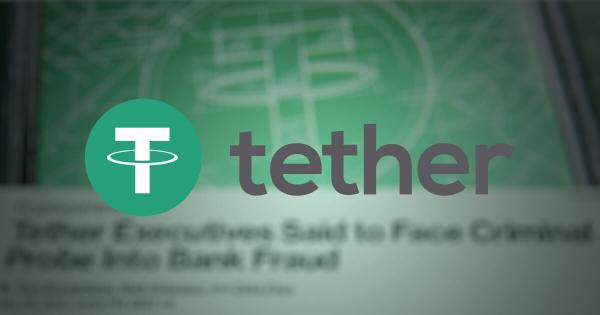 The recent report about Tether (USDT) facing a criminal probe in the US, published by Bloomberg and covered by CryptoSlate, received a snappy response, in which the issuers of the largest stablecoin claimed the alleged accusations don’t constitute news but are published as clickbait.

According to the report that cited three unnamed sources with direct knowledge of the matter, the US Department of Justice (DoJ) investigation is focused on conduct that occurred years ago, scrutinizing whether Tether failed to disclose to banks that transactions were linked to crypto.

The article is “patently designed to generate clicks,” read the response, stating that the report is consistent with the pattern of recycling out-dated claims as news.

“The continued efforts to discredit Tether will not change our determination to remain leaders in the community,” said Tether issuers, who revealed the makeup of its reserves in May, reaffirming that “Tether routinely has open dialogue with law enforcement agencies, including the U.S. Department of Justice.”

Even though the response statement underlines Tether’s “commitment to cooperation, transparency, and accountability,” its issuers still haven’t produced an audit.

The article’s response prompted the debate on Twitter, ranging from advice on how to handle clickbait accusations, to effective solutions on how to tackle the recurring skepticism.

Lawsuit imediatly. Enoug of this reta***d media who only sustains itself with clickbaits. Destroy them !!!!

get audited by big 4 accounting firms instead of some random firm you find on craigslist. Then no one will question you ever again

“We are proud of our role as industry leaders in promoting cooperation between industry and government authorities in the U.S. and around the world,” read the issuer’s response to the controversial article, which finally wrapped up in a casual tone, with reassurance.

“It is business as usual at Tether, and we remain focused on how to best serve the needs of our customers.”

According to Tether’s general counsel Stuart Hoegner, the long-anticipated audit appears to be only “months away.” But regardless of the content, it would definitely provide mainstream media with “news.”

According to undisclosed sources, Tether executives are facing a criminal probe into bank fraud. 2 min read

Despite positivity surrounding USDC, Tether is the top dog, and based on current metrics, will remain that way for the foreseeable future. 3 min read

Cardano’s Charles Hoskinson says Tether is a “faith based” crypto

Tether has soared since settling with the NYAG, but analysis of its reserves shows less than 3.9% cash on hand. 2 min read