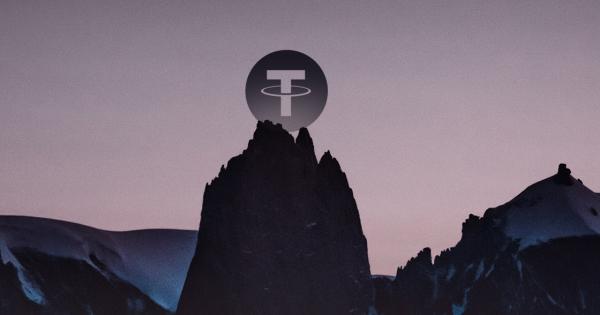 Gains in stablecoin dominance indicate that the market outlook is bleak. Tether is now fourth by market capitalization with a total of over 1.8 billion USDT in circulation, while market dominance of stablecoins sits at highs of 2.3 percent.

The percentage dominance (by market capitalization) of stablecoins is correlated with the health of the market. During bear markets, money leaves from Bitcoin and other altcoins and is converted into fiat, or held on standby in Tether and other USD-backed tokens.

At the moment, total market capitalization is roughly $104 billion, with stablecoins comprising $2.4 billion of that total, a 2.3 percent market dominance. Tether (USDT) continues to oscillate between fourth and fifth with Stellar (XLM).

As the ‘crypto winter’ continues, the USDT in circulation peaked at 2.8 billion until major sell-offs in mid-October. At that time, Tether supply plummeted by 36 percent to 1.8 billion.

Redemption was mainly triggered by weak market sentiment. Adding to that figure, Tether is also involved in a scandal for allegedly debasing the USDT token. Consequently, two competitors introduced in October, USD Coin and Gemini Dollar, also absorbed some of Tether’s market capitalization.

Change Since the Beginning of Q4

At the beginning of Q4, the overall market capitalization was $229 billion. At the time, stablecoins in circulation amounted to $3.5 billion, just 1.5 percent of the market. The increase from 1.5 to 2.3 percent dominance represents a 53 percent increase in stablecoins in circulation relative to overall market capitalization. Sharp increases in stablecoin dominance is correlated with a down market, and may even signal impending price swings.

Stablecoins, fully backed one-to-one by dollars, have another interesting property. Theoretically, if an issuer’s stablecoins were redeemed, all those fiat dollars would be available for return to token holders.

In contrast, if the majority of a cryptocurrency’s supply is dumped on the market, the price would plummet. Consequently, in such an event, token holders would only extract a fraction of the total market capitalization in fiat. Thus, if these stablecoins re-entered the market into Bitcoin, XRP, Ethereum, or other altcoins, the overall market capitalization would likely increase as a result of demand-driven price increases.

Overall, the high percentage of the stablecoins to crypto ndicates a bearish market.. These holders are shying away from holding more volatile Bitcoin, XRP, and Ethereum in fear of further price declines.

However, USD-backed coins indicate this money has easy-access back into the market. If market sentiment reverses, perhaps the cash on the sidelines could contribute to further price appreciation and potentially take crypto out of its trough.

The stablecoin Tether has been the subject of controversy, speculation, and what some are calling “weaponized FUD” in recent weeks.

According to transaction data from Tether’s accounts, it took 500 million USDT permanently out of circulation on Wednesday.