Ripple’s CEO is up in arms over Bitcoin and Ethereum: here’s why 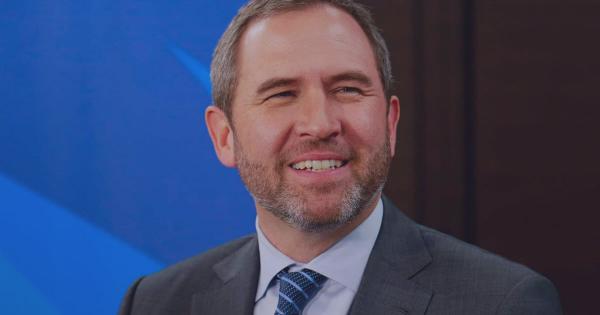 One key aspect that makes Bitcoin different from fiat currencies is that it is mined; those that want to mint BTC must put computational power to work and spend electricity to do so, which comes in stark contrast to fiat money, which can be infinitely printed and without much “work.”

Although many say this is what makes this mining is what imbues Bitcoin with much of its fundamental value over fiat, an industry executive has recently come out against mining, calling it a crucial factor in the “growing climate crisis.”

It’s no secret that Bitcoin isn’t the most popular asset; many economists and technologists around the world are highly skeptical of the cryptocurrency for many reasons. One of the oft-cited reasons is that it is “killing the Earth.”

Brad Garlinghouse, CEO of Ripple Labs, recently weighed in on this debate, supporting the critics that say Bitcoin’s (and Ethereum’s) energy consumption through mining is a “massive waste.” He elaborated:

“There’s no incentive to take responsibility for the carbon footprint [of crypto mining]. Absolutely [mind-blowing] that this isn’t high on the agenda for the growing climate crisis.”

Energy consumption for BTC and ETH mining is a massive waste and there’s no incentive to take responsibility for the carbon footprint. Absolutely 🤯 that this isn’t high on the agenda for the growing climate crisis… https://t.co/psR77m78Ua

He made this comment in reference to an article from The Telegraph, which suggested that a single BTC transaction “is the same as 780,650 Visa transactions,” per data from PWC.

Although the numbers seem to back Garlinghouse’s assertion, many have pushed back against the sentiment.

For instance, legendary Bitcoin proponent and educator Andreas Antonopoulos wrote in 2016 that holiday lights surrounding the trees and homes of millions across the globe use “more energy in a week than [entire] small nations,” before rhetorically asking “who’s wasteful?”

Tis the time of year to discuss "wasting energy". Bitcoin mining? No, Xmas lights. More energy in a week than small nations. Who's wasteful?

Not to mention, a 2019 report from crypto fund manager CoinShares found that 77.6% of all Bitcoin mining is powered by renewable energy sources, especially hydroelectricity in places like China’s Sichuan region, the west coast of the U.S., and Canada.

Garlinghouse’s latest critique of crypto-asset mining comes just weeks after he said that “China controls the Bitcoin blockchain,” before elaborating that there are “four miners in China that represent 60 percent or more of total mining capacity for Bitcoin, and 80 percent of the mining capacity for both Bitcoin and Ethereum is based in China.”

Still a fan of Bitcoin

Despite Garlinghouse’s skepticism regarding Bitcoin mining, he remains a fervent believer in the godfather of cryptocurrencies, so to say.

Speaking to the Wall Street Journal during 2020’s World Economic Forum in Davos, the fintech entrepreneur remarked that he is “bullish on BTC as a store of value.” 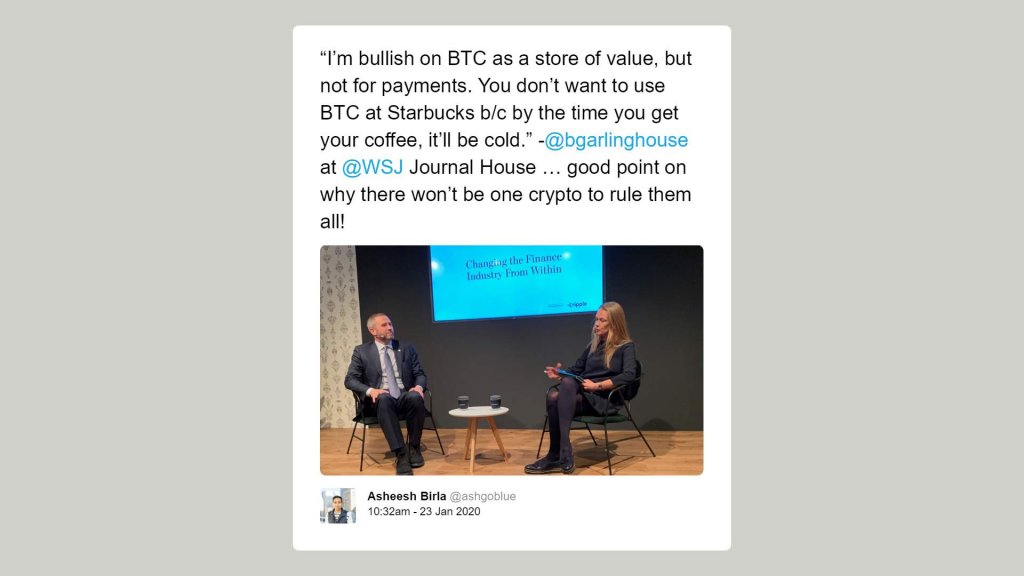 He did, however, throw cold water on the narrative that BTC’s primary use case is to be a medium for day-to-day transactions, quipping that using Bitcoin at Starbucks will mean “by the time you get your coffee, it’ll be cold” — referencing the blockchain’s ten-minute block times.

Ripple CEO blasts concentration of Bitcoin miners in China, but his critique misses the mark

The global markets have been rattled by the rapid spread of the Coronavirus (COVID-19), which has led the US equities markets to see an intense selloff over the past seven trading sessions.

Over the past few years, a class-action lawsuit has been building against Ripple Labs, the San Francisco-based fintech company that is known in crypto for its involvement in XRP.