The TRON Foundation announced a $20 million TRX buyback, one of the biggest in the industry to date.

As part of TRON’s first “independence day” anniversary celebration—the day when the Foundation completed the TRX token swap from the Ethereum blockchain to its own—CEO Justin Sun held a live stream where he revealed one of the most ambitious token buybacks in the industry. 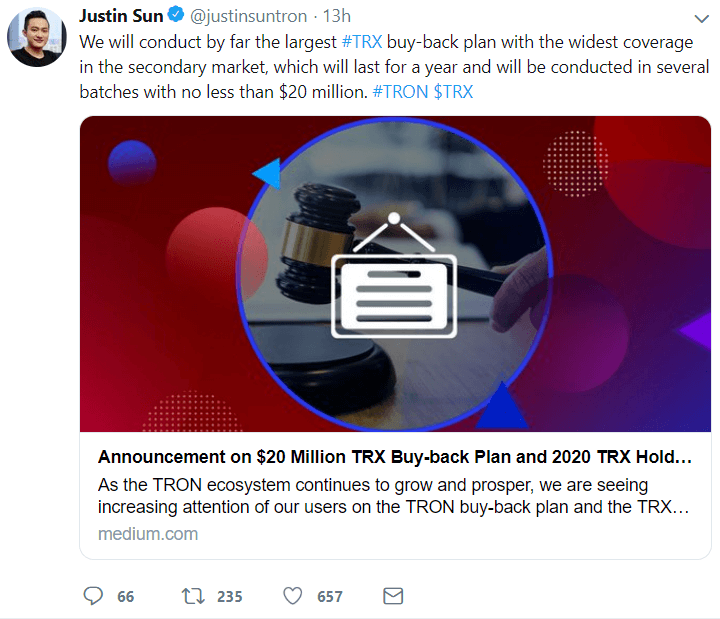 Over the next year, the TRON Foundation plans to spend $20 million repurchasing TRX in different batches in the secondary market at market prices. Even though the Foundation’s token holdings will be unlocked on Jan. 1, 2020, the non-profit organization has “no specific plans” on what to do with them and claim they will actually “continue to add more TRX to its holding.”

As part of last year’s migration to its own protol, 1 billion tokens worth $50 million, at the time, were burned to honor the event. Now, the TRON Foundation controls of 32.79 percent of the total supply of 99.4 billion TRX—worth over $1.2 billion at current prices.

The token buyback and the Foundation’s statements on adding TRX to its reserves are likely to address concerns around its control over the token supply. Considering the size of the Foundation’s reserves, there is a risk of falling token prices should the organization choose to convert its holdings into fiat.

Nonetheless, TRON advertises that it has made substantial progress, as evidenced by its bimonthly mainnet upgrades. So far TRON has added more than 500 dApps over the last year, mainly around gaming, to its platform with an average daily transaction volume of $15 million.

Carbon is the first fiat-backed stablecoin to launch on TRON

There’s no doubt the XRP cryptocurrency has a dedicated fan base; heck, the cryptocurrency community has fittingly branded supporters of the asset the “XRP Army.” But the altcoin has equally as many skeptics who believe the asset is intrinsically worthless, like how some see Bitcoin as an asset really worth $0.

Ethereum has been caught within a firm uptrend in recent times that has allowed it to gain some serious ground against Bitcoin in recent weeks.

Bitcoin’s price action over the past few weeks has undoubtedly been impressive.