Chainlink (LINK) was one of the most bullish cryptocurrencies throughout 2019 and 2020, with the crypto racing from its year-to-date lows of $1.70 to highs of nearly $5.00, before facing a significant selloff that has since sent it reeling down 60 percent. 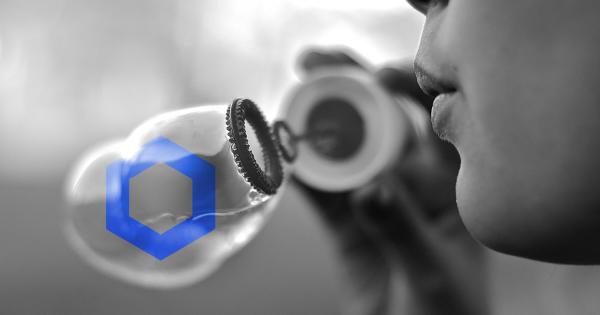 Chainlink (LINK) was one of the most bullish cryptocurrencies throughout 2019 and 2020, with the crypto racing from its year-to-date lows of $1.70 to highs of nearly $5.00, before facing a significant selloff that has since sent it reeling down 60 percent.

This intense decline has led it to erase virtually all of the gains incurred throughout the course of its unprecedented rally seen over the past couple of months, signifying that the LINK bubble has burst.

Analysts are now noting that this ongoing selloff is likely to extend further in the days and weeks ahead, with one analyst noting that he is eyeing significant losses against Chainlink’s BTC trading pair.

At the time of writing, Chainlink is trading down just under one percent at its current price of $1.87, which is around where it has been trading at for the past couple of days.

The current consolidation phase that LINK appears to be caught within likely stems in part from that which Bitcoin is currently caught within, with the benchmark cryptocurrency trading sideways within the lower-$5,000 region for the past few days.

Chainlink’s price has cratered over the past couple of weeks, dropping from highs of just under $5.00 to its current price level – marking an over 60 percent decline.

Although it does appear that it has been able to establish some support around its current price level, the precarious position that the aggregated market is in seems to suggest further downside could be imminent.

Analyst: LINK could be positioned to decline further as key support weakens

It now appears that Chainlink has reached a key support level against its Bitcoin trading pair, with a break below this level opening the gates for significantly further downside.

Michaël van de Poppe – a former full-time trader at the Amsterdam Stock Exchange – spoke about LINK in a recent tweet, noting that he believes its current support could lead to a short-term relief rally, but that this will ultimately lead it to plummet lower.

“Chainlink crushed as well. But on support here on the BTC pair. A relief rally towards 38000 or 41500 satoshis could be possible here. However, after that, I expect a further drop towards 31500 or 27100 satoshis.”

This would mark a notable decline from its current BTC price of nearly 36,000 satoshis, but is a real possibility – especially if Bitcoin and other major altcoins decline lower in the near-term.