The number of “untouched” Bitcoins increased significantly over the past five years, according to recent data from CoinMetrics. 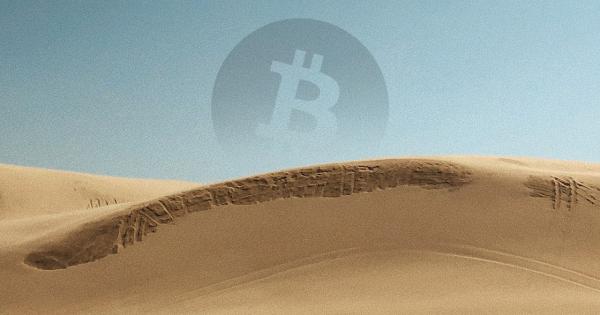 The number of “untouched” Bitcoins increased significantly over the past five years, according to recent data from CoinMetrics. Nearly 4 million BTC, an amount currently valued at around $40 billion, has not moved from wallets that may be holding the cryptocurrency as a store of value.

Matt Odell, a digital currency analyst and co-host of the Tales from the Crypt podcast, confirmed that the amount of bitcoin being held, for the last five years, in wallets (i.e. not transferred to other crypto addresses) has reached an all-time high.

"The amount of Bitcoin (BTC) supply that has been untouched (i.e. not transferred) for at least five years recently reached an all-time high. This potentially signals that BTC is increasingly becoming a store of value, as opposed to a medium of exchange."https://t.co/GGrqOZHmnT pic.twitter.com/TwJG18lFp7

Large institutions may begin holding the majority of Bitcoin

Odell believes the increasing number of Bitcoins held over five years indicates that BTC is increasingly being used as a store of value instead of as a medium of exchange. Several analysts have mentioned that Bitcoin may also serve as a hedge against instability in the global financial system. This could potentially be another reason why many new investors may have allocated a certain percentage of their portfolio to Bitcoin-related investments.

However, crypto analyst Willy Woo pointed out that if the number of Bitcoins being held continues to increase, then it would lead to low levels of circulation. As a result, BTC’s volatility might increase considerably, which could potentially make the crypto’s price movements look similar to that of the gold bullion, Woo argued.

Why does the Gold trade like a shitcoin but over 100 years instead of 100 weeks? pic.twitter.com/z9HymGYQPd

Probably the greatest risk to Bitcoin's dream is concentration of coins to a few hands, they'll be the new bankers.

Woo, a partner at Adaptive Capital, believes there’s a chance that most of Bitcoin’s circulating supply could end up being controlled by a few “whales,” or large holders. The analyst’s concerns may seem valid given that Grayscale Investments reportedly holds around 1 percent of the cryptocurrency’s circulating supply, or 203,000 BTC (appr. $2 billion at current prices).

Meanwhile, Block.one, the firm behind EOS’ colossal $4 billion ICO, had reportedly been holding approximately 140,000 BTC, which is currently worth about $1.4 billion.

10 million Bitcoins haven’t moved in the past year

The untouched supply of Bitcoin grew steadily during the crypto market bull run of late 2017 and early 2018, according to CoinMetrics’ report. Researchers at the American analytics firm tracked BTC’s circulation during a 180 day, one year, two year, and five year period.

The number of Bitcoins that haven’t moved in the past year is also at an all-time high, with over 10 million BTC being held by various entities. This means that more than 50 percent of the Bitcoin mined so far has not been used to conduct transactions in over a year.

Research published by digital forensics firm, Chainalysis, in November 2017 revealed that between 3.79 million to 2.78 million bitcoins may have been lost permanently. These figures imply that as much as 25 percent of BTC’s total circulating supply might not be accessible.

Chainalysis’ estimates were made after segmenting the amount of BTC in circulation based on age (when the Bitcoins were created) and transaction activity. For certain segments, the firm’s researchers used statistical sampling to determine the number of Bitcoins lost.

After accounting for Bitcoins being held by Satoshi Nakamoto and long-term investors, the report concluded that up to 3.79 million BTC was likely lost due to mismanagement of private keys and seed phrases.

When the full 21 million cap is reached, the real supply will actually dwindle. Users will continue to lose their keys and small amounts of Bitcoin (dust) gets lost in addresses when transaction fees exceed the value of the satoshis, further emphasizing the scarcity of the crypto asset.