Circle’s USD Coin is silently closing the gap to Tether 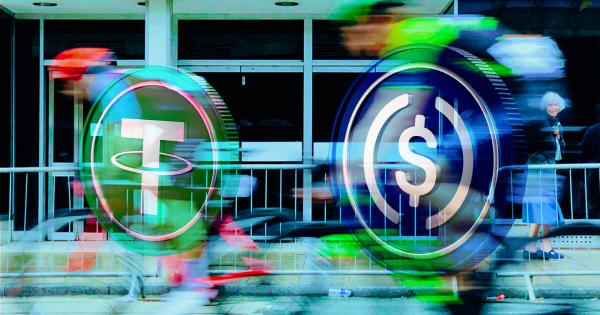 Tether’s dominance as the largest stablecoin in the crypto space is quietly being eroded by the growth of Circle’s USD Coin (USDC), which now controls around 30% of the stablecoin market.

According to available data, USDC now has 50 billion units in circulation, cementing it as the second-largest stablecoin by market cap.

Per Jeremy Allaire, the co-founder and CEO of the stablecoin issuer, what makes the current growth more commendable is the fact that the USDC ecosystem is thriving and “winning the digital currency space race.”

A look at the figures released by Allaire would show that USDC had over 4 million active addresses in 2021 and at the same time, the stablecoin was involved in nearly $2.5 trillion worth of transactions in the same year.

All of this, cumulatively played a role in its “10,000% growth over the past two years.”

A look at data from Etherscan would show that USDC’s current supply on Ethereum is beating that of USDT. As of press time, USDC has over 44 billion tokens in circulation while that of USDT stands at around 39 billion tokens.

Aside from flipping USDT supply on Ethereum, USDC is also steadily gaining ground on its rival in the total Stablecoin supply stand. Presently, there is $177 billion worth of stablecoins in circulation; of this, Tether controls 47% of the market while USDC controls 29%.

As of last year, Tether had near-total domination of the space as it controlled 74% of the market while that of Circle was just around 16%.

Data from Coingecko would also show that while USDC grew by 987% in 2021, USDT only recorded a growth of around 280%.

There is no denying the fact that despite USDC’s impressive growth in recent times, Tether’s USDT remains the dominant stablecoin in the crypto market.

This can be seen in the trading volume of both assets within the last 24 hours where USDT recorded around $37 billion trades while that of USDC was just around $2 billion.

However, like we pointed out earlier, Tether’s dominance in the market is being eroded largely thanks to its regulatory issues that forced regulators to slam it with a $41 billion fine last year.

According to the details provided, Tether made misleading statements about its reserve to customers.

The firm declared that it had $1 in reserve to back every token but the regulators revealed that between June and September 2017, the crypto firm only had around $60 million in its reserve while there were over 400 million coins in circulation.