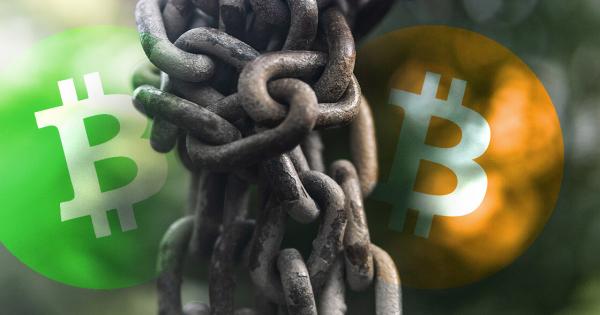 Bitcoin Cash’s claim to fame is scaling via bigger 32MB blocks. Yet, it seems miners are limiting block sizes below 2MB—similar to Bitcoin‘s limit—raising questions about the advantages of BCH.

Primer on the block size debate

In August 2017, Bitcoin Cash forked from Bitcoin core after a coalition of developers, lead by Roger Ver, disagreed on how to scale the original cryptocurrency.

Ver advocated for 32MB blocks as a way to scale the protocol “on-chain” without any additional add-ons like Lightning Network or SegWit. Meanwhile, core developers argued that increasing the block size would decrease the decentralization of the network, notably by putting more computer-resource demands on node operators.

Surprisingly, it appears that BCH functionally has a similar block size limit to BTC. Within the last two days, Bitcoin Cash had 270,000 unconfirmed transactions in its ‘mempool’ (transaction queue) from an unexpected surge in traffic. These transactions occupy about 50MB in block space.

Given 32MB blocks, this should have taken 2 blocks to clear. Yet, it took a full 15 blocks for the BCH network to clear these transactions. What is going on?

Although 32MB blocks are technically valid on the Bitcoin Cash network, the mining software for the protocol has the default block limit set to 2MB. Many miners, including some of the largest mining pools (which seems to include Roger Ver’s Bitcoin.com) are not changing the limit upward. Even worse, many of these miners are the same miners who advocated for big blocks.

Now this raises serious questions. As profit-maximizing entities, one would think that miners are incented to include as many transactions as possible.

However, even transaction inclusion is a cost—albeit a tiny one—said an expert on public blockchain networks to CryptoSlate. This is the same reason why miners will seldom include transactions without a fee attached. The cost simply outweighs the benefit. For BCH, miners are already ignoring transactions with fees of 1 satoshi per byte ($0.0006 per transaction).

Now, because BCH has much less traffic than BTC, both in terms of total transactions and dollar value of transactions settled, a healthy fee market has yet to develop on BCH. And, because the fees are so small there is little incentive to include transactions given the extra hassle for miners. As said by one concerned community member:

“Bitcoin is totally about incentives. The fee reward is so low compared to the block reward that they do not bother increasing their block size. Whether they mine a 1 MB or 22 MB block it’s pretty much the same reward to them. Why the additional propagation headaches associated with larger blocks?”

The difference is clear when comparing transaction fees collected by miners. For clearing those 270,000 transactions, over the 15 blocks miners collected a paltry $150 in fees, or $10 per block.

In contrast, at its lowest Bitcoin miners were rewarded anywhere between $2,000 and $7,000 for a single block over the same time period, over 200-times the amount. The large difference in fees gives miners real cause to streamline their operations to optimize for the inclusion of transactions on Bitcoin, argued well-known anonymous BTC advocate StopAndDecrypt.

Although many assert that low fees are crucial for a cryptocurrency’s adoption as a method of payment, arguably the most important factor is a network’s security. And, low fees have the potential to undermine the security of a proof-of-work network.

Currently, the infrastructure (miners and node operators) for most public proof-of-work blockchains is predominantly funded via block rewards. These block rewards economically subsidize low-cost transactions by introducing additional coins into circulation. At its core, this means that coin holders are collectively subsidizing transactions on these networks.

To emphasize this point, theoretically if BTC block rewards were done away with entirely and miners were still making the same amount of revenue then each Bitcoin transaction would incur fees upward of $40. Keep in mind, this wouldn’t actually happen because it’s more likely that the overall hashpower (and thus security) of the network would decrease instead.

Such a drop in hash rate was recently observed on Litecoin. After its halving the hashpower of the network fell 30 percent.  As explained by Litecoin creator Charlie Lee in an interview with CryptoSlate, proof-of-work blockchains will ultimately have their networks supported by fees rather than block rewards over time as a result of halving events.

Based on revenue estimates, each halving for Bitcoin Cash should reduce its network hashrate by 25 to 50 percent.

Will BCH endure another 51% attack?

Bitcoin Cash is especially vulnerable to 51% attacks and recently suffered an attack in May. Since the coin only controls a minority of the hashpower for the SHA-256 mining algorithm, large miners can switch from mining BTC to BCH and conduct a 51% and pillage the network with few repercussions. For more information on this dynamic read “Hostile mining attacks on minority hash power coins.”

With each additional halving the situation becomes even more precarious. Without a robust fee market to support more hashing power, each BCH block reward halving will reduce the resources needed to attack the network. In short, each halving means a smaller and smaller coalition of miners can ransack Bitcoin Cash.

The only reasonable solution seems to be changing away from the SHA-256 mining algorithm (similar to how Litecoin intentionally chose the Scrypt mining algorithm, shared Lee). But, community members seem skeptical that this will happen without a disaster precipitating the switch.

Bitcoin Cash is expected to halve around April 2020.

Unfortunately, merely changing the default block size limit may not solve issues around Bitcoin Cash. As one active BCH developer argued, “there is not actual demand for anywhere close to 2MB.”

Combined with the low cost of fees, this results in scenarios where different services ‘dump’ transactions on the BCH network to take advantage of low-cost storage. This spam increases the cost to node operators, requiring them to purchase more equipment—raising the barrier of entry and further centralizing a network. The centralization dynamic is explained in further depth in this critique of big blocks on Bitcoin SV.

Vitalik Buterin even proposed that Ethereum should use Bitcoin Cash as a sort of data dumping ground for this reason. Such dumping is readily observable on Bitcoin SV, with 98 percent of transactions coming from a single weather app.

As such, increasing the block size limit through a forced change of the default mining software cap would make it easier for other services to spam the network with low-value transactions, suggested the developer.

Nevertheless, another community member argued that the recent surge in transactions should have been a “decisive victory” and a “demonstration of big blocks,” and that the miner-imposed limit prevented that from happening.

The BCH developer responded by saying that bigger blocks, despite their theoretical feasibility, are problematic for the network for multiple reasons.

If large blocks suddenly propagate they can cause nodes on the network to desynchronize, said the developer, similar to what was witnessed on Bitcoin SV recently. These desynchronizations can cause unintentional chain re-organizations and introduce additional vectors for mining attacks, said an expert on mining to CryptoSlate.

Most concerning, if Bitcoin Cash were to actually use its 32MB block limit, a “good chunk” of all wallets that support BCH would “die,” said the developer.

“If we continuously pump 32MB blocks for instance, a good chunk of all wallet backends will die because they are not provisioned to handle a 300x load increase overnight (nor should they be expected to). You are just trading bad stuff against each others.”

Why pick Bitcoin Cash over Bitcoin?

Despite aggressive marketing from Roger Ver and others, it seems Bitcoin Cash doesn’t even take advantage of its purported 32MB big blocks. As one BCH community member summarized:

“At 2MB it’s as easy to disrupt BCH as it is the shitcoin BTC (even easier due to the low fees). The current congestion perfectly showcases that 2MB is inadequate. I didn’t dump BTC for a shitcoin that’s just as crippled in practice.”

In combination with lackluster network statistics and the heightened risk of mining attacks, it’s uncertain why users and investors would pick Bitcoin Cash over Bitcoin. Until these problems are addressed it seems unlikely BCH will be able to fundamentally compete with its predecessor.