The co-founder of Ethereum, Vitalik Buterin, proposed using Bitcoin Cash as a short-term solution for adding a data availability layer to Ethereum. 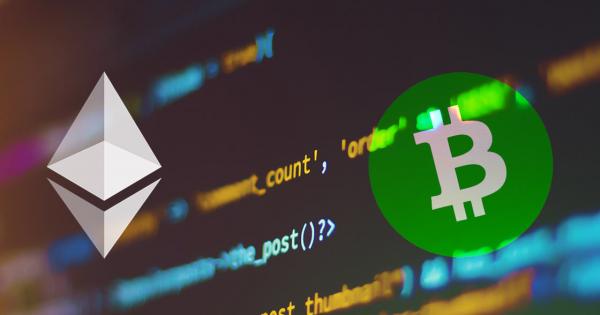 The co-founder of Ethereum, Vitalik Buterin, proposed using Bitcoin Cash as a short-term solution for adding a data availability layer to Ethereum. However, Buterin’s proposal was quickly met with heavy criticism, with many pointing out how seriously flawed the idea was.

The search for the ultimate scalability solution has led pushed blockchain companies to come up with some extremely innovative ideas. However, some seem to have gone too far in their search, suggesting ideas that would be almost impossible to implement in reality.

That is the case with a possible new Ethereum scalability solution. Suggested by Vitalik Buterin, Ethereum’s co-founder, the solution would help increase the network’s scalability by offloading much of its usage. While this sounds like a solid idea in theory, what Butalik is actually suggesting is using the Bitcoin Cash (BCH) blockchain as Ethereum’s data layer.

Buterin shared his proposal on the ETHResearch forum, saying that Ethereum’s long term scalability plan is going to be Ethereum 2.0. The network’s planned 10 MB/sec data throughput will be much higher than that of any existing blockchain, he said, which would effectively solve most of Ethereum’s scalability problems.

However, until Ethereum 2.0 sees the light of day, Buterin suggested developers started working on other scalability solutions that rely on a non-scalable computation layer combined with a scalable data layer.

The solution he believes is a “perfect fit” for Ethereum is Bitcoin Cash. Buterin cited BCH’s 32 MB per 600 seconds of data throughput and low fees as two of the biggest reasons why using it as a data layer for Ethereum would be perfect.

According to Buterin, Ethereum already has all the machinery it needs to verify Bitcoin Cash blocks inside of ETH, adding that verifying BCH blocks is much cheaper than verifying Ethereum Classic blocks. Another thing he said turned him towards BCH is the community’s “friendliness” to people using their chain for “whatever they want.”

The main weakness, he said, was BCH’s 10-minute block time, which is unlikely to change in the near future.

But, despite a very ambitious start, both Buterin and his Bitcoin Cash proposal found themselves at the receiving end of heavy criticism. The majority of those ridiculing Buterin’s suggestions seem to be adamantly against any cryptocurrencies other than Bitcoin, with some saying Ethereum and Bitcoin Cash were helping each other collapse faster.

Lovely, ETH and BCH helping each other to collapse faster

Some industry heavyweights also spoke on the matter, saying there was an abundance of problems Bitcoin Cash would bring and that a 10-minute block time should be the least of their worries. Andre Neves, the editor of Komenco Blog and Lightwork, said that BCH’s low hashrate and central controlling authorities should be more pressing matters.

"The main weakness of the BCH chain is its 10 minute block time". What about the low hashrate? Central controlling authorities? Extremely large blocks that lead to constant reorgs?

Eric Wall, a privacy tech advisor at the Human Rights Foundation, pointed out that Bitcoin Cash had a debilitating weakness that could prove to be fatal for Ethereum.

Uhh @VitalikButerin what about the weakness that it can be 51% attacked single-handedly by most BTC pools?

Buterin has been silent since posting his ambitious proposal on the ETH Research forum, so we are yet to see how he reacts to the rather unwelcoming response he got from the crypto community.