Charles Hoskinson describes Cardano’s 1.4 as the “most significant update to the Cardano ecosystem to date,” with the update featuring a host of high-caliber performance and functionality upgrades to the software. 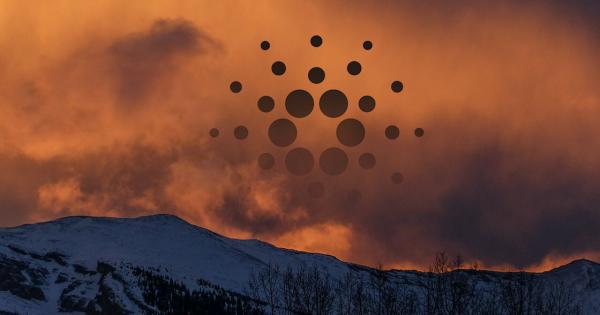 Charles Hoskinson describes Cardano’s 1.4 as the “most significant update to the Cardano ecosystem to date,” with the update featuring a host of high-caliber performance and functionality upgrades to the software. In addition to the update, IOHK has made rapid progress in other areas of the organization, including a restructuring of the Cardano Foundation following the resignation of chairman Michael Parsons.

Cardano 1.4 is an enormous overhaul of Cardano. The update signals the completion of Cardano’s ‘Byron’ phase of development, and based on comments from Charles Hoskinson (the CEO of the organization responsible for developing Cardano, IOHK) the update could indicate that Cardano is coming out of its software-developer-induced isolationism.

CryptoSlate reached out to IOHK and is scheduled to interview Charles Hoskinson for additional comments on Cardano’s upcoming features.

There are several important upgrades slated for the 1.4 upgrade. These upgrades include optimized block storage, a Cardano test network, full wallet support for Linux, and support of the Rust programming language. The update is scheduled to go live on Dec. 18th.

After seven release candidates and a huge amount of QA work, I'm pleased to announce that our best effort release date for Cardano 1.4 is December 18th. Daedalus users will get an in-client update notification next week. Thanks everyone for your patience and support

One of the most important updates for 1.4 is more streamlined storage for the blockchain. At the moment, a user needs to store roughly 1.5 million files to house the entire Cardano blockchain. Moreover, the storage requirements increase by an additional file with every new block produced.

The new update drops this number substantially, allowing users to get the same functionality with a mere 200 files. Furthermore, users will now only need to store a file for each epoch—a snapshot of the current set of miners taken approximately every 20 seconds, further reducing the amount of storage space needed.

More efficient storage means more actions can be done ‘locally.’ If the blockchain is stored locally on someone’s computer they can access it much more quickly (instead of accessing it slowly from the Cardano network). This will produce performance improvements for things that use the locally stored blockchain, such as wallet restoration, proof-of-stake mining, and synchronization with the online blockchain network.

Users can also benefit from the testnet. Any time there is a wallet upgrade to Daedalus (Cardano’s primary wallet), users can familiarize themselves in a test environment without risking real Ada.

Linux is the most widely used open-source computer operating system. Linux powers many of the world’s phones, servers, and supercomputers. Furthermore, cryptocurrency enthusiasts have a tendency to use Linux.

Daedalus is Cardano’s primary crypto wallet. The wallet has been available to public beta Linux users since Cardano issued 1.1. That said, after extensive testing and improvement, the full release of Daedalus for Linux is scheduled for the 1.4 release. The update will bring greater functionality and ease-of-use for Linux users wishing to transact in Ada or interact with the Cardano blockchain.

Rust is a low-level programming language used for things like computer chips, industrial machines, and other embedded systems. Rust is commonly used for ‘performance-critical’ code. The main selling-point of Rust is its built-in ‘safe code’ features, which prevent programmers from committing critical errors. The language is often compared to, and sometimes used in place of, C and C++.

According to IOHK, third-party developers who make iOS, Android, and web applications often use Rust. In the 1.4 update, Cardano will implement rust as an open-source sandbox that will allow developers to integrate and build their own products on top of the platform, including products for mobile devices. This would “further decentralize the ecosystem” by stimulating open-source development.

At the moment, the project comprises a command-line interface wallet and a software development kit. The Rust Github repository is currently open to code contributions from the community.

Cleaning Up the Cardano Foundation

Michael Parsons, the former CEO of the Cardano Foundation, has resigned following months of tumult between IOHK, Emurgo, and the Foundation. Between the three branches of Cardano’s governing bodies, the Foundation was tasked with driving adoption, releasing news, conducting evangelism, and marketing the project.

One incident escalated to the point where the community alleged that the branch failed in most of its responsibilities, saying that the Foundation “failed to build and lead a competent organization.

Charles Hoskinson and Ken Komada from IOHK and Emurgo agreed.

In a comment on the resignation, Hoskinson said that the community is “waking up the foundation and getting it where it was supposed to go,” a clear indication of movement in the right direction. Moreover, he cites in-fighting with the Cardano Foundation as one of the reasons why the marketing of the project has suffered. Now that the issues are getting resolved, users should expect Cardano’s marketing presence to improve.

Hoskinson is currently looking to introduce the concept of “Cardano Hubs,” community groups that come together to evangelize and get people excited about the project. The CEO mentions setting up hubs in places like Africa, South America, Asia, and the United States.

In the Development Pipeline

Following 1.4, IOHK, Emurgo, and the Cardano Foundation are looking to introduce a flurry of heavy-hitting features in the next upgrade cycle, code-named ‘Shelley.’ Some of these features include:

The above lineup of features is scheduled to go live in Q1 of 2019.

However, if the organization is able to deliver on its ambitious promises for Q1, that might change. The updates may bring on a new cohort of enthusiasts who are tired of the hype-first-product-later style of marketing which is common in the industry.

After operating without much publicity, the awakening of the Foundation—combined with a string of hard-hitting updates—could take Cardano to the forefront of the crypto platforms. Whether it will rival the likes of Ethereum, TRON, or EOS is another debate.