Bitcoin’s recent volatility has extended into today, with the cryptocurrency seeing massive volatility this afternoon when bulls attempted to push BTC back to $8,000, which was a movement that ultimately resulted in yet another rejection.

It is important to note that BTC has been able to hold above a key support level in the near-term, but analysts are still noting that it appears to be showing signs that it has formed a mid-term top, which could mean that it will begin posting a bear-favoring reversal.

Currently, Bitcoin is trading down over 2 percent at its current price of $7,875, which marks a notable decline from its daily highs of over $8,000.

Earlier this week bulls built a serious amount of momentum that carried BTC’s price as high as $8,400, which is where it met significant resistance that halted its rally and sent it reeling back down to lows of just under $7,800.

The price of $7,800 has been a historically important level for the cryptocurrency, as this is where it faced multiple rejections when it entered its prolonged bout of sideways trading a couple of weeks ago.

It now appears that this level has become a key near-term support region, as bulls have ardently defended BTC from posting a sustained drop below this level on multiple occasions over the past couple of hours.

Bitcoin was able to establish the lower-$7,000 region as a strong area of support prior to its recent upsurge, as this is where it found itself caught within an extended period of consolidation at the end of last year.

In the near-term, this may be the next price region that BTC targets, as Teddy — a popular cryptocurrency analyst on Twitter — explained in a recent tweet that its recent highs could mark a top for the crypto, meaning that the gains incurred throughout the recent rally could be in peril of being lost. He explained:

If buyers are unable to push BTC over the $8,000 region in the coming few hours and days, this bearish possibility could be validated and the crypto’s recent downtrend could continue to cut significantly deeper. 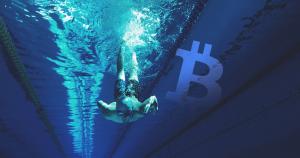 Cole is a freelance journalist based in Southern California, where he’s an undergraduate at the University of California, Irvine, studying philosophy. He focuses primarily on covering cryptocurrency and blockchain-related news. He owns a non-life-changing sum of Bitcoin and enjoys day trading.