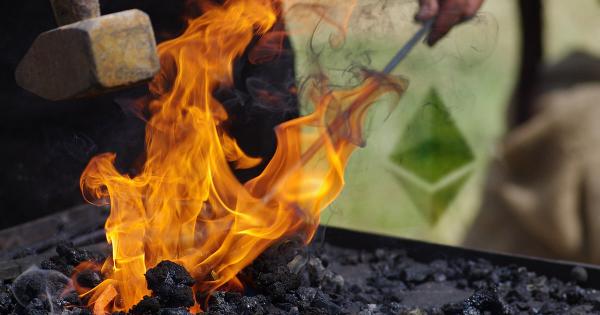 Image by Peter Freitag from Pixabay

The hype surrounding Ethereum has reached a boiling point in recent times, with growing network utilization and enthusiasm surrounding DeFi providing investors with legitimate reasons to be excited about the cryptocurrency’s future.

The imminent transition to ETH 2.0 is also widely looked upon by investors as a potential catalyst for further upwards momentum in the months ahead.

Although none of these bullish fundamental catalysts have actually triggered any notable price action, analysts still believe that the cryptocurrency’s macro outlook is incredibly bright.

One newly released data metric reveals that 95% of all Ethereum in existence is ready to be staked once the transition to a Proof-of-Stake consensus mechanism is completed.

The switch from Proof-of-Work (PoW) to Proof-of-Stake (PoS) is one of the hallmark features of the highly anticipated Ethereum 2.0 blockchain upgrade.

This new consensus system will allow users holding over 32 ETH to stake their tokens within validator nodes in exchange for rewards.

As CryptoSlate has reported previously, data shows that Ethereum investors have been busy at work building up their exposure to the cryptocurrency.

According to analytics platform Glassnode, the number of wallet addresses holding over 0.1 ETH has grown by nearly eleven percent since the beginning of the year.

“The number of Ethereum addresses (EOAs) holding at least 0.1 ETH just crossed the 3 million mark for the first time. It has grown by 10.9% since the beginning of the year.”

There has also been a notable uptick in the number of addresses holding over 32 Ethereum, signaling that investors are excited about the transition to PoS.

Report: 95% of all ETH now ready to be staked

According to recently released data from Arcane Research, it now appears that 95% of all existing Ethereum is now ready to be staked.

105 million ETH out of the total supply of 111 million are held within wallets eligible for staking. This means that these wallets are either owned by individuals who hold more than 32 ETH, or by exchanges who hold a massive quantity of the crypto on behalf of their users.

“When analyzing the same data…it shows that these wallets account for approx. 95% of all ETH… 105 million out of the total ETH supply of 111 million are held by these wallets.”

They note that the large quantity of the crypto held within exchanges is highly likely to place pressure on exchanges to enable pool-staking as soon as Ethereum 2.0 goes live.

“This will most likely pressure exchanges to enable staking as soon as the Ethereum 2.0 is live.”

These fundamental factors have sparked a massive Ethereum accumulation trend

Ethereum has been seeing a massive influx of new users and investors in recent times.