Despite price stagnation under $400, Ethereum fundamentals are still strong

Years after their respective forks, both Bitcoin Cash (BCH) and Bitcoin Satoshi’s Vision (BSV) have remained at the top of this nascent market, representing the fifth and sixth largest cryptocurrencies, respectively.

It’s clear, then, that the market places some value in these Bitcoin forks.

But a top investor in the cryptocurrency and blockchain space — the same investor that coined the now-ubiquitous term “crypto-assets” — has said that he sees no “compelling” reason to allocate capital to BSV.

In response to a critique from a member of the Bitcoin Satoshi’s Vision community that his firm doesn’t have exposure to the asset, Chris Burniske — partner at Placeholder Capital, a crypto-venture firm — said he has “never seen a reason” to hold BSV.

He elaborated in a later tweet that Placeholder’s partners have not seen a “compelling reason” to believe that BSV will “store-value over the long term, or be a commonly used consumable [or] transformable asset.”

Burniske added that the fundamental premise of BSV is flawed because he “also doesn’t see how you can claim it’s ‘Satoshi’s Vision’ when no one can reliably prove who, or what, Satoshi is.” 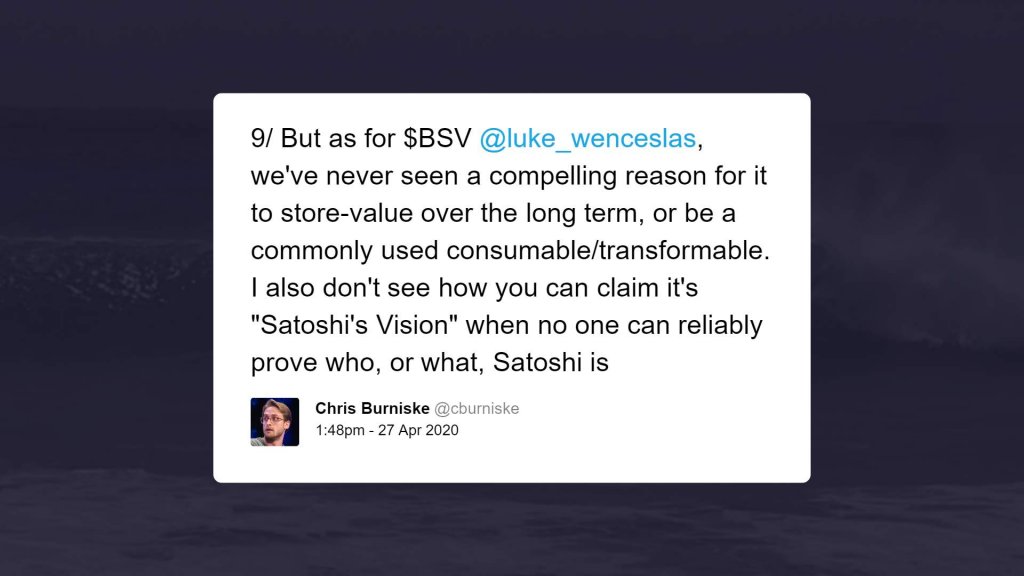 Burniske didn’t fully elaborate on why he has such sentiment regarding the leading Bitcoin fork, but the common rhetoric is that the cryptocurrency simply isn’t secure in a world where new mining machines are flooding the market en-masse.

Case in point: as reported by Crypto51.app — a website that tracks the cost of enacting a so-called “51% attack” on a blockchain to falsify or censor transactions — the cost to attack Bitcoin SV for one hour is a mere $8,237 as of the time of this article’s writing.

For some context, the cost to attack the original Bitcoin network for the same period of time, the site estimates, would be $640,767 — approximately 7,700 percent higher. The cost to attack Ethereum for one hour is $110,000, a whole order of magnitude higher than what would need to be spent for BSV.

This statistic is commonly cited by BTC maximalists trying to explain why investing in BSV or Bitcoin Cash is a risk, at least compared to other large-cap cryptocurrencies.

What coins make sense then?

Although Burniske and the team at Placeholder Capital have ruled out BSV as a crypto asset they want to invest in, they are springing for opportunities in other sectors of the industry.

Bitcoin, obviously, is something they’re investing big in, with Burniske previously saying that the leading cryptocurrency is likely to be some of the fastest assets to recover after the ongoing coronavirus crash.

The investor even added that BTC and assets like it, such as Decred, have “vast” potential upside:

“The potential upside of individual SoV-assets […] is vast, and because it’s hard to calculate mathematically, leaves much to the imagination. That can make these fan-favorites for large swathes of society.”

Burniske also identified Ethereum-based “capital assets,” such as Maker and 0x tokens, as assets Placeholder wants to invest in due to their potential to “surpass equities in how they globally provision services, govern stakeholders, and distribute value.”

Craig Wright, the self-proclaimed creator of Bitcoin and BSV pioneer, claims that the future of Bitcoin lies in big data centers as it was never envisioned as a payment system that works outside of the law.