From inception in 2017, the IoTeX team's objective has been to connect the real world to the blockchain in a trusted way. 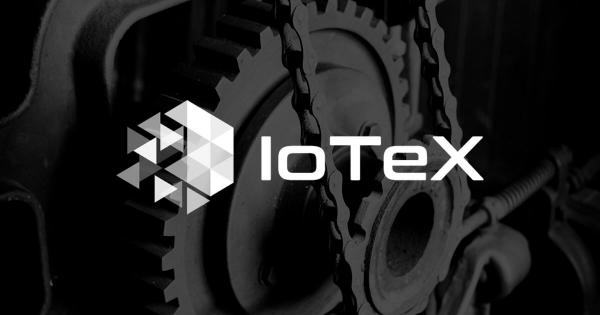 The world is headed toward a future where billions of intelligent machines will unlock a multi-trillion-dollar economy, IoTeX took its most significant leap after years of in-depth research and development to make its vision a reality.

“We’ve always believed that intelligent machines will one day be the largest users of blockchain,” said IoTeX Head of Ecosystem Larry Pang.

“We have entered a new era. With MachineFi, we’re taking our biggest leap yet to turn this vision into reality.”

With 100 billion machines coming by 2030, machines will soon become our world’s future workforce, and McKinsey estimates this workforce will generate up to $12.6 trillion in value.

“However, the question we should ask ourselves is who will own these machines and who will benefit from this multi-trillion dollar machine economy?” asked Art Malkov, Head of Growth.

“Using blockchain and Web3, the IoTeX team will ensure these billions of machines provide value control and opportunity to everyday people in businesses, not centralized corporations.”

The essence of MachineFi is to give back to people control over their data, and the data their smart devices generate when connected to the Internet.

“MachineFi is still a brand new concept,” said IoTeX CEO and Co-Founder Dr. Raullen Chai, a scientist and expert cryptographer who worked for Google, Uber, and Oracle before his current project. ” For the past year, we have been researching, designing, and building a brand new suite of innovations to power MachineFi.”

IoTeX has scheduled the unveiling of its brand new machine portal to register all types of intelligent devices onto its blockchain-powered Internet of trusted things (IoTT).

“In the coming months, a groundbreaking “real-world data oracle” that will for the first time provide blockchain Dapps with real-time data from IoTeX-registered machines rather than price feeds and historical data from APIs,” IoTeX Head of Operations and Co-Founder Jing Sun.

“The IoTeX proprietary oracle will have the capability of making telemetry data from machines available to smart contracts, enabling a new design space for developers to build new applications that incorporate everyday activities, Sun added.

In 2022, IoTeX has planned the release of the first Decentralized Identify (DID) framework for all machines registered to the IoTeX blockchain.

“This DID will become the standard across all IoT platforms and networks and allow machines to own the data and value they generate exclusively,” explained IoTeX Head of Growth Art Malkov.

“This DID will enable devices to communicate with each other, with humans and therefore businesses. By combining innovations in blockchain, identity, oracles, and hardware, IoTeX will make real-world data available to blockchain dApps for the first time.”

What the future holds

In Q3 and Q4 of Next year, the MachineFi Hub will also become a reality. And afterward, IoTeX will launch its cross-chain data bridge, through which all machine data will be able to be used across all EVM-compatible blockchains and therefore have optimal utility for users and developers alike.

MachineFi’s main objective is to transition traditional IoT and machine verticals into MachineFi decentralized applications (dApps) that will enable millions of users to participate in the machine economy with billions of smart devices.

The world has witnessed the boom of smart devices and automated machines, including smart home devices and vehicles. However, few have noticed inter-machine communication is significantly increasing.

According to a McKinsey report, the Internet of Things (IoT) could unlock a global economic value of up to $12.6 trillion by 2030. And Techjury estimates that over 125 billion devices will be connected to the Internet by the start of the next decade, powering that machine economy.

“MachineFi realizes the vision that people own their data and smart devices and not Big Tech or other centralized corporations. By participating in the machine economy, people can fully monetize their devices and associated digital assets on a global scale,” concluded Dr. Chai.