Bitcoin saw an explosive upside movement earlier today that caught the cryptocurrency’s bears off-guard, leading to over $75 million in positions to be liquidated. 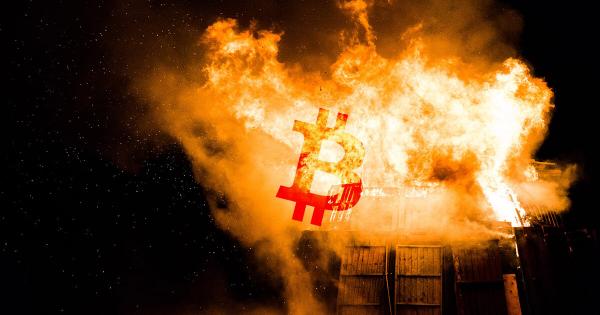 Bitcoin saw an explosive upside movement earlier today that caught the cryptocurrency’s bears off-guard, leading to over $75 million in positions to be liquidated.

Open interest (OI) on popular crypto trading platform BitMEX has also plunged in the time following this movement, with the freshly liquidated positions apparently leading many traders to move to the sidelines as they search for greater clarity.

This trail of destruction may have done some serious damage to sellers, potentially bolstering the cryptocurrency’s bulls as it approaches a moving average that could have serious implications for its mid-term trend.

Earlier today the benchmark cryptocurrency saw a sudden spike that sent it from the lower-$7,000 region to highs of $7,800. This movement was entirely unexpected, as many analysts had expected the resistance around $7,200 to be a difficult level to surmount.

The explosive rally marked a bullish resolution to the tight trading range that the crypto was caught within between $6,800 and $7,200 over the past few weeks.

Following the move up to these highs, Bitcoin has since settled down to its current price of $7,450, which still marks a notable climb from daily lows of roughly $7,000.

Two notable byproducts of this volatility are a rapid decline seen in Bitcoin’s OI as well as a massive spike in position liquidations, according to data from Skew.

BTC’s OI – which describes the cumulative dollar-value of positions held by traders – had been rising over the past several days, peaking at roughly $540 million earlier today before cratering to just over $420 million after this movement occurred.

This over $120 million decline is slightly larger than the $75 million in positions that were liquidated during the movement, suggesting that a significant number of traders closed positions and moved to the sidelines following this volatility.

Another result of this recent movement was that it allowed Bitcoin to tap its 20-week moving average – a level that has a tendency of sparking mid-term uptrends when surmounted and capitulatory declines when broken below.

One popular analyst named pointed to this line in a chart offered in a recent tweet, concisely noting that BTC just tapped this level.

Because the crypto is currently stuck beneath this moving average, whether or not it is able to surmount this in the coming few hours and days could offer significant insight into its mid-term trend.

Even after 50% crash, Bitcoin is primed to see explosive growth: 5 reasons why

Bitcoin’s performance over the past few weeks since the mid-March bottom has undoubtedly been impressive.

Bitcoin has been on a remarkable run over the past decade, despite the recent downturn.

Bitcoin whale growth is macro bullish, but will it be enough to stop another massive selloff?

Data suggests that large buyers – sometimes referred to as “smart money” – have been in full Bitcoin accumulation mode over the past couple of months, with the number of proverbial “whales” hitting multi-year highs just in the past week.