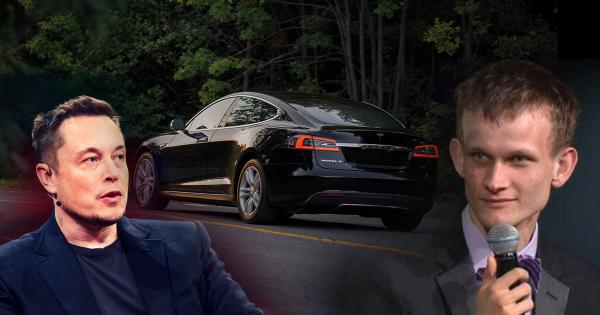 Almost immediately after the release of Musk’s tweet, the interest in Ethereum on major search engines including Google spiked, most likely as it drew interest from the mainstream.

Although the tweet itself had minimal impact on the overall trend of Ethereum on Google Trends throughout the past 12 months given the large demand for Ethereum in early 2018 when ETH was priced at over $800, it showed that the broader market remains unaware of Ethereum and the rest of the cryptocurrency market.

To Buterin, Musk asked about the type of applications and platforms that can be built on Ethereum that would maximize the potential of blockchain technology.

What should be developed on Ethereum?

Buterin stated that on the Ethereum blockchain protocol, a globally accessible financial system, an easily verifiable registry of data, micropayment channels, and new governance models can be built among many other applications, sharing a wide range of applications that could benefit from the decentralized structure of the blockchain.

The Ethereum co-creator also shared other potential use cases of Ethereum and blockchain protocols in general, such as micropayment systems to reward publishers, a reputation system for individuals with limited resources, and decentralized DNS alternatives.

A General Increase in Crypto Interest

In recent months, some of the biggest companies in the global market in the likes of JPMorgan, Facebook, Kakao, and Samsung either have already developed crypto assets or are reportedly designing blockchain projects of some sort.

CoindeskKorea, a publication operated by a mainstream media outlet in South Korea called Hankyoreh, reported that Samsung is in the process of developing a mainnet for Samsung Coin and the company has already run various tests internally.

“Currently, we are thinking of private blockchain, though it is not yet confirmed. It could also be public blockchain in the future, but I think it will be hybrid – that is, a combination of public and private blockchains. The market expects Samsung Coin to come out, but the direction has not yet been decided.”

Most newly emerging blockchain projects and crypto assets are expected to launch on major protocols as a start, like Ethereum, due to the simplicity of the ERC20 token standard.

But, it remains uncertain whether cryptocurrencies at the current stage of development can handle the large transaction capacity major corporations would require.

The Musk tweet raised a debate amongst cryptocurrency developers and researchers on the efficiency of second-layer solutions of Bitcoin, Ethereum, and other blockchain networks at their current form and whether they can realistically handle a platform that requires many transactions per second.

For instance, if Tesla is to incentivize drivers with a crypto asset or enable a digital asset as the native currency of an internal system, it is unclear if existing cryptocurrency systems would be able to support it.