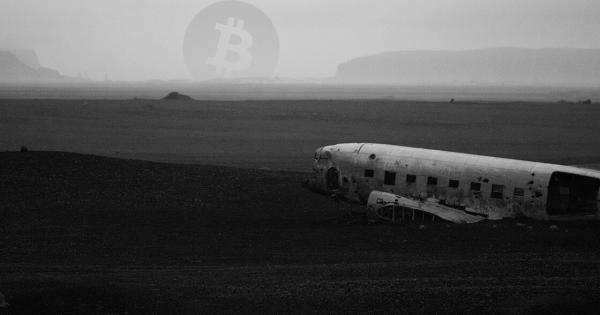 Bitcoin experienced its worst plunge since January 2018, dropping as much as 18 percent on Sept. 24. The drop came shortly after the U.S. stock market experienced a similar crash, which led many to question whether Bitcoin was truly a “safe haven” asset.

No bull market for Bitcoin

Bitcoin’s upcoming bear market has been one of the most heavily discussed topics in the crypto industry, with experts and analysts alike claiming the world’s largest cryptocurrency could only go up in 2019.

The much-anticipated launch of Bakkt‘s physically settled Bitcoin futures and rumors of Bitcoin ETFs all pointed out to an inevitable influx of institutional money into the crypto market.

As soon as Bitcoin dropped below the $8,000 resistance, theories on why such a sharp drop happened began popping up. Many seemed to believe that the drop in Bitcoin’s hash rate on Sept. 24 caused the price crash.

According to data from Blockchain.com, the network’s hashrate dropped from 98 M TH/s to 67 M TH/s in a matter of seconds. And while the hashrate, which measures the speed at which operations in Bitcoin are completed, managed to recover within the hour, some traders could have seen this as a sign of declining network health and decided to bail out.

Many fingers were pointed at Bakkt and its highly-anticipated Bitcoin futures. The physically settled futures were expected to be a major market mover, which is why their underwhelming launch could have deterred investors from Bitcoin.

Mati Greenspan, the senior market analyst at crypto trading platform eToro, said Bakkt was a prime example of “buy the rumor, sell the news,” a trading strategy that takes advantage of stock price moves in anticipation of rumors and their subsequent drop after the actual news is released.

However, Greenspan offered another interesting take on Bitcoin’s latest price drop, sharing a graph showing there might be a correlation between Bitcoin and the stock market.

In a tweet, Greenspan said that the plunge the U.S. stock market experienced on Sept. 24 preceded the Bitcoin price crash.

“I know it’s an uncorrelated asset but this is a really strange coincidence,” Greenspan wrote. 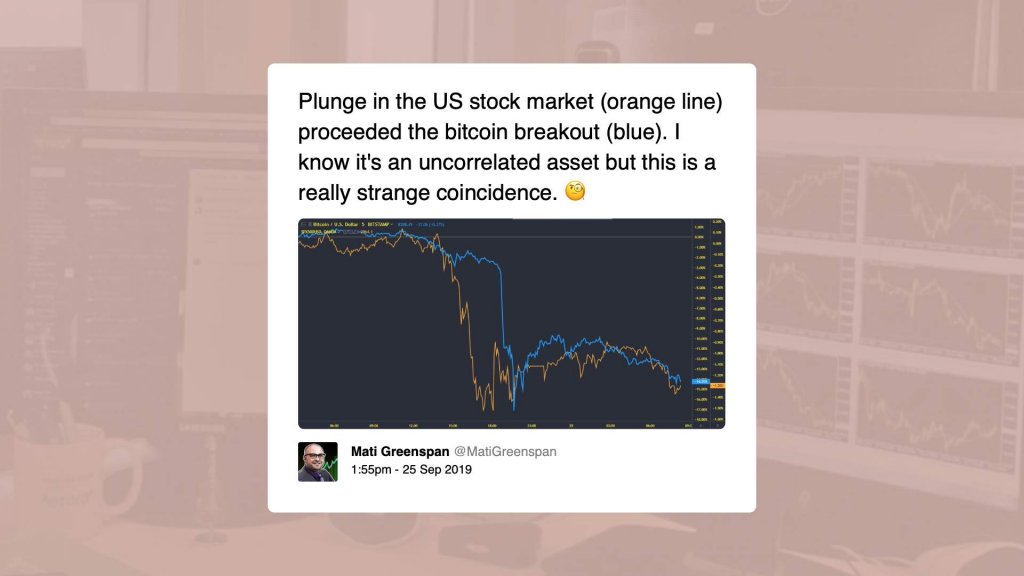 While most Twitter users seemed to agree that the matter should be looked into further, the majority seemed to believe that this was nothing more than a coincidence.

Users on Reddit pointed out that the chart focused on a very short time frame, which showed correlation. However, zooming out and looking at the bigger picture shows this was most likely a coincidence, as Bitcoin lost 14 percent of its value, while the stock market experienced just a 1 percent drop.

Given how weak the connection between the two price drops is, it managed to raise quite a few eyebrows in the crypto community. However, if both the stock market and Bitcoin head towards a rebound at the same time, stronger links between the two might be revealed.

In the last three hours, the BTC price dropped 15 percent breaking out to the downside of a technical pattern that predicts a further decline to $6,500.