Just like that, positive sentiment returns following a strong performance over the weekend. 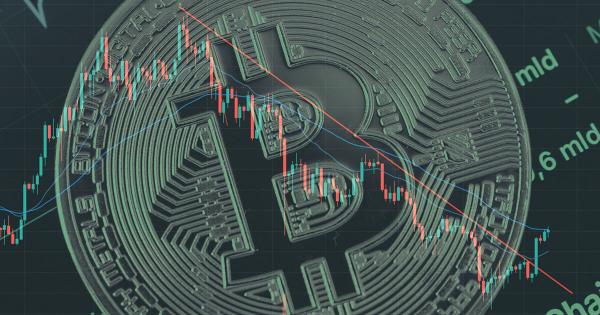 An 11% swing to the upside on Friday closed the day at $41,600. Although Saturday saw a tapering of activity, closing 0.6% down, Sunday and Monday saw a continuation of bullish form.

Crypto YouTuber Lark Davis noted the weekend’s price action had broken the downtrend that has been in force since mid-November 2021. His tweet on the matter posed whether this event is the start of a significant rally.

#bitcoin has been in a downtrend since November, we have now broken out of that trend.

Against a backdrop of looming tougher regulation and fears of a rate rise sapping liquidity, crypto markets have had a jittery start to 2022. From peak to trough YTD, Bitcoin has suffered a 30% loss in value.

The turning point came on January 23, as $BTC began grinding higher. However, small candle bodies suggested a distinct lack of conviction on the part of bulls.

On that event, sentiment per the Fear & Greed Index moved from a rating of 20, classed as extreme fear, to 45 today, not far from neutral territory.

The question is, is this the start of a major trend reversal?

According to Davis‘ analysis of the Relative Strength Index (RSI), the signs are looking positive. He noted a break in the RSI downtrend, with momentum rocketing much higher over the weekend.

Davis points out the last time this happened, around mid-July 2021, a 130% price rally followed, including new all-time highs.

“Are we going to see a 130% price rally now? That would be awesome, who knows? But what is evident is that we have definitely broke out of this downtrend and that when we’ve had these RSI downtrends been broken out of previously, they have come right before a major price rally.”

What’s next for Bitcoin?

Although the technicals show support for a reversal, what about on the fundamental side?

Recently, following El Salvador’s steps, there is talk of another sovereign nation also legislating for Bitcoin as legal tender.

While there’s no further news on that front, rumors suggest it will be another Latin American country next. Panama, Paraguay, and Guatemala are names being bandied about, while Argentina cannot be discounted either.

However, out of leftfield, there is increasing chatter about a state, in the United States, breaking convention also to pass Bitcoin as legal tender.

Host of the Smart People Sh*t podcast, Dennis Porter, told his 60,000 Twitter followers that Bitcoin will hit $100,000 once a state announces $BTC as legal tender. Porter then says more states will follow, by which time the third is announced Bitcoin will be at $1,000,000.

Lark Davis is a Bitcoin and cryptocurrency investor, who makes daily videos on his YouTube channel to help the average investor make money in this fast-moving market. Learn More