Bitcoin sees a 10% drawdown, what’s behind this market sell-off?

An uncertain macro economic landscape and trouble in Kazakhstan are being blamed for the market downturn. 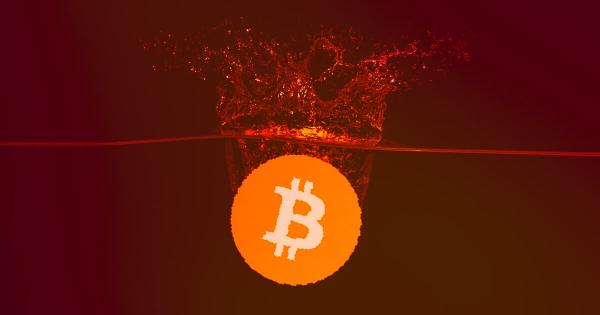 The first week of 2022 gets off to an inauspicious start as Bitcoin suffered a 10% swing to the downside on Wednesday. Bears sunk the price as low as $42,500 before closing the daily candle marginally higher, at $43,200.

With that, the Fear and Greed Index moved deeper into extreme fear, hitting a 24 week low of 15.

A value below 25 represents a sentiment of extreme fear. And while the market has been flitting in and around this zone since late Q4 2021, heightened macro uncertainty is a more critical factor this time around.

Bitcoin and stocks are feeling the pinch

The discovery of a new covid variant, named IHU, in France and the Fed announcing aggressive intent to tackle inflation dealt a blow for crypto and stocks.

“the Federal Reserve to raise interest rates sooner than expected and begin reducing its overall asset holdings as a second brake on the economy.”

U.S tech stocks were hit hardest, as the Nasdaq slumped 3.3% (a 530 point loss), marking its worst performance since February 2021.

Crypto, which is widely regarded as a speculative technology, was also hit hard. Wednesday opened with a total market cap of $2.204 trillion. As the day’s events unfolded, sellers tanked the market cap as low as $2.043 trillion – a 7% drop in total value.

The biggest losers over the last 24-hours were Internet Computer, Loopring, and Axie Infinity, all with losses of around -18%. More than half of the top 100 were in double digital losses.

Aside from stablecoins, only Tron-backed APENFT managed to buck the trend, posting a 5% gain in the last 24-hours.

While the World Health Organization played down the threat of IHU, markets are likely concerned with the potential for further lockdowns to combat the new strain.

Analysts are also blaming events in Kazakhstan for the downturn in Bitcoin and crypto markets.

The doubling in the cost of liquid petroleum gas has sparked civil unrest in the country. This has triggered clashes between anti-government protestors and security forces, leading to dozens killed and hundreds injured.

As well as imposing a curfew and banning mass gatherings, the government has also brought in a nationwide internet blackout.

“President Kassym-Jomart Tokayev imposed a nationwide state of emergency that includes a curfew and a ban on mass gatherings.”

Following the country’s internet blackout, the Bitcoin hashrate dropped by 12%.

Along with Kazakhstan’s unreliable electricity grid, these events provoke debate on the country’s suitability as a major mining hub.