The world’s largest crypto asset saw a surge in prices this morning. 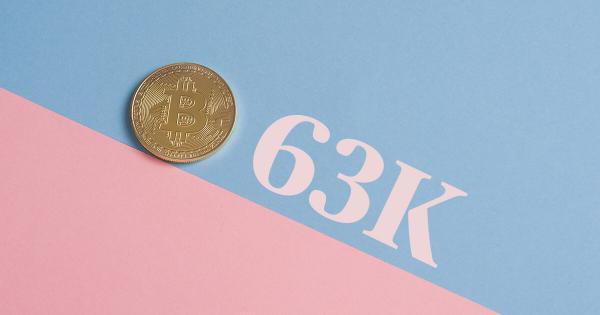 The network is now worth over $1.1 trillion, with 18.6 million BTC now in circulation. It traded at $60,000 yesterday but convincingly broke through the $63,000 mark on the back of the Coinbase public listing and other strong fundamental news.

As the below image shows, Bitcoin trades above its 34-period moving average, a tool used by traders to determine an asset’s trend, and remains in a strong “uptrend.” There’s currently no visual or technical “resistance” level where sellers could step in to take profits—meaning the runway for Bitcoin to run even further is clear.

Funding rates remain steady and “tolerable” for Bitcoin, suggesting the rally was a ‘spot’-driven one. High rates usually mean margin traders have borrowed massive amounts of capital to place bigger bets on the price movements of BTC—which can temporarily cause a price surge.

#Bitcoin hit ATH and the funding is tolerable.

Analysts and crypto industry executives commented on the fundamentals that are contributing to Bitcoin’s price rise.

“The asset has had plenty of massive developments recently, such as Bloomberg predicting a $400,000 price by 2022. Another reason for this may have something to do with US exchange giant, Coinbase, finally getting a direct stock listing,” said Alexander Vasiliev, co-founder and CCO of the global payment network Mercuryo.

He further stated that the rising adoption of BTC in countries like Turkey served as a strong fundamental aspect as well:

“The fact that BTC has gone big in Turkey as the country’s economic turmoil continues also shouldn’t be ignored. And, with BTC mining constantly being criticized for energy use, the plan to make it go green also could have contributed to the coin’s price surge.”

Nick Spanos, the co-founder of Zap.org, told CryptoSlate that the price run was fueled by two core fundamental events: The public listing of American crypto exchange Coinbase cryptocurrency exchange and the growing list of firms pressing on the US Securities and Exchange Commission for an ETF product.

The listing of Coinbase, said Spanos, is particularly exciting to both the mainstream market investors as well as crypto market enthusiasts.

“While the former will have a more direct opportunity to buy the shares of a company that plays a central role in Bitcoin and cryptospace, the latter are excited as Coinbase will open the gates for more conservative investors to embrace the coin, and perhaps other digital assets,” he noted.