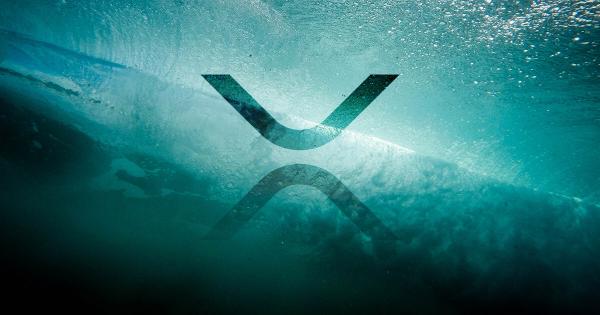 Daily XRP transactions are skyrocketing as Ripple prepares to host its annual conference, Swell. The hype around the event has not been able to push the price of this cryptocurrency higher, but there are several fundamental reasons to be bullish about XRP moving forward.

Swell is an invite-only annual conference, hosted by Ripple, that aims to bring together some of the most prominent advocates in the financial sector to discuss the trending topics in the industry.

This year, the event is set to take place next week in Singapore. And, three different keynote speakers are scheduled to take the stage, including CEO at BKash Kamal Quadir, Singapore Foreign Ministry Ambassador Chan Heng Chee, and former governor at the Reserve Bank of India Dr. Raghuram Rajan.

As the most anticipated conference of the year for the XRP community approaches, the network activity is rising.

The number of day-to-day XRP transactions has been on a roll. It recently hit over 1.65 million transactions outperforming all the other cryptocurrencies in the market. XRP transactions accounted for more than half of all crypto transactions on Oct. 26, according to @XRPcryptowolf. The last time XRP’s daily transactions were this high was during the “parabolic bull run” between Dec. 2017 and Jan. 2018, added the Bitrue ambassador. 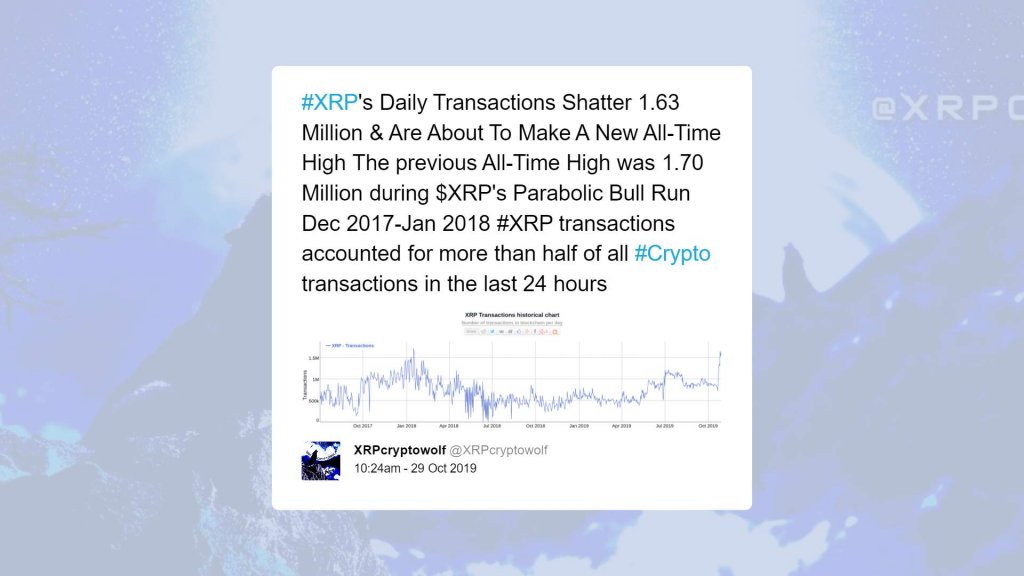 As XRP transactions were skyrocketing on Saturday, Ethereum was transacted 717,000 times while Bitcoin 305,000. Despite the high number of daily transactions, XRP has not been able to move higher than $0.30.

After rising more than 12 percent to reach a high of $0.315 on Oct. 26,  XRP moved back into the no-trade zone between $0.24 and $0.30. This trading range is containing the price of this cryptocurrency since mid-August without a precise movement that determines the direction of its trend.

A spike in volume may allow XRP to break outside of the current trading range where it sits. If this happens, this cryptocurrency could try to hit the next levels of resistance that sit around $0.38, $0.47 and $0.57. This coincides with the idea that Peter Brandt recently presented about XRP forming a bottom.

Under this timeframe, the 50 and 100-twelve-hour moving average could be used to determine whether XRP is bound for a steep decline. Thus, if this cryptocurrency breaks below the 50-twelve-hour MA, it will likely test the next level of support given by the 100-twelve-hour MA. But, if the latter fails to hold the price of XRP, then it will pull back to the $0.24 support level.

The lack of buying pressure behind XRP could be related to a new complaint filed against Ripple on Aug. 5, 2019. The filing argues that the firm’s tokens are unregistered securities under the U.S. Security and Exchange Commission’s framework, and it is the latest update to a lawsuit that was filed over a year ago.

Additionally, the complaint claims that the payment processor company broke a number of laws in the state of California by reportedly “blurring differences between Ripple’s enterprise solutions and XRP to drive demand further,” and “paying exchanges to list XRP, limiting the supply of XRP to drive demand.”

Although Ripple CEO Brad Garlinghouse has limited himself to comment on the lawsuit, he maintains that XRP is not a security. According to Garlinghouse, the SEC’s guidance is not issued by the regulatory agency itself, and as a result, cannot be considered “law, rule, or regulation.”

The lack of regulatory clarity in the U.S. has even pushed Ripple to send an open letter to Congress in late July, where they asked not to be “painted with a broad brush.” And, Brad Garlinghouse recently admitted to spending about 25 percent of his time engaging in discussions with global regulators.

Garlinghouse in a podcast with Fintech Beat’s Chris Brummer said:

“I spend that time explaining to them that this isn’t about Silk Road, and every transaction that goes through Ripple’s technology is KYC. Know your customer is checked for as well as AML.”

Despite Garlinghouse’s efforts, the firm’s regulatory uncertainty remains a concern for many investors. Even the director of the Blockchain Association Kristin Smith said she was worried about the lack of clarity that crypto startup face in the US.

“I’m very worried, and I don’t think that is an irrational or paranoid viewpoint to take. Companies, even within members of the Blockchain Association, are moving their operations overseas… because there are strong consumer protections in place and certainty in those regulatory frameworks.”

Even though the regulatory uncertainty around XRP persists since the SEC has yet to release an official statement, Ripple continues expanding. The recent strategic partnership with MoneyGram is starting to show its success as the liquidity of XRP in Mexico, specifically on Bitso, has increased significantly.

The firm also teamed up with Finastra, a London-based financial technology company, to offer its payment solutions and fast cross-border payments. Now, it remains to be seen the announcements that will be made during Ripple’s Swell that could push its price higher as it did during past conferences.

According to an analyst based in Japan, the liquidity of XRP in Mexico, specifically on Bitso, has increased significantly following the partnership between MoneyGram and Ripple. 2 min read

The CEO of Ripple, Brad Garlinghouse, took to Twitter to address the crypto community about the collection of concerns that have been raised about XRP over the last few months. 4 min read

Xpring, an initiative by Ripple, is launching a platform to provide tools, services and programs for developers to easily build applications with payment gateways using fiat and crypto, particularly XRP. 2 min read