What Is ‘Currency Independence’ and Why is it Important? Jonathan Kim · 4 years ago · 2 min read
News › Adoption

What Is ‘Currency Independence’ and Why is it Important?

The emerging blockchain era promises to give “control of value” back to the people. 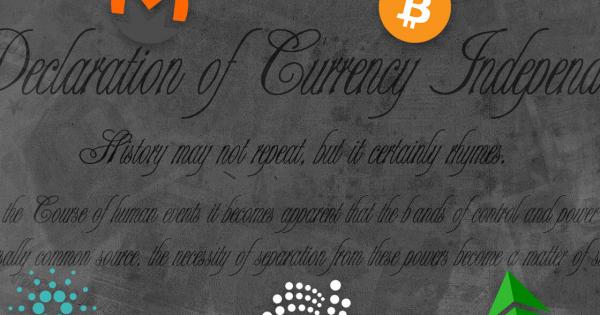 The emerging blockchain era promises to give “control of value” back to the people. Security pioneer, crypto evangelist and 2020 U.S. presidential candidate, John McAfee, is pushing for the bold separation of state and value control to achieve “Currency Independence.”

The Declaration of Currency Independence

Akin to the separation of church and state outlined in the U.S Constitution, the McAfee team believes that currency and the value it derives should be controlled and supplied by the people, rather than centralized in a government system susceptible to manipulation and obfuscation.

The Declaration of Currency Independence announces cryptocurrency as a newfound solution to the cumbersome and corrupt current allocation of value control.

Outlined in the “Declaration of Currency Independence” (available in 16 of the most prominent world languages), it states:

“Prior to the proliferation of cryptoassets, the option of the State abdicating control over the supply of currency was never a viable possibility due to threat of forgery, and the costs to secure the integrity of the currencies… The maintenance of this integrity is a noble cause and necessary to the stability of a state, because it ensured the exchange of value could be trusted. However, the maintenance of that integrity can, has, and is fundamentally manipulated.”

Drafted by the McAfee team, the “Declaration of Currency Independence” calls upon the community of cryptocurrency supporters and proclaims the proliferation of blockchain technology as an inevitable force for change – eliminating systemic risks in government and democratizing value transfer.

The final remarks of the “Declaration of Currency Independence” state:

“We, the undersigned, will dedicate our lives building networks and systems that restore the Integrity of Value and directly challenge the authority of those who seek to destroy Value.”

Who is Behind the Declaration of Currency Independence?

The group responsible for the Declaration of Currency Independence, the McAfee Crypto Team, offers support and advisory for all stages of blockchain projects through promotional efforts and partnerships.

As nearly 90% of McAfee’s 826,000 Twitter followers are active cryptocurrency traders, the security pioneer draws immense attention in the crypto community.

The Declaration of Currency Independence is a meaningful step in raising the awareness of blockchain and the benefits of cryptocurrency as a tool to democratize value transfer.