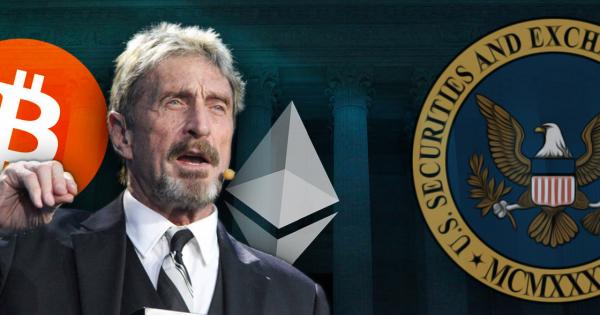 McAfee, who recently announced his intent to capture the White House in 2020, called out Clayton via Twitter earlier this week, coordinating the swarm tactics of newly-enlisted McAfee “meme war” army members to flood the SEC Chairman with requests that he debate the nature of cryptocurrencies on CNN. 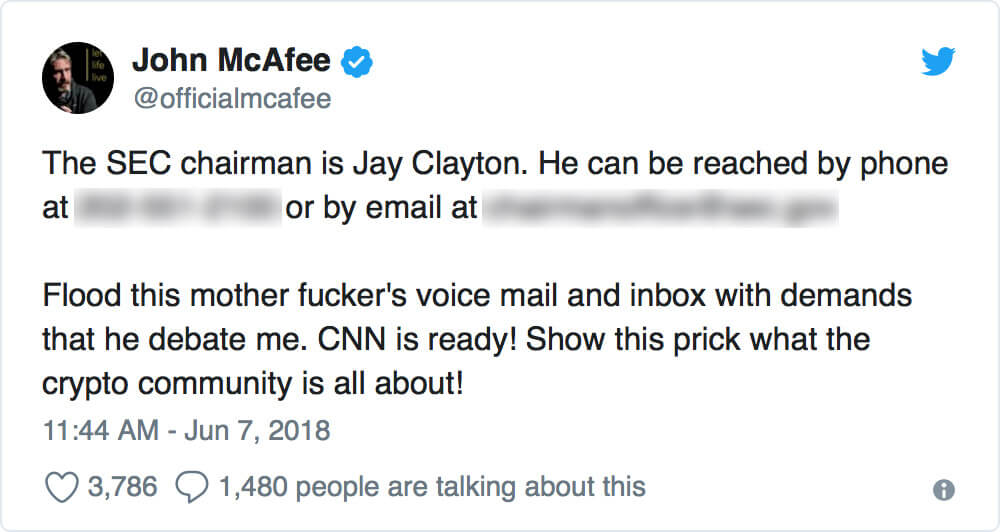 The SEC Chairman’s recent classification of all initial coin offerings as securities triggered a strong reaction from McAfee, with Clayton’s statements catalyzing an immediate response from the security expert on Twitter:

The head of the SEC declared today that all ICOs are securities. While I STRONGLY disagree, and believe that the majority of ICOs do not meet the Suprene Court Howey Test for securities, I will submit, for now, to their rules and will not work with future ICOs.. But, I'll be back

The SEC’s official perspective on cryptocurrencies appears to be shifting toward a position that could possibly result in the implementation of strict regulatory measures, a move that would diametrically oppose McAfee’s stance on crypto as illustrated in the McAfee Team Declaration of Currency Independence:

“The time has come for Money to be separated from State, and for the first time, the tools are available.”

McAfee addressed the SEC directly, challenging the regulatory body to a debate on national television similar to the debate between McAfee and former FBI officer Steve Rogers in 2016, which centered on data privacy:

What Would a McAfee/SEC Debate Achieve?

The impact of a  debate between McAfee and the SEC could be prominent — the FBI dropped demands of an iPhone backdoor in 2016 as a direct result of McAfee’s last governmental clash.

The US SEC has been demanding increasing levels of oversight and control over cryptocurrencies and crypto exchanges since late 2017.

While the decentralization of cryptocurrencies and blockchain in general is, by nature, impervious to the slow-moving legislative fumbling of big government, the establishment of anti-crypto regulations could stifle innovation and interest in technology that the International Money Fund believes could initiate a “large-scale shift” away from government-issued fiat currency.

A debate between McAfee would not only challenge the core precept presented by recent SEC statements but highlight the importance of the ongoing cryptocurrency regulation debate and introduce a number of important questions into the public zeitgeist — namely, do we need government involved in the issuance and control of currency at all?

In an exclusive quote to CryptoSlate, McAfee stated:

“The SEC has twisted Law to its own purpose. If they are not stopped, if no legal challenge is initiated, then the entire free crypto market and our fundamental right to create or choose currencies as we wish, will be destroyed.”

Regardless of the outcome of a debate between the SEC and McAfee, we’ll likely see much more of McAfee and his outspoken views on the implementation of blockchain technology — McAfee will again run for the office of President of the United States in 2020, possibly creating his own party:

In spite of past refusals, I have decided to again run for POTUS in 2020. If asked again by the Libertarian party, I will run with them. If not, I will create my own party. I believe this will best serve the crypto community by providing the ultimate campaign platform for us.