For the third or fourth day in a row, bulls have taken control of the cryptocurrency market. Save for Tether’s USDT, Cosmos, and a few other outliers, the top digital assets posted strong gains, pushing the market capitalization of the crypto market back above $200 million for the first time in weeks.

Bitcoin itself posted 6 percent gains, surging as high as $8,000 on Jan. 6, but it wasn’t BTC that was setting the pace, it was seemingly XRP and Stellar Lumens (XLM).

In the past 24 hours, XLM rallied by 8 percent, with the price of the popular altcoin reaching as high as $0.0495 as buyers have stepped in en-masse. This surge has been aided by relatively high volumes, with CoinMarketCap reporting that pairs related to the cryptocurrency have seen $255 million worth of trades in the past 24 hours, corroborating the idea that this surge is valid.

It isn’t clear what pushed XLM higher on Jan 6, though there are a few theories floating around.

The foremost of these being that XRP’s surge led to similar gains in the price of XLM.

Earlier Jan. 6, CryptoSlate reported that XRP saw quite the surge as Bitcoin pressed higher, rallying by 12 percent to the current price of $0.22 from multi-year lows around $0.18 established just a week or two weeks earlier.

XLM effectively underwent the exact same bout of price action, strongly rallying higher off multi-year lows in the wake of XRP, described as a “cousin” of XLM.

Add to that the fact that both XRP and XLM have been some of the worst-performing cryptocurrencies over the past few years, implying that they should see stronger relief bounces than other altcoins, and this theory makes even more sense.

What can push XLM higher?

While XLM has already seen an impressive performance over the past few days, there may be a confluence of fundamental factors that will push the cryptocurrency higher and higher.

Firstly, in December, the Stellar Development Foundation and Keybase, a crypto-friendly group messaging community and file transfer hub, revealed that it would no longer continue the giveaway of 2 billion XLM—valued at just shy of $100 million as of the time of writing this.

Yes, the fact that Keybase ended its airdrop may seem like a bearish sign—the giveaway’s premise was to spread the adoption of the cryptocurrency—though, in reality, it may benefit XLM holders.

Although there haven’t been any concrete analyses done, cryptocurrency information firm Messari found that the altcoins with the highest inflation rates (Zcash, XRP, and XLM) were performing the worst. With giveaways contributing to cryptocurrency inflation rates, the premature conclusion of the Keybase airdrop may actually result in less selling pressure on the XLM market.

And secondly, the Foundation near the end of 2019 burned 55 billion of the tokens, sending coins, a majority of which were slated to be released into the open market in the coming years, to “a Stellar account with no signers.” Similarly to the previous event, this means that fewer coins will hit the market, aiding a bull case for XLM.

Altcoins gaining strength as a class

Even if the abovementioned fundamental events don’t do anything to aid Stellar Lumens, altcoins as an entire asset class have purportedly room to rally, meaning that everything from Ethereum and Litecoin to XRP and XLM could have legs to move higher from here.

Below is a chart from prominent cryptocurrency trader “Dave the Wave”— an analyst who called Bitcoin’s decline to the $6,000s when BTC was trading above $10,000. It the chart, the pseudonymous trader is depicting that the aggregate market capitalization of all altcoins has bounced off a key logarithmic support, and is thus poised to rally higher into 2020 and beyond.

Not to mention, the Relative Strength Index of this metric has formed a double bottom just as it did in a previous market cycle, implying a strong breakout to the upside in the coming months. 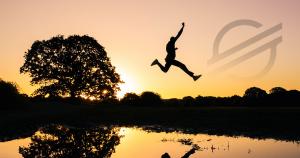