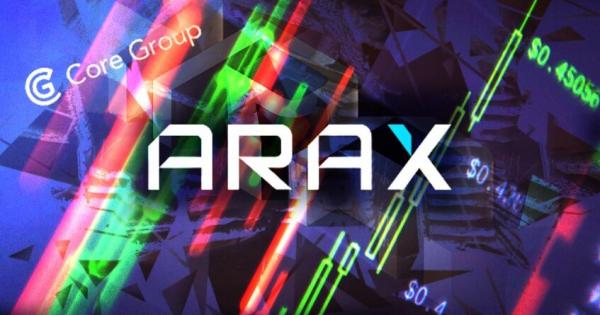 CryptoSlate recently interviewed the CEO of Core, Ockhert Loubser, for an episode of the SlateCast in which he divulged the expansive plan for the Core ecosystem. While the Core Blockchain is not a part of the deal, in part due to its decentralized nature, several of its dApps and DeFi projects are.

The acquisition includes the intellectual property associated with the following projects:

As custodian of the intellectual property and software, arTax Consult s.r.o. currently manages the assets for their owners.

Additionally, ARAX and the current owners tasked arTax with structuring, documenting, and securing the assets in Core Business Holdings in four different organizations to match the projects above.

The investing firm cited several reasons for the recent acquisition of Core Business holdings. The Core Business Holdings software solutions employ the Core Blockchain Network, which according to the statement, is the world’s fastest, most scalable, and most secure fully decentralized platform built on an environment-friendly proof-of-work blockchain. Michael Loubser, CEO of ARAX commented,

“The acquisition of Core Business Holdings will be a total game changer for ARAX. It will put the company at the forefront of digital assets, tokenization, immediate settlements of data and transactions with a specific focus on asset management, and so much more with the cutting-edge technology built on the Core Blockchain, the next generation in fully decentralized networks.”

Aside from acquiring the majority stake, ARAX confirmed it would attempt to acquire Core’s minority stakes as well.