Yield farming protocol tanks and takes YFI, COMP, LEND down with it

The price of Bitcoin dived $400 below the BTC spot price on BitMEX’s Bitcoin perpetual swap contract as the platform reportedly halted trading on account of “system instability.”

Traders widely reported experiencing a system crash on BitMEX between 02:16 and 03:00 UTC Friday morning, as XBTUSD crashed to $3,600, $400 below the Bitcoin spot price. 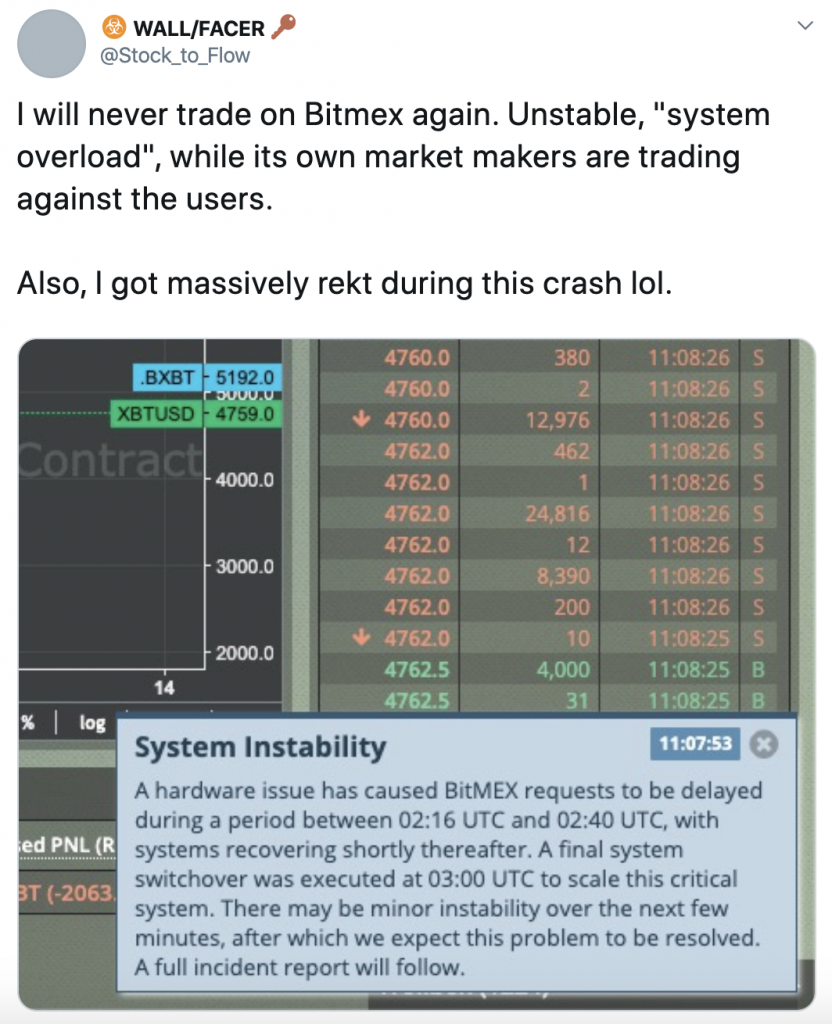 The huge divergence came following a ferocious market-wide sell-off that saw Bitcoin shed nearly 40 percent against the dollar, and the BitMEX funding rate crater to its lowest level in years.

At 5am UTC, BitMEX released a statement on Twitter describing the outage as a “hardware issue” causing “requests to be delayed.”

Between 02:16 and 02:40 UTC 3 March 2020 we became aware of a hardware issue with our cloud service provider causing BitMEX requests to be delayed. Normal service resumed at 03:00 UTC. As a reminder, latest system updates can be found on our status page https://t.co/fVa1FAqSEW

A bad day to be on BitMEX

The sudden drop in funding comes after one of the largest bloodbaths ever seen on the Seychelles-based derivatives exchange, with Thursday seeing nearly $1.4 billion worth of long contracts get liquidated, and the BitMEX insurance fund losing 1627 BTC, its biggest intraday drop in two years.  After Friday’s early-morning flash-crash, the fund will thinkably post a larger loss (data is yet to be released for Friday).

“The crypto markets are affected right now because BTC has been trading like its positively correlated with the equities market. If you compare the traditional markets to the BTC market cap of $140 billion it is difficult to consider Bitcoin as a safe haven at this time”

Ross Middleton, CFO at decentralized exchange DeversiFi spoke to CryptoSlate about the reasons for the drop, stating:

There is a general ‘risk-off’ approach to all risk assets, including crypto. Bitcoin will show its safe-haven credentials over a longer time horizon once this move has bottomed out, or at least prove uncorrelated to other asset classes.”

Bitcoin and the aggregated cryptocurrency market attempted to rebound this evening following an intense bout of selling pressure seen earlier today, which came about in tandem with the decline seen by the United States stock market.

It has been a turbulent week for Bitcoin.