Wei Zhou, CFO of Binance: “We want the institutions to come in” [INTERVIEW] Jonnie Emsley · 3 years ago · 3 min read
This article is more than 2 years old...
News › Binance › Interview

A year after becoming top brass at the world’s largest cryptocurrency exchange by trading volume, Binance CFO Wei Zhou says his firm wants to “grow the pie bigger” and opening up an exchange in the United States just might be the best way to do it. 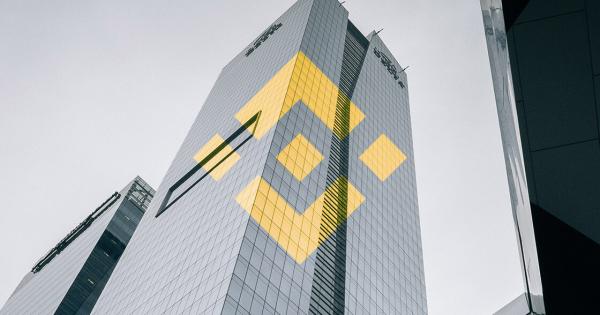 A year after becoming top brass at the world’s largest cryptocurrency exchange by trading volume, Binance CFO Wei Zhou says his firm wants to “grow the pie bigger” and opening up an exchange in the U.S. just might be the best way to do it.

“I think the underlying theme here is that 99.99% of the world’s money is still in fiat, and the biggest currency within fiat is the U.S. Dollar,” Zhou told CryptoSlate. “So as we look at the crypto world today, the user base is still very much a subset of a larger world. So it’s really important for us to be able to grow our fiat presence.”

Zhou’s core responsibility at Binance has been to bolster the firm’s offerings in the fiat-to-crypto market, and it would certainly look like he’s been fulfilling his duties. The Malta-based exchange has launched a spate of fiat-to-crypto platforms since Zhou’s September 2018 appointment, namely in Uganda, Singapore, and Jersey—which alone services 57 countries including Canada, the U.K., and most of continental Europe and South America.

It’s all about the Benjamins

But according to Zhou, who previously helped lead internet companies to IPO on Wall Street’s top stock exchanges as CFO, the one currency that really matters is the U.S. Dollar.

This detail, he said, explained CZ’s U-turn on deciding to launch an exchange in the U.S. Binance CEO Changpeng Zhao stated as recently as a year ago that he had little interest in working with U.S. regulators to set up an outpost in their jurisdiction.

Zhou lauded BUSD, the exchange’s newly launched, regulated USD stablecoin, as a step towards improving the accessibility of crypto in the U.S. Ultimately, he said it would be Binance and “the brand itself” that would “help to grow the market” there with its soon-to-launch fiat-to-crypto exchange, Binance.US (which Zhou added is on track for its launch in the “coming weeks,” as per the company’s official line).

“[BUSD is] a big step in terms of enabling fiat-USD as an on-and-off-ramp within the Binance ecosystem, and at the same time it’s really important to expand—physically—the exchange business itself into the United States.”

Binance wants to be at the center of crypto

Binance’s announcement of a U.S. chapter may have been received as nothing more than an attempt by the firm to head off Coinbase and consolidate power in the world’s biggest economy, but Zhou feels more philosophical about what the exchange is trying to do.

The “fundamental thesis” that drives these types of expansion efforts, Zhou explained, is that Bitcoin started its “life cycle” because people had trust in financial institutions—in fact, institutions in general. In such an era of mistrust, Binance would exist to “encourage people in general to take back control of their own money.” Naturally, Binance wants to be an integral part of this process. Zhou stated:

“We want to enable more crypto ownership, and we want Binance to be [new users’] entry point into crypto. Secondly, we want them to trade, or exchange, their crypto with any one of Binance’s services. And the third one is actually a key element of it, we want to see higher ownership of BNB, and we want to see more use cases for BNB around the world.”

Breaking through the “institutional malaise”

While Binance arguably went for the ‘grow first, regulate later’ approach evidently beloved by retail traders globally, it seems the business has reached the stage where jurisdictional compliance is not so much as an existential threat as it is a competitive barrier to entry.

Indeed, Binance is at its core a “retail-driven organization,” in Zhou’s words, but if the name of the game is to “grow the pie” that is the cryptocurrency market, then the exchange needs to set its sights on the institutions, who he says “for historical purposes, control all the wealth in the world.”

“If you ask me if we want to attract more trading on Binance, then ‘yes’ and if that trading is done by ‘institutions,’ then we’re going to be targeting these customers, these users, because they do have all pretty much all the liquidity and wealth in the world.”

Institutions may be proving a tougher sell than the retail crowd, however.

Zhou said his firm had struggled with “institutional malaise” on at least one occasion, when after a “six-month dance” with one of the big banks on Jersey Island, Binance was rejected by the unnamed firm’s risk committee—this, despite the exchange having “proper KYC, proper AML, everything that there is.” The end result was that Binance wound up being unable to secure a local bank account for its fiat-to-crypto exchange there.

Zhou—left with a bitter taste in his mouth after the Jersey Island affair—said his company wants to see more traditional institutions coming into crypto. When that happens, Binance will be looking to a billion crypto holders and beyond.

“Right now we estimate there are anywhere between 50 to 100 million people around the world that own some form of crypto, directly or indirectly, and we want to grow that to a billion. The thing is, how do we grow the pie bigger—that’s the only way for our industry to move forward.”