While Ukraine’s Ministry of Defence says it can’t officially receive crypto donations, NGO’s in the country are taking crypto to help with the conflict. 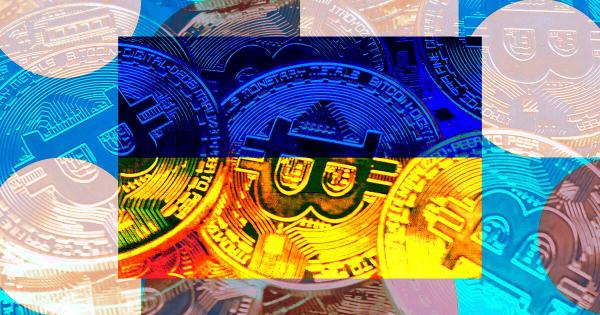 A non-governmental organization supporting the Ukrainian army has reportedly received around $4 million worth of Bitcoin donations.

According to available information, the donations were made by over 350 individuals, who donated between $1000 to $2000 to the group’s cause.

Elliptic revealed that the group had previously been receiving Bitcoin donations since August 2021. However, those donations were in small fractions of $4000 to $5000 per month. But the numbers suddenly surged on the back of Russia’s invasion of Ukraine.

Cryptocurrency has proved to be a robust and growing alternative (to traditional currency) – especially when it comes to donations from other countries.

With this donation, it is expected that the said NGO will use the funds to cater for the Ukrainian Army’s medical supplies, humanitarian relief, psychiatric services, military equipment, and other causes.

Notably, there are indications that the “Come Back Alive” group is not the only NGO receiving crypto donations; however, there is little to no information on how much has been raised by the other groups.

As of press time, donations in the wallet have topped $4 million as one donor gave the group 80 Bitcoin which is worth well over $3 million.

While the bulk of crypto donations flowing into Ukraine has been channeled through NGOs, a statement from Ukraine’s Ministry of Defense has revealed that it can’t officially accept crypto donations for its Armed Forces.

Per the statement, “National legislation does not allow the Ministry of Defense of Ukraine to use other payment systems (“Webmoney,” “Bitcoin,” “PayPal,” etc.).”

Interestingly, the Ukrainian government recently adopted a law on digital currencies that would legalize this asset class and crypto exchanges. Thus, its reluctance to accept crypto donations leaves a grey area on the issue of its adoption.

It should be noted that interested donors can still choose to donate through the traditional financial system.

Crypto donations have become quite common for political causes due to the ease, speed, and the fact that the currencies are censorship-resistant, making it an easy donation tool.

For instance, protesters in Canada resorted to using crypto donations after centralized fundraising organizations restricted their access to the raised funds.

We reported that funds donated to this cause were still moved despite the government’s best effort of censoring the campaign.

Protesters in Nigeria too used Bitcoin donations to circumvent government censorship of their donation efforts through centralized government institutions.

This means that crypto donations have been used to beat whatever restrictions or measures the government might have used to suppress the financial situations of those against them.