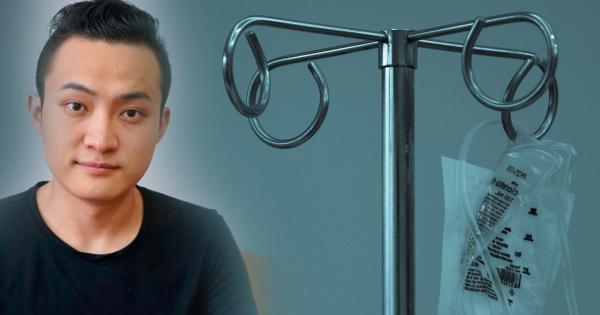 TRON and BitTorrent CEO Justin Sun just canceled his lunch with Warren Buffett due to sudden health complications just three days ahead of the meeting, according to a post on Weibo.

Within the hour Dovey Wan, founding partner of Primitive Ventures and expert on the Chinese cryptocurrency markets, posted a screenshot of an announcement from Justin Sun on Chinese social media app Weibo. A translation of the message from Sun:

“Thanks to friends from all walks of life for their concerns, I was in a hospital for sudden kidney stones, and I canceled the lunch with Mr. Buffett. At present, the physical condition is all stable and in the recovery period. I cannot accept the interview. Please forgive me. After the recent physical recovery, you will soon meet the outside world. The donation to the Glide Foundation has been completed and is still valid.”

Just pinged him he said he’s indeed sick … but the king of annocument will never let you down so let’s stay tuned 🤪🤪 pic.twitter.com/Aj3v1e9Z1X

Update: Several hours after Justin Sun’s message the TRON Foundation announced that the lunch would actually be postponed.

In June, Justin Sun won a charity auction with a bid of $4.57 million to have lunch with the renowned value investor. Buffett is a known Bitcoin skeptic, previously calling the asset “rat poison,” and a “delusion.”

In response to the news the price of TRX dropped 8.9 percent from $0.02862 to a low of $0.02607. The price is still in tumult as news about cancelation (or rescheduling) propagates.

Justin Sun, the founder and CEO of Tron, has been making headlines for the past couple of months for winning a lunch with the chairman and CEO of Berkshire Hathaway, Warren Buffett. The billionaire investor has been hosting charity auctions where attendees bid for a chance to have lunch with him every year for the past 20 years. This year’s auction, however, broke all records, as Sun’s $4.57 million bid was the highest recorded.

The crypto entrepreneur’s outrageously high bid was prompted by his admiration for Buffett, who he called “one of the most accomplished American businessmen in history.” Sun also wanted to use the opportunity to present the great potential of blockchain technology to one of Bitcoin’s harshest critics.

“I don’t think we can convince him that all crypto and blockchain is good, but I hope he walks away knowing more about the industry and its potential,” Sun told Forbes in an interview.

With the heavily-publicized event just three days away and just a few of the seven seats at the lunch filled, many were wondering who will be joining Sun and Buffett. Now, it seems like the lunch may not happen at all.

In an interview with CNBC, Justin Sun said that he would invite some of the most well-known names in crypto—including Ethereum co-founder Vitalik Buterin, Litecoin founder Charlie Lee, and Binance CEO Changpeng Zhao, along with a host of other “opinion, exchange, and mining leaders.”

Not everybody is looking forward to meeting Warren Buffett

However, the initial hype surrounding Sun’s guest list quickly dwindled as some of his first picks declined the invitation. Changpeng Zhao thanked Sun for the opportunity, but said he was unable to come as the San Francisco lunch was “too far.” Vitalik Buterin is yet to publicly respond to Sun’s invitation but has quickly been written off by many in the crypto community.

Sun even extended the invitation to U.S. President Donald Trump, offering to educate him about cryptocurrencies after Trump posted the notorious tweet citing his distaste for Bitcoin.

Nevertheless, some of the industry’s heavyweights will be joining Sun and Buffett in San Francisco’s legendary Quince restaurant. Earlier this week, Jeremy Allaire, CEO of Goldman Sachs-backed Circle, confirmed he would be attending the lunch.

The latest crypto figurehead to officially confirm his presence at the lunch was Yoni Assia. The founder and CEO of eToro thanked Sun for the invitation on Twitter and said he would be honored to join him and Buffett.

Justin, it is my honor to join you for lunch with @WarrenBuffett , A big step for bridging between the traditional finance world and the new one !
There is a huge opportunity to use #BlockChainForGood and happy to share our research on @TheGoodDollar with #TheOracleFromOmaha https://t.co/H7oSxO5QRg

Thanks, Justin. Huobi will definitely be there. https://t.co/u78Vw6xlgb

But, despite the heavy media coverage, the crypto community wasn’t all that happy with Sun’s guest list. Many pointed out that, apart from Charlie Lee, the founder of Litecoin, it lacked any of the industry heavyweights first mentioned by Tron.

Peter McCormack, the host of the “What Bitcoin Did” podcast, jokingly said that the list of those who declined Sun’s invitation was also “quite impressive.” Some of the industry leaders whose names were frequently brought up by the community were Morgan Creek Digital’s Anthony Pompliano, former VP of JPMorgan Tone Vays, and Andreas Antonopoulos, a best-selling author and Bitcoin educator.

However, the three haven’t received their invitations, leaving many to criticize Sun’s choice to invite only the heads of large coin issuers and trading platforms. Now, in light of Sun’s recent health complications, it appears the invitations won’t be relevant after all.

As excitement starts to once again build in bitcoin, it is important to consider why it may underperform as an investment.