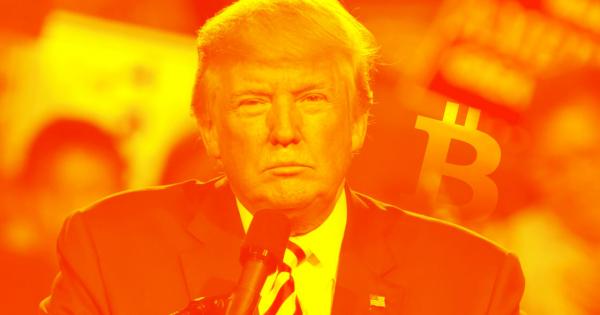 U.S. president Donald Trump finally expressed his views on Bitcoin and cryptocurrency, and the POTUS is not a fan.

Since his election to office in 2016, many pundits have speculated on his position on the predominant cryptocurrency. He finally aired his opinions:

I am not a fan of Bitcoin and other Cryptocurrencies, which are not money, and whose value is highly volatile and based on thin air. Unregulated Crypto Assets can facilitate unlawful behavior, including drug trade and other illegal activity….

President Trump reiterated many of the concerns that critics and the public have of the nascent technology. Well-known skeptics like economist Nouriel Roubini have decried Bitcoin for many of the same reasons denounced in the tweet, frequently calling it a “bubble” and a “scam.”

With Bitcoin’s use bootstrapped by adoption from Silk road, and with its widespread use in money laundering and tax evasion, it’s no surprise that President Trump is against cryptocurrency.

President Trump also attacked Facebook’s Libra cryptocurrency. As expressed by NEO Seattle development lead John deVadoss, corporations entering the traditionally government-controlled domain of money will run up against stiff resistance, as evidence by demands from Congress. It seems the POTUS does not deviate on this point:

….Similarly, Facebook Libra’s “virtual currency” will have little standing or dependability. If Facebook and other companies want to become a bank, they must seek a new Banking Charter and become subject to all Banking Regulations, just like other Banks, both National…

Furthermore, with the escalating trade war with China and global economic uncertainty, it makes sense that officials in the U.S. government would want to maintain the dollar’s grip as the world’s global currency.

…and International. We have only one real currency in the USA, and it is stronger than ever, both dependable and reliable. It is by far the most dominant currency anywhere in the World, and it will always stay that way. It is called the United States Dollar!

President Trump has not expressed how he will manifest his bleak outlook on BTC. It is uncertain whether his administration will enact regulatory restrictions or other hurdles to adoption in the United States.

This is not the first time an acting politician has derided Bitcoin. In May, California Democrat Brad Sherman called for members of Congress to join him in introducing a bill to outlaw cryptocurrency purchases by Americans. The bill has yet to garner noteworthy support.

President Trump’s position is in stark contrast to Democratic presidential candidate Andrew Yang, who is explicitly looking to get elected on a pro-cryptocurrency platform.

Caitlin Long, an attorney and the co-founder of the Wyoming Blockchain Task Force, was critical of President Trump’s position. The State of Wyoming is paving the way for progressive blockchain regulation in the U.S. with laws that make banking, stock issuance, and doing business easier with cryptocurrency in the State.

2/ Your staff isn’t giving you good advice (I don’t see anyone on your staff who has experience in this new asset class). The US payment system hasn’t really innovated in 50 yrs—it’s unstable & inefficient. I’ve been surprised that your administration has coddled it instead of…

TechCrunch founder Michael Arrington suggests that the President’s stance will push Democrats to the other end of the spectrum on cryptocurrency regulation, further polarizing an already partisan election.

The only thing we know with absolute certainty after this tweet is that the dems will now be enthusiastic crypto currency bulls, regardless of their previous positions. https://t.co/mTZgS7huPz

Another influencer, Preston Byrne, a pro-crypto attorney who focuses on early-stage technology companies, called his voting habits into question following the tweets.

Hey. I'm basically the only guy in the crypto industry who voted for you (or admits it). Can I convince you otherwise?

With an estimated 8 percent of Americans invested in cryptocurrency, President Trump may, once again, be alienating potential voters.

With the November 2020 re-election quickly approaching, in what is widely considered a likely tight upcoming race, this could cost the President precious votes at the polls.

Impact on the market

Overall, the markets seem largely unfazed by President Trump’s jab at the sector.

Since the tweet, roughly an hour ago, the coin actually climbed another 1.3 percent. As Bitcoin advocate and developer Jimmy Song put it, this could be another case of the coin’s “anti-fragility,” or gaining value in the face of devastating events and bad news.

That said, the news may have a greater impact as word spreads, so the verdict is still out.

This story is developing, check back shortly.

Congressman calls for a bill to outlaw cryptocurrency in the US