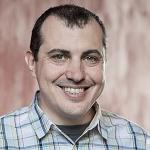 Andreas M. Antonopoulos is a best-selling author, speaker, educator, and one of the world’s foremost bitcoin and open blockchain experts. He is known for delivering electric talks that combine economics, psychology, technology, and game theory with current events, personal anecdote, and historical precedent effortlessly transliterating the complex issues of blockchain technology out of the abstract and into the real world.

In 2014, Antonopoulos authored the groundbreaking book, Mastering Bitcoin (O’Reilly Media), widely considered to be the best technical guide ever written about the technology. His second book, The Internet of Money, unveiled the “why” of bitcoin—and became a bestseller on Amazon— and led to the wildly successful follow-up The Internet of Money Volume Two. His fourth book, Mastering Ethereum (O’Reilly Media) was published in December of 2018.

He is a teaching fellow with the University of Nicosia, serves on the Oversight Committee for the Bitcoin Reference Rate at the Chicago Mercantile Exchange, and has appeared as an expert witness in hearings around the world, including the Australian Senate Banking Committee and the Canadian Senate Commerce, Banking and Finance Committee.

Why Andreas Antonopoulos Is Against Bitcoin ETFs Despite the Hype