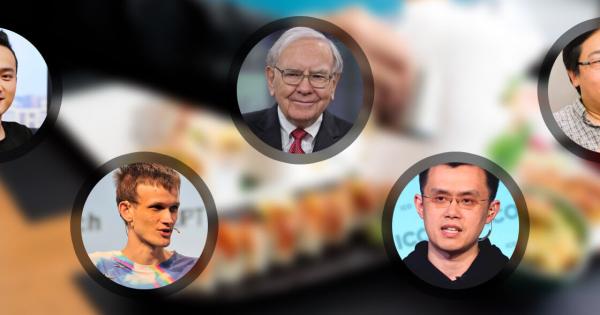 As part of his winning $4.6 million bid for lunch with Warren Buffett, TRON CEO Justin Sun has the opportunity to invite up to seven guests to accompany him. His preliminary picks—Vitalik Buterin from Ethereum, Charlie Lee of Litecoin, and Changpeng Zhao (CZ) of Binance.

After an agonizing week of teasers, Justin Sun revealed that he “won and nailed” a lunch with Warren Buffett in an auction going towards the GLIDE charity. The news sent the price of TRON and BitTorrent flying.

Now, it seems the stunt is paying dividends in publicity. Justin Sun’s win was covered by Bloomberg, WSJ, and even landed him an interview with CNBC.

As part of the lunch, Justin Sun will have the opportunity to invite up to seven guests to join him over steak with the legendary value investor. Sun previously alluded that he would invite “several industry leaders” to join him.

In an interview with CNBC, Justin Sun specified that he would invite some of the most well-known names in crypto—including Ethereum figurehead Vitalik Buterin, Litecoin founder Charlie Lee, and Binance CEO Changpeng Zhao, along with a host of other “opinion, exchange, and mining leaders.”

CZ declined the invitation, citing that meeting in New York City was “too far,” and instead suggested inviting famous Bitcoin proponent and investor, Anthony Pompliano.

.@justinsuntron kindly invited me to go, but I can't make it. Too far. I guess that's like turning down $1,000,000, assuming 5 guys going, lol… But very much appreciated.

I would totally recommend inviting @APompliano.

One reason for bidding on the lunch, explained Sun on CNBC, is that he is a “longtime believer” in Warren Buffett’s value investing strategy and made “lots of his fortune” thanks to inspiration from Buffett. The lunch represents a way to “payback” Buffett.

But Sun’s primary motive for the lunch with Buffett? to become the “bridge” between institutional investors—such as Buffett—and the crypto and blockchain community.

“I want to bring seven leaders of the blockchain industry to communicate with Warren Buffett about blockchain technology and the opportunity behind it,” said Sun.

According to the TRON CEO, Warren Buffett doesn’t have the “right source” for blockchain and is mislead by the media. The industry has made tremendous progress since 2009, as evidenced by involvement from companies such as Facebook and JPMorgan Chase, according to Sun.

When asked whether Justin Sun could change Warren Buffett’s mind about Bitcoin over the three-hour lunch, he said:

“There’s too much to change his mind on Bitcoin in a three-hour lunch. We will offer him a different opinion on Bitcoin and blockchain technology.”

However, with the roles reversed, Justin Sun finds it unlikely that Buffett will “change his mind.”

“Warren Buffett is 60 years older than me. I want him to learn what the younger generations are doing.”