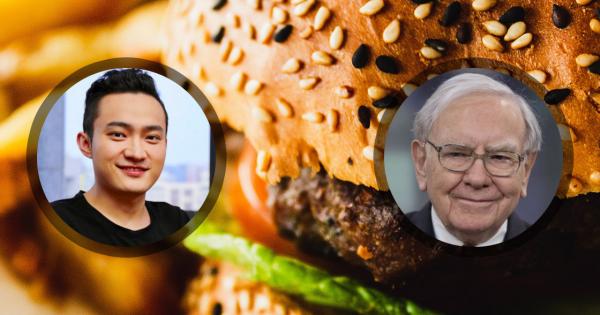 Sun in a press release:

“I’m a long-term believer of Buffett and his long-term value investing strategy. As some of you might know, the CEO of Berkshire Hathaway has said publicly he sees no ‘unique value’ in Bitcoin, the world’s largest cryptocurrency.”

However, Sun is adamant on changing Buffett’s stance on Bitcoin, who is known to have previously called Bitcoin “rat poison,” and a “delusion.” Sun further stated:

“With the right communication and understanding, Buffett will change his overall stance on cryptocurrency and blockchain.”

On May 26 the CEO announced the potential announcement, teasing his followers that “something huge and amazing” was going to happen to TRON and BitTorrent.

The teaser was effective in creating hype around TRX and BTT, with the tokens respectively surging 24 and 58 percent over the two days following the tweet. It turns out the “amazing” event for the two companies is a $4.6 million charity donation at best and a frivolous marketing expenditure at worst.

He used $4.57 million of ICO money you gave him
for
a
lunch
date https://t.co/OyQntofY74

Buffett has been holding the lunch auction since 2000 with all proceeds going towards GLIDE—a non-profit which provides food, housing, and healthcare to those in poverty in the San Francisco Bay area.

Buffett will dine with Justin Sun and up to seven invitees at the renowned steakhouse Smith & Wollensky in New York City. Sun will invite “several industry leaders” to accompany him based on input from the TRON community.

Plenty of cash to burn?

Although the expenditure may seem questionable, it is only a tiny fraction of the TRON Foundation’s coffers.

TRON initially raised $58 million from its ICO in September 2017, selling 40 billion of its 100 billion TRX tokens. Since then TRON has grown to become the 11th largest cryptocurrency by market capitalization, valuing $2.4 billion.

The remaining 60 billion tokens were allocated to the TRON Foundation and initial backers. Based on current estimates of tokens held by insiders and the Foundation, the company has roughly $1 billion in cash to burn at current TRX prices.

The announcement (and proceeding announcements) generated a fair share of controversy from the crypto community. Yet, this is far from the first time Sun has garnered criticism for engaging in questionable marketing.

In January of 2018, influential figures in the crypto community—including Vitalik Buterin—criticized Sun for blatantly plagiarising the Ethereum, IPFS, and Filecoin whitepapers. Sun attributed the plagiarism to “translation errors.”

More recently in March, Sun received flak for a botched Tesla giveaway. TRON was first accused of not honoring the original winner of the competition. Then, was evidence that 87 ‘winners’ of the giveaway were from the same IP address, suggesting the competition was rigged.

His likely motives for the giveaway? To beat Vitalik Buterin, the co-founder of Ethereum, in follower count. Later it was discovered that many of these new followers were likely bots. The move was part of several different vanity contests with Ethereum, with Justin Sun boasting about metrics ranging from GitHub commits to total onchain transactions.

That same month, Justin Sun announced a partnership with controversial stablecoin company Tether to launch a new ‘fiat-backed’ token on the TRON blockchain. He went as far as to offer an outlandish 20 percent APR to incentivize holders of the stablecoin.

In April, Justin Sun mistook a marketing email from Liverpool FC and spun it into a ‘partnership’ with the soccer team. A day later, the New York Attorney General issued a court order against Tether’s parent company for allegedly losing $850 million in customer deposits.

Criticism from the community

Understandably, Sun’s latest stunt attracted ridicule from the crypto community. A poll from software engineer Pierre Rochard suggested the funds would have been better spent on improving TRON’s technology.

Random question unrelated to any news

(2) $4.5 million on a dozen protocol devs working on Taproot for 2 years

One notable cryptocurrency trader suggested the most logical response to lunch with Sun is to short TRX.

Warren Buffett is about to get done with his lunch with Justin Sun, log right onto Bitmex, and short Tron to 0

As one commentator summarized:

Justin Sun's announcement of announcements is that he paid 4.5 million dollars for a dinner with Warren Buffet. So he spent 4.5M of company money on a dinner with an old boomer who hates & doesn't understand crypto… he is desperate for hype. So glad Chainlink is professional.