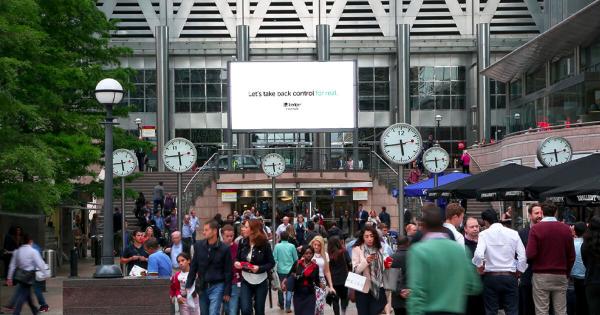 In a press release shared with CryptoSlate, Ledger said it saw Johnson’s “taking back control” Brexit tagline as a means for individuals to reclaim their financial autonomy.

Financial independence has been a theme central to the Brexit debate, a saga that has gripped the nation since a 2016 referendum when a majority voted that the U.K. should leave the EU. Ledger has opportunistically looped crypto into the Brexit conversation in Canary Wharf, the world’s de facto center for fiat currency, hosting the bulk of the global forex market’s $5-trillion-a-day trading volumes. Ledger wrote:

“On Brexit day, Ledger is taking out a digital billboard in Canary Wharf, the center of finance in London, to promote the core values of cryptocurrencies, which align with the underpinnings of Brexit.”

Yet Ledger, an EU-based firm headquartered in Paris with offices in San Francisco, U.S.A. and Vierzon, France, insisted the advertisement has no political component and that the company does not take a stance on the U.K.’s widely controversial decision to leave the EU.

A blog post by Ledger conveyed a different message to their official line and rung of political charge—the firm pointed to crypto as a “borderless” medium of exchange that could help “bring the world closer together” as the U.K. tightened its borders.

“Boris Johnson, the British Prime Minister, has always expressed that the UK should “take back control”. During his campaign, he highlighted the financial sovereignty of the country and needing to limit its borders. At Ledger, we believe that taking back control means so much more.”

Furthermore, Ledger aimed to clarify the link between Brexit and crypto by stating:

“There are quite a few similar themes in the two, albeit at times opposing each other. For example, #crypto is all about borderless financial freedom, whereas the #Brexit focuses on closing its borders with financial freedom from the EU in mind.”

London has long been a financial stronghold in Europe, with many companies in Asia using the British capital as a stepping stone to reach European markets.