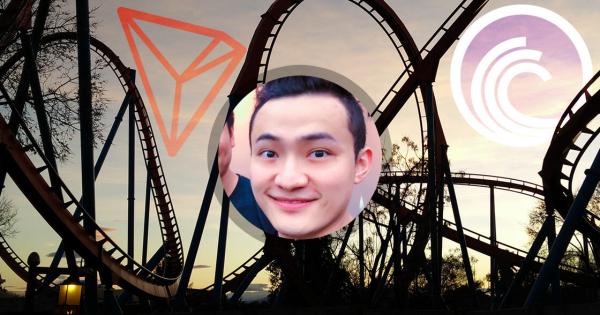 Justin Sun, the founder of Tron and one of the most vocal crypto personalities on Twitter, caused quite a stir in the crypto community. On Sunday, May 26, Sun posted a tweet saying that “something huge and amazing” is going to happen with Tron and BitTorrent.

Teasing a possible future announcement isn’t anything new to Sun, who has become an internet meme in the crypto industry due to his sensationalist tweets. However, Sun’s latest announcement was more cryptic than usual, as he even noted that there was only a “70 percent chance to win and nail it.”

Something huge and amazing going about #TRON and #BitTorrent. I will share with you after June 1. I think I have 70% to win and nail it. Fingers crossed! $TRX $BTT

Sun’s tweets caused quite a reaction on social media, with many users mocking him for basically announcing an announcement that won’t happen for days.

Others have pointed out that the move was a marketing ploy used to pump the value of TRX and BTT.

As a testament to Sun’s ability to influence the market, the price of both TRX and BTT skyrocketed. TRON jumped by 11 percent within two hours of Sun’s announcement, trading at $0.03 at noon on Sunday. According to CoinMarketCap, the price growth was followed by a 30 percent influx in daily trading volume, which reached $800 million.

BitTorrent, meanwhile, rose by 18 percent by noon the same day, which showed that the crypto industry was betting on something big going on with BTT.

BTT bulls weren’t wrong. Sun released yet another announcement in the early hours of May 27, revealing the “first scalable file decentralized system,” the BitTorrent File System (BTFS), will go live in the next 3 days.

According to the update, BitTorrent will be a huge step up from Tron, which currently has over 1,000 full nodes. BTFS will have around 100 million user nodes, Sun said, making it the largest decentralized peer-to-peer network.

Welcome to the next generation of decentralized storage systems! #BTFS will be the largest decentralized P2P storage network with close to 100 million @BitTorrent user nodes, over 1000 #TRON full nodes, 27 SR nodes, and global #TronGrid nodes. 3 days left! Are you excited? pic.twitter.com/Gj3TzTM1Qg

The market was quick to respond for the second time in 24 hours, and BTT gained another 12 percent following Sun’s remarks. According to CoinMarketCap, BTT gained over 100 percent since May 1 and recorded two ATHs this week alone.

A high severity bug on the TRON network could have allowed an attacker with a single computer to crash the network, as first reported by TNW. 2 min read

TRON DApps have seen a rise in popularity over the last year, with recent data showing that active users spend, on average, $102 TRX per day on DApps. 2 min read