Tough times lay ahead, but Elon Musk shares his advice on what to do, which inadvertently leads to price pumps for Bitcoin, Ethereum, and Dogecoin. 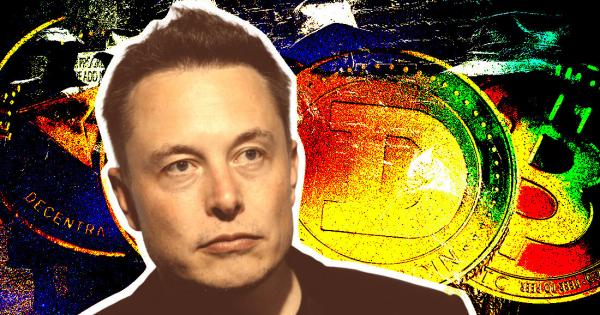 He advocates moving capital to “physical things,” i.e., not cryptocurrency. However, his tweet still spiked the three mentioned tokens, demonstrating that the “Elon effect” is alive and well.

Of the three, Dogecoin moved the most, with an 8% swing to the upside, peaking at $0.1223 in the early hours (GMT). However, the market took back most of those gains to close the hourly candle at $0.1156.

Similarly, Bitcoin saw a 2% spike, with Ethereum posting a 3% swing. Like Dogecoin, profit-taking leaves a long top wick on both price charts.

Last year, Musk revealed his crypto portfolio consists of Bitcoin, Ethereum, and Dogecoin only. The disclosure came about in an apparent snub of Shiba Inu, which was trading at all-time highs at the time.

Nonetheless, the present cost of living crisis is evolving into dissatisfaction with the political class, including the ultra-wealthy.

The effects of inflation become more evident each day, none more so than at the petrol pump. Although globalpetrolprices.com puts the price of petrol at $4.46/gallon in the U.S, some report prices as high as $7.56/gallon in high tax states.

Runaway inflation is primarily caused by an increase in the money supply not supported by economic growth or a situation where demand exceeds supply. Unfortunately, through the last two years’ events, global economies face the double whammy of dealing with both conditions.

Sharing his thoughts on the matter, MicroStrategy CEO Michael Saylor predicts worse to come, leading to a collapse in weaker currencies and a flight to scarce assets, like Bitcoin.

What does Musk advise?

Musk takes a more balanced view, saying Saylor’s take was “not entirely unpredictable.” But rather than advocate Bitcoin, Musk encourages people to own physical things, including real estate or stocks in well-regarded companies.

At the same time, Musk also said that he intends to hodl his Bitcoin, Ethereum, and Dogecoin holdings.

As a general principle, for those looking for advice from this thread, it is generally better to own physical things like a home or stock in companies you think make good products, than dollars when inflation is high.

I still own & won’t sell my Bitcoin, Ethereum or Doge fwiw.

The jury is still out on whether Bitcoin, and by extension cryptocurrency, is an inflationary hedge. No doubt, more will be revealed in the coming weeks and months.