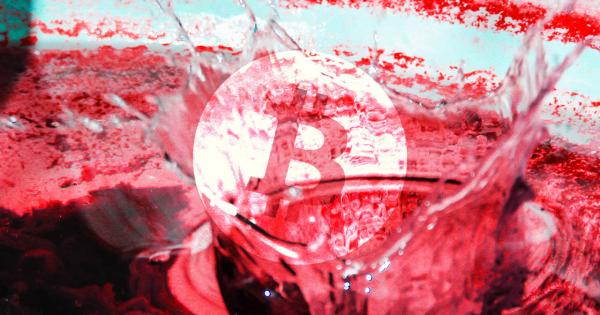 Bitcoin has stabilized around the $8,600-mark hours after a ferocious sell-off led on BitMEX saw price decline more than 13 percent, liquidating more than six hundred million long contracts on the Seychelles-based exchange, according to data on Datamish.com.

The decline, Bitcoin’s largest intraday plunge in months, saw the largest cryptocurrency by market capitalization shed 13.5 percent in USD in under two hours starting at around 18:00 U.T.C. and ultimately seeing the coin go as low as $8,200 by 19:30.

The sentiment seems largely unchanged after the drop, however, with the Crypto Fear & Greed Index, an aggregation of various sentiment indicators, indicating a slight move towards fear.

A confusion of theories have surfaced to explain the cause of the savage decline, yet a compelling one is that it was fuelled—perhaps not started—by a series of liquidations and margin calls on 100x leverage crypto derivatives giant BitMEX.

As Bitcoin broke out of its monthslong consolidation between $9,300 and $10,950 to the downside (denoted below by red lines), the leveraged long positions would have outrun their margin and been liquidated—effectively creating a waterfall of market sell orders forced by the platform, and exacerbating the decline.

The data seems to indicate as much. BitMEX saw volumes worth $2.5 billion during the sell-off, ultimately making the day one of the exchange’s biggest trading days in months, and seeing almost 6 percent of all long liquidations to date this year occur during the two-hour window.

Concerns that leveraged derivatives exchanges such as BitMEX can collapse Bitcoin’s price in this fashion have circulated for years and have apparently inspired a number of non-leveraged initiatives, perhaps most topically Bakkt’s just-launched futures product.

As reported previously by CryptoSlate, Monday, the first day of Bakkt’s physically delivered contract, saw a fraction of the debut of its leveraged, cash-settled competitor, the CME Bitcoin futures contract.