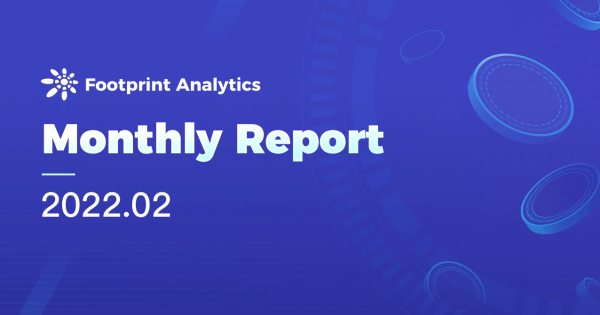 February saw a steady run of applications in the blockchain sector despite declining macroeconomic conditions triggered by the conflict in Ukraine. DeFi recovered slowly, with some blockchains and cryptocurrencies showing a modest recovery.

Conversely, the NFT market is cooling in terms of the monthly trading volume. This report will analyze the overall situation of the crypto market in February according to data.

Here’s how the Russian invasion of Ukraine affected the price of BTC and ETH:

According to Footprint Analytics price trends, as of Feb. 28, the price of BTC was $43,286 and the price of ETH was $2,929.53, up about 10% sequentially. This also means that cryptocurrency prices are highly correlated with national policies and macroeconomic conditions.

The conflict between Russia and Ukraine is what triggered the liquidation of more than 80% of investors in the AAVE lending agreement on Feb. 24. However, compared to January, the amount liquidation in February fell from $425 million to $18.96 million, a decrease of 95.53%.

Following the trend of a full downturn in the DeFi market in January, February saw a slow recovery.

TVL recovered to $207.18 billion from $205.02 billion, ending the month with a slight 1.06% increase in TVL. Despite the modest increase in TVL, the overall size of the market remains above $200 billion.

Terra overtook BNB Chain for the second spot with $18.83 billion in lockup volume in eight months and pulled away from BNB Chain in February. Of course, Terra TVL’s growth is fueled by the Lido and Anchor protocols.

LUNA’s growth is due to two main factors:

Curve and MakerDAO are still untouchable, they are tied to a stablecoin and their stability is trusted by most users.

Among the many DeFi protocols, the most prominent and fastest-growing are Lido (+46%) and Anchor (+52%), with TVLs of $11.2 billion and $10.3 billion respectively, outpacing protocols such as Compound and Uniswap v3. Both Lido and Anchor are deployed on Terra, which uses an algorithmic stablecoin as an entry point to give users a UST stablecoin for saving and lending.

NFT Trading Volume Down 67% in February Compared to January

According to Footprint Analytics data, NFT transaction volume in February was $2.787 billion, down a whopping 67% from January.

Does it appear that investor interest in NFT is declining? Actually, for NFTs, since January’s numbers were at a high level, the drop in February’s trading volume may have been a simple pullback.

On top of that, investors’ attention has shifted to cryptocurrencies amid the conflict between Russia and Ukraine, and they see BTC as a safe haven.

OpenSea Becomes a Target for LooksRare and X2Y2

In February, OpenSea’s trading volume growth slowed significantly, especially since Feb. 14, when the average daily trading volume trended downward. This may be related to the phishing attacks on OpenSea and the volatile global market situation.

However, the slowdown in OpenSea has led to the rise of emerging exchanges  LooksRare and X2Y2. In early February, LooksRare managed to attract a major share of OpenSea’s NFT trading volume, but the short-term incentive program did not threaten OpenSea’s dominance.

Terraforms and Meebits are the Most Prominent NFT Projects

According to Footprint Analytics, Terraforms and Meebits saw a spike in transactions from Feb. 16 to 21, with volume reaching $56 million.

Older NFT programs such as Axie Infinity and Bored Ape Yacht Club have more consistent trading volumes and are the most engaged by users.

Data shows that investments in February were $4.7 billion, down 19.6% compared to January. In terms of investment sectors, the NFT sector saw the biggest drop as investors have shifted their attention to cryptocurrencies and reduced their investments in NFT.

In contrast,  Web3-based technologies are becoming more important as decentralized systems become more mainstream. In addition, a16z is also the largest investor in the Web3 sector, with a team of former officials from across the U.S. government. This drove the largest increase in Web3 investments in February (+79% MoM).

In February, despite the bearish environment, adoption in the blockchain sector continued steadily and trend slightly upwards. In addition, the Russian-Ukrainian conflict and economic sanctions exposed the need for a decentralized ecosystem.

On the other hand, NFTs faced a sharp drop in trading volume and a shift of investors to the Web3 sector, expecting it to recover to its January peak in March.