The cryptocurrency market is going through a correction after the recent surge above $8,000. 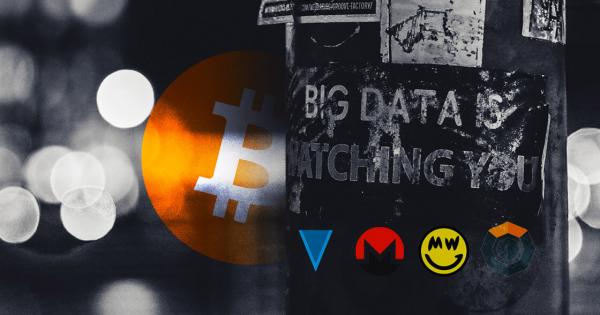 The cryptocurrency market is going through a correction after the recent surge above $8,000. Yet, relative to BTC, will privacy coins fare any better? Using two indicators—support resistance levels and moving averages—it is possible to assess the outlook for Monero, Zcash, Verge, Komodo, and Grin.

The first technical attribute that will be used to analyze the mid-term future of the top anonymity coins is the support and resistance points. According to Investopedia, these are defined as a series of predetermined “price levels on charts that tend to act as barriers, preventing the price of an asset from getting pushed in a certain direction.”

Support points are able to hold or pause the market valuation of an asset during a downtrend, due to the volume of buy orders. Conversely, resistance points contain the price of an asset from continuing to ascend during an uptrend because these can be seen as profit taking levels where the volume of sell orders are high.

Additionally, the moving averages (MA), which are some of the most popular indicators, will help determine the short-term outcome of the cryptocurrencies in this analysis. A moving average is a trend line produced by looking at the average price of an asset over a specified period of time.

On the 1-day chart, Monero went through a consolidation period from Apr. 3 until May 10. During that time span, it was trading within a series of support and resistance levels between $73 and $62.

After XMR broke out of that range, it went up to the next resistance point sitting at $78.6 which became support once it was breached. Then, it went up another 20 percent to try to break above the $94 resistance point, but it failed to do so and retraced to the  $78.6 support level.

Now that XMR is sitting at support, a rebound could be expected from this area back to resistance. However, if this privacy coin is not able to gain enough bullish momentum to bounce off it could continue to fall down to the next support levels. 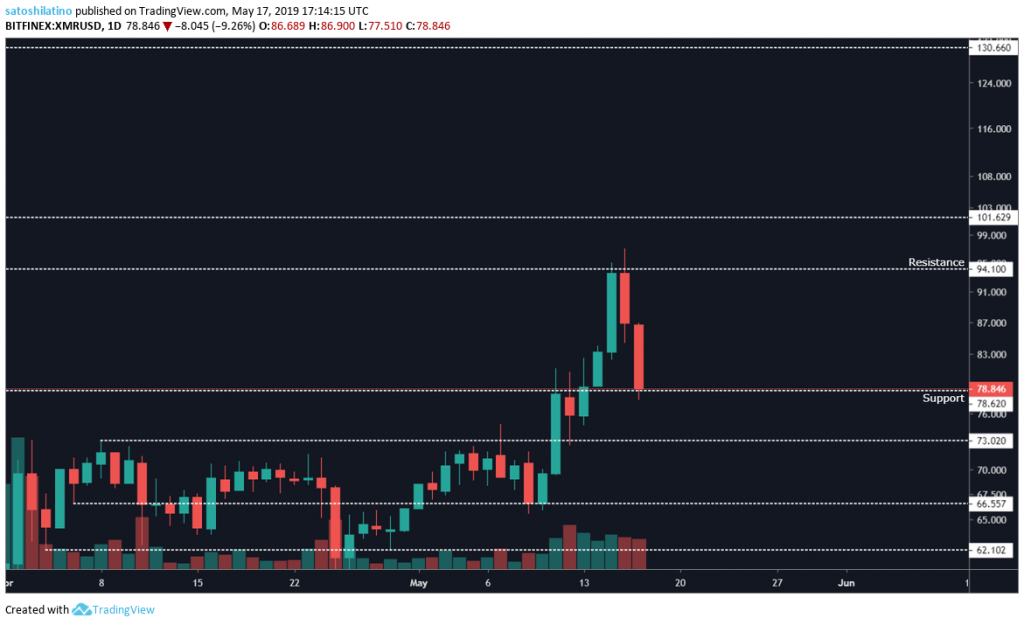 On the 4-hour chart, it seems like the recent drop in monero’s market valuation was determined by the break of the 7 moving average. Although the 30 MA could not hold the price from falling further, it seems like the 50 MA could be acting as a support point. Breaking below the 50 moving average could take Monero down to test the 100 MA or the 200 MA, sitting at $74.5 and $71.5 respectively.

To the upside, XMR could have a hard time breaking above $84 since that is where the 7 and 30 moving averages are crossing. But, if it is able to move above this level it could try to retest the $94 resistance level. 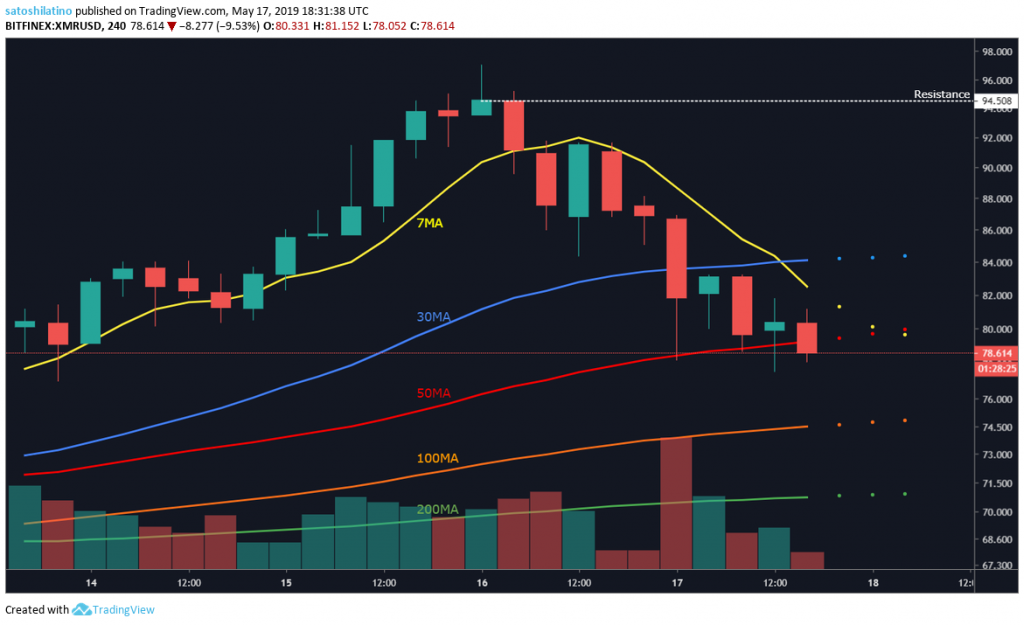 The $61 support level has been a key support point for ZCash. This level was able to hold its market valuation for almost a month until ZEC was able to gain bullish momentum and go up 28 percent. After it reached the $78 resistance level a bearish spinning top candle formed predicting a pullback, which indeed influenced a retrace to the $68 support level on the 1-day chart.

If the $68 support level is able to hold, it could trigger a rebound to the $78 resistance level or even higher. Breaking below this zone could take this privacy cryptocurrency further down. 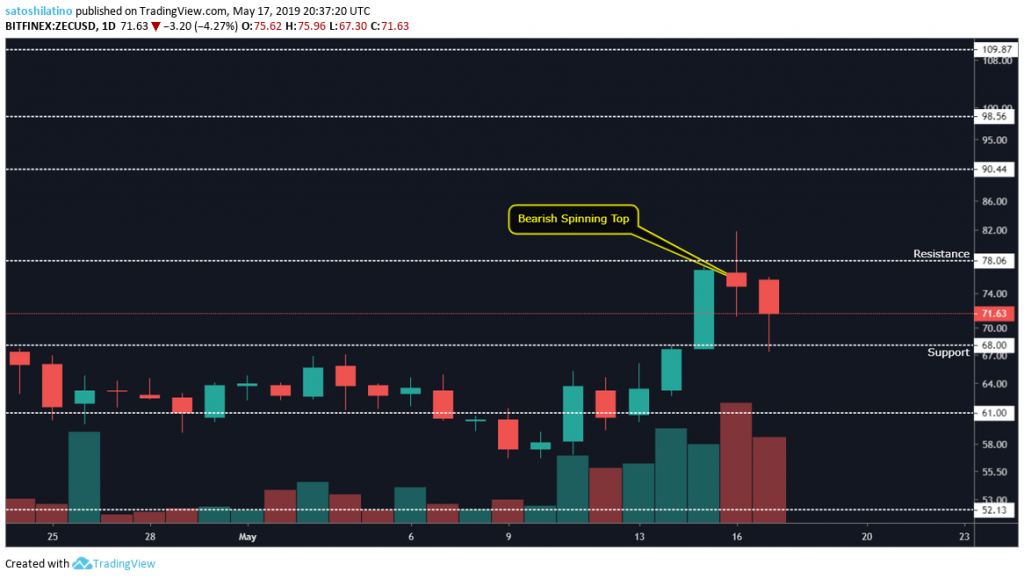 On the 4-hour chart, the 30 moving average has been able to hold ZEC from descending even more after the 7 moving average failed to do so. A bullish engulfing candle formed around this zone predicting that ZCash could be about to bounce off.

If this cryptocurrency is able to trade above the 7 MA once again, then it could be expected that it will try to test the $78 resistance level. However, if there is not enough buy pressure and ZEC breaks below the 30 MA it could find some level of support around the 50 MA. 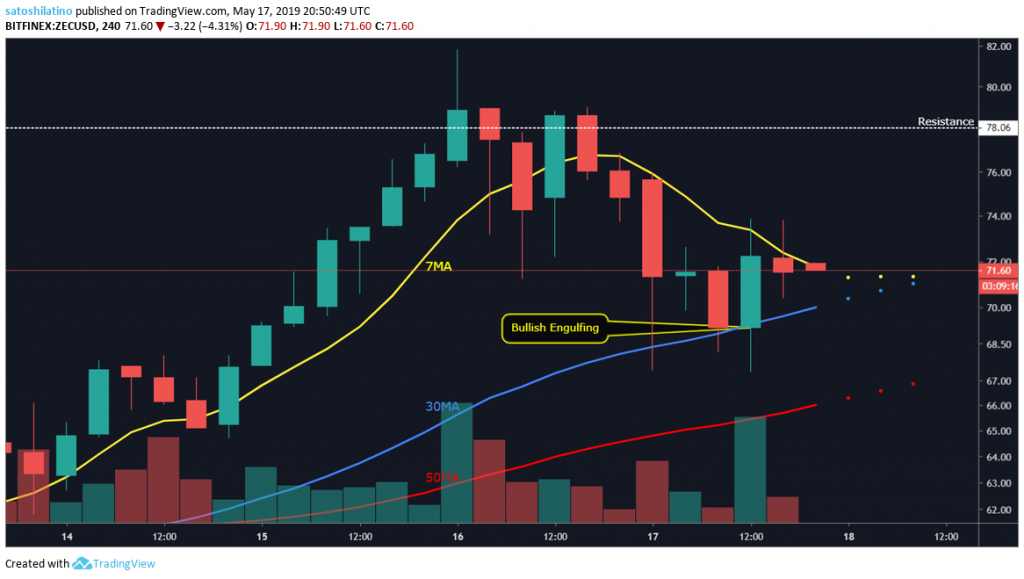 On the 1-day chart, Verge failed to break above the $0.011 resistance point. This was followed by a 19 percent pullback. If XVG’s market valuation continues to deflate it could try to test the $0.0084 support level. A further drop could take XVG down to $0.007, which represented a very strong support point that held this crypto’s price for over a month. 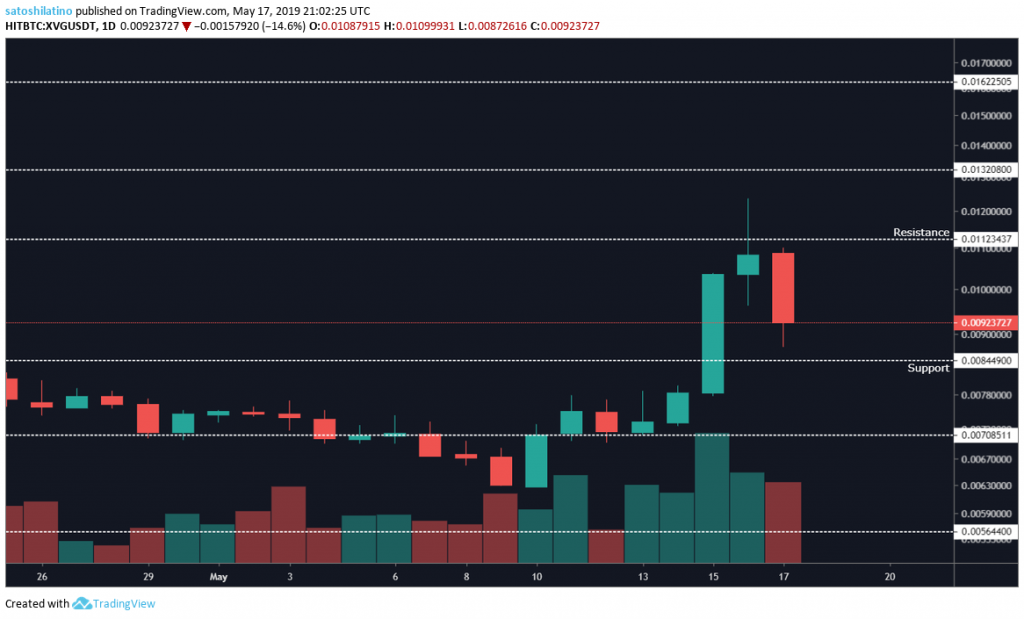 Breaking below the 7 moving average created a massive drop in XVG’s market valuation that took it down to the 30 moving average. Around that zone, a reversal candle formed which could be signaling that Verge is about to rebound to the $0.011 resistance point. Only if, it can first break above the 7 moving average with high volume. 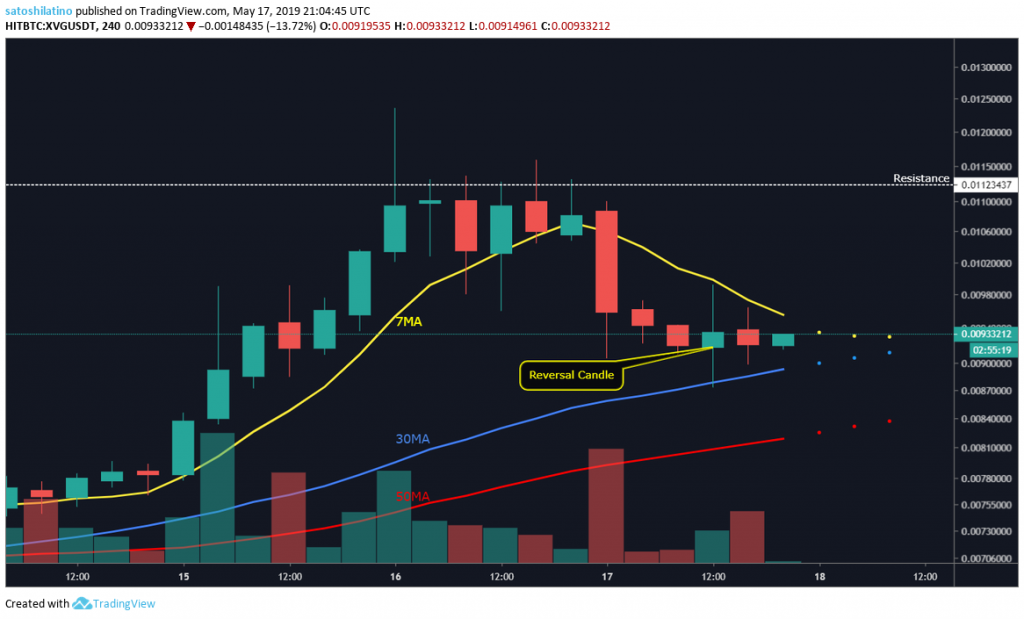 Komodo has been trading between the $1.22 resistance level and the $1 support level for over a month. Although it has tried to break above and below those levels multiple times, it goes back to trade within this range. A spike in volume that can take KMD out of this trading zone remains to be seen. 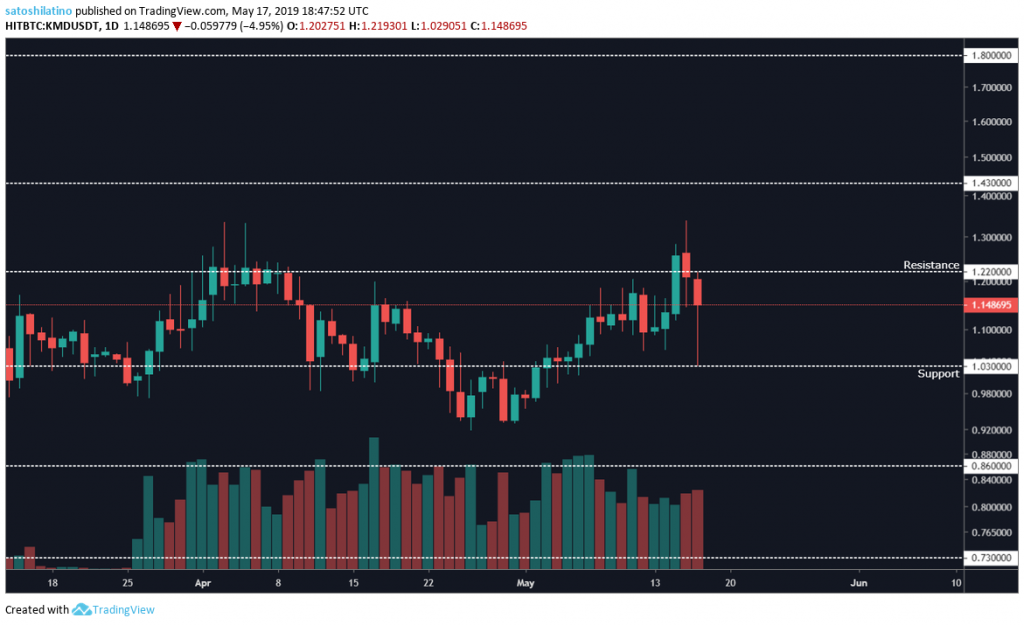 To the downside, it seems like the 100 and 200 MA are providing support for Komodo’s price but breaking below them could trigger lower lows. 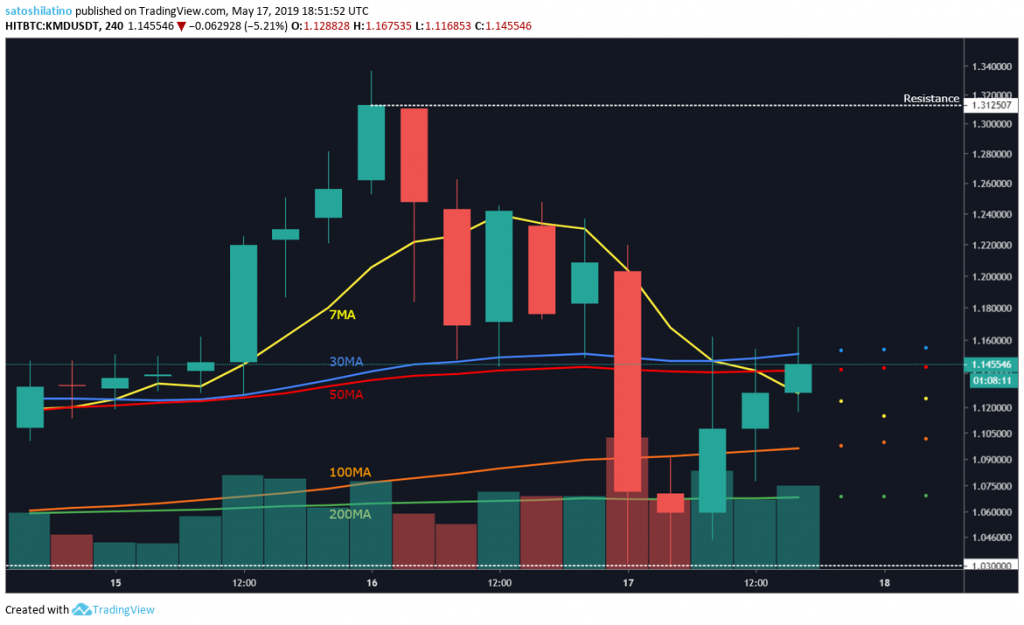 The hype around Grin seems to have faded as it has experienced a steady decline in its price since it was released into the market earlier this year. The selling pressure does not seem to be over as every time it is able to gain some bullishness the long-term bearish trend reasserts itself.

On the 1-day chart, it is noticeable that grin must continue to trade above the $1.88 support zone, which is the lowest point it has reached so far. Breaking this level to the downside will get it to make new all-time lows.

Nonetheless, this privacy coin is being supported by the $2 zone at the moment. If it is able to hold around this area it could go back up to the test the $2.34 resistance point or even higher if the volume picks up. 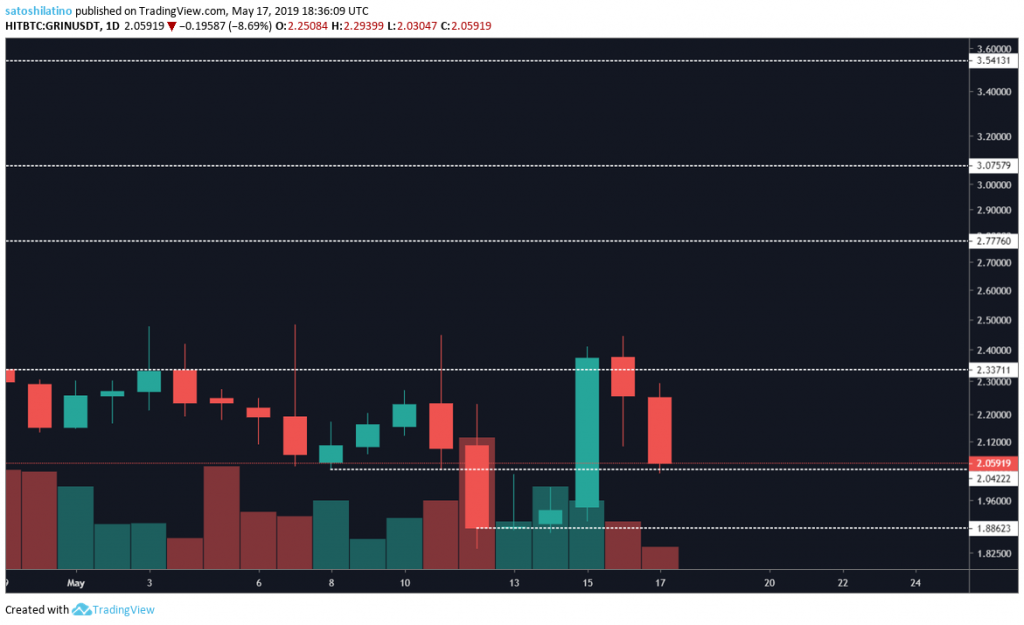 On the 4-hour chart, it can be seen how the 30 moving average is the last barrier grin has before a drop down to the $1.88 support level. This moving average has been holding for over the past twenty hours and it could be getting weaker as time goes by. It remains to be seen whether bullish momentum that could take this cryptocurrency above the 7 moving average and potentially to test the $2.4 resistance level, given by this chart. 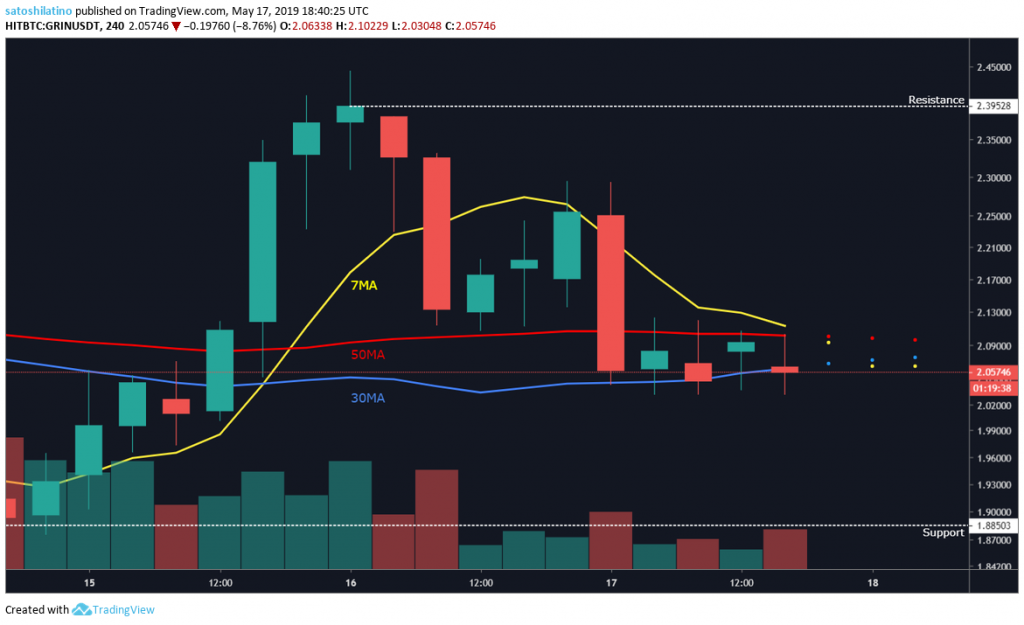 After going through the support and resistance points of the top privacy cryptocurrencies, it can be implied that a rebound could come soon for most of them. Bullish momentum could be starting to pick up in the near future allowing these coins to recover from the recent pullback.

However, it will be worth paying attention to the support level of the digital assets mentioned above because a break below that level could push them further down.

Komodo is an open-source blockchain technology suite allowing users and businesses alike to benefit from an array of disruptive technologies.. Learn More