Altcoins across the board—including Ethereum, Bitcoin Cash, Litecoin, EOS, and Binance Coin—are surging as Bitcoin makes its ascent past $7,000. 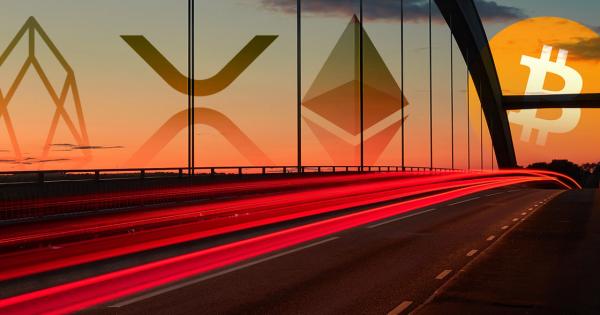 Altcoins across the board—including Ethereum, Bitcoin Cash, Litecoin, EOS, and Binance Coin—are surging as Bitcoin makes its ascent past $7,000.

Altcoins have been hemorrhaging capital as bitcoin climbed from $5,687 on May 7 to $6,343 on May 11—an 11.5 percent increase. The relationship is visible when looking at overall market capitalization excluding BTC, which has a direct relationship to the average performance of all altcoins.

Overall market capitalization excluding bitcoin, from the May 7 to May 10, decreased by 9.4 percent from its peak to its localized low. This translates to across the board losses for altcoins.

It appears that bitcoin decoupled from the overall market and capital from altcoins flowed into the dominant cryptocurrency. Some even went as far as to call the relationship between bitcoin and altcoins a “massacre.”

Examining the relationship between bitcoin and altcoins

The relationship between bitcoin and altcoins is cyclical according to Avi Felman, a trader at Wave Financial:

4/ The bull run is started by Bitcoin posting strength.

Next, a few alt coins (such as ETH and XRP in 2017) lead the charge up and shave off Bitcoin dominance.

Then, at the peak of the bull will come the part called “altseason” where profit spills over into other altcoins.

Felman points to historical data from the bull run of 2016 to 2017, where the cycle was observed twice. Gains in bitcoin are followed by major altcoins—such as litecoin, bitcoin cash, ethereum, and XRP—and then by minor altcoins, such as chainlink, decred, and neo.

This is observable by looking at bitcoin dominance relative to other cryptocurrencies. In January of 2016, the overall market capitalization was $615 million. By the end of December 2017, it was $373.6 billion. Much of these gains were accrued first to bitcoin and then by altcoins as seen in the chart below:

Bitcoin went from dominance levels of over 60 percent before losing market capitalization to ethereum, XRP, and litecoin. This is also observable when cryptocurrencies respectively peaked during the 2017 bull market.

Is the pattern repeating?

Now, the pattern may be repeating as bitcoin once again gains dominance. Relative to the total market capitalization of all cryptos, bitcoin has steadily risen to 59 percent market dominance, a 365-day high.

As seen in the past, altcoins were losing value as bitcoin marched upwards in dominance. However, now these gains are starting to flow into altcoins as bitcoin accelerates past $7,000.

Nevertheless, the crypto markets are still highly unpredictable. Even if historical data suggests these kinds of cycles exist, it would not be surprising for them to be broken.

That said, there are a few likely scenarios. If bitcoin continues to post astronomical gains with limited capital inflow into the overall market, then altcoins may continue to perform poorly. If capital starts pouring into the market, then rising bitcoin prices will likely raise the value of all coins. If bitcoin surges and then consolidates, it’s possible altcoins will see delayed gains as Felman has suggested.

Bitcoin recently hit new highs of $7,000 and altcoins are beginning to follow after several days of depreciation.

When bitcoin broke above $4,200 it marked a pivot point in the crypto markets.

Futures contracts of the second largest cryptocurrency, Ethereum, could soon be approved by the CFTC, a senior official at the regulatory body revealed.