The latest altcoin technical analysis suggested that a correction was on the horizon following a market-wide surge. 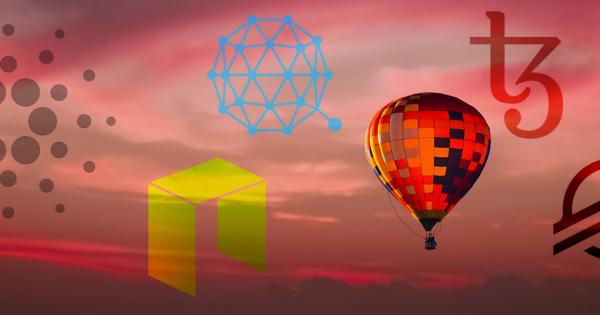 The latest altcoin technical analysis suggested that a correction was on the horizon following a market-wide surge. Now, it looks like the market is, in fact, retracing before there is a continuation of the bullish trend.

In a matter of six days, Stellar moved up 58 percent to shape the right shoulder of the head-and-shoulders pattern that has been forming in the 3-day chart since December of last year. Now that XLM has broken above the neckline of the pattern, at $0.135, a 45 percent move to the upside could be expected to happen in the near future. This target was calculated by measuring the height from the neckline to the head of the formation.

The head-and-shoulders pattern will be invalidated if XLM trades below the right shoulder at $0.089. 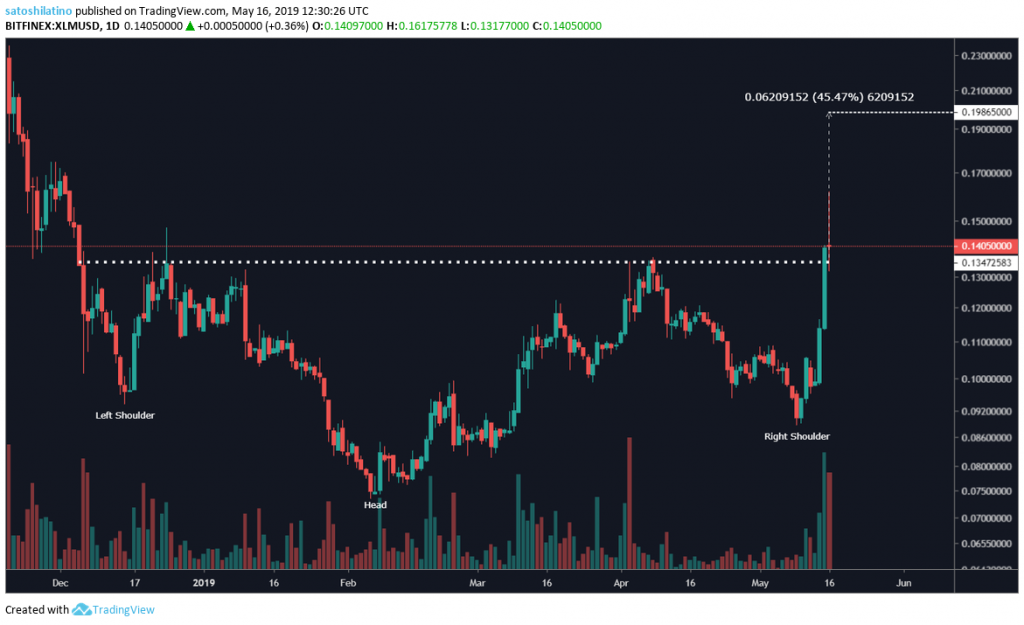 On XLM’s 12-hour chart, a long-legged doji formed at the top of the bullish trend. This type of doji indicates that Stellar’s open price was virtually equal to the close price and it could be signaling a pullback.

If the support level at $0.135 is broken to the downside, then XLM could retrace to the next level of support at $0.12. 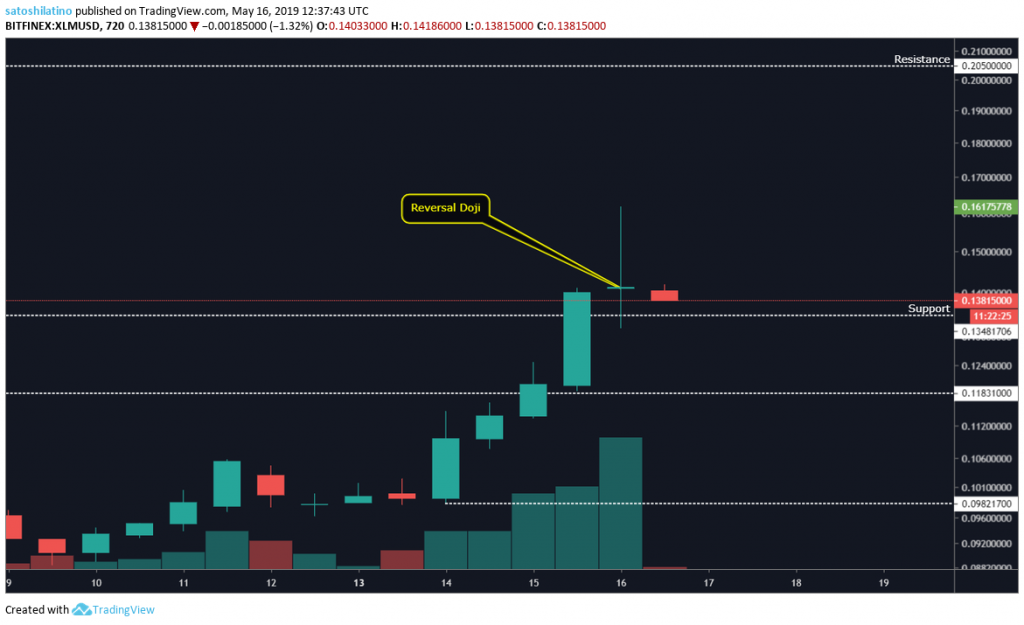 On the 4-hour chart, it seems like XLM could be trading inside a descending parallel channel. If it is able to trade below the middle line of the channel and the 7 moving average it could fall down to test the 30 moving average that is currently sitting at $0.115.

Conversely, a break above the parallel channel could push Stellar’s market valuation higher. 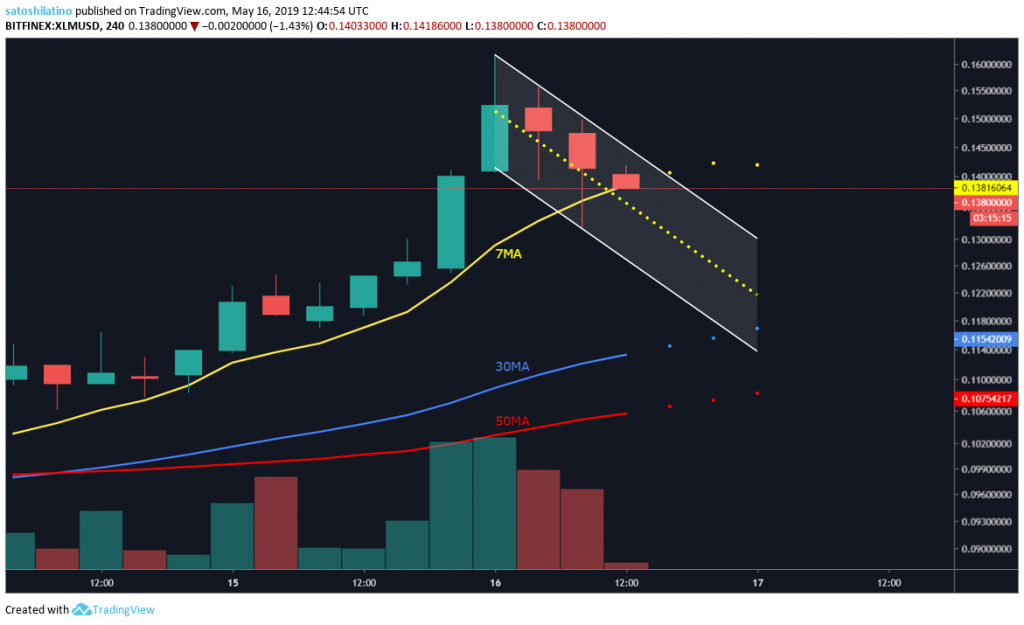 Since early April, NEO was trading inside a descending parallel channel that took it as low as $8.41 on May 10. Three days later, it broke above the channel and it went up more than 40 percent. After hitting resistance at $13.7 it corrected by 17 percent.

One of the most bullish technical patterns has been formed in NEO’s 1-day chart. A golden cross between the 100-day MA and 200-day MA took place around May 13. If NEO continues to trade above $8.5, the pattern will be validated and this cryptocurrency could be ready for a major bull run. 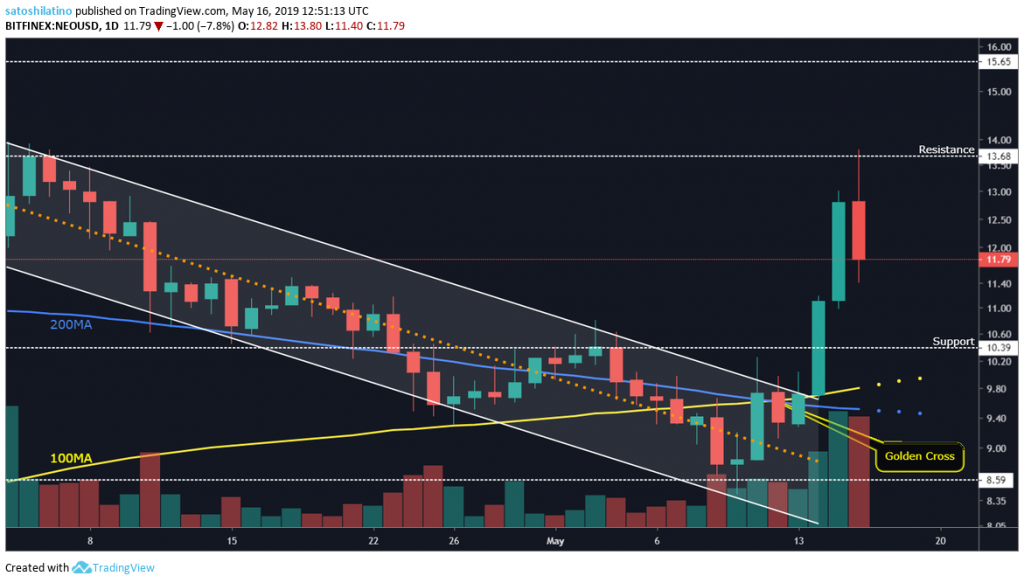 A bearish engulfing candlestick pattern has developed on NEO’s 12-hour chart, signaling lower prices to come. A break below $11.6 could take this crypto to the 100 MA that currently sits at $10.7, and if broken it could try to test the support level given by the 200 MA at $9.8.

If instead of breaking down NEO is able to trade above $12.7, the bearish engulfing candlestick pattern will be invalidated. It could then try to test the $13.7 resistance level once again. 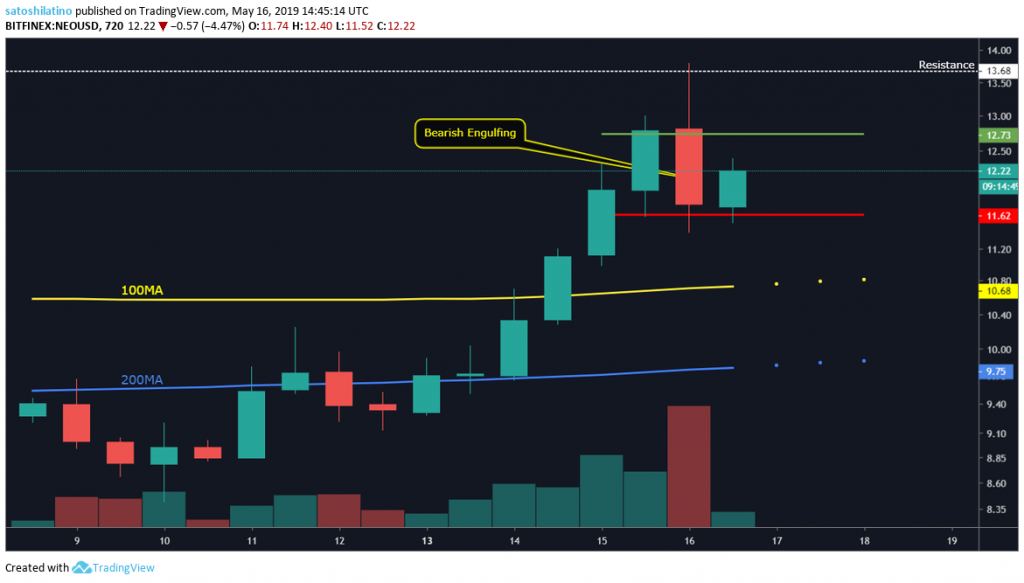 On the 4-hour chart, the TD Sequential Indicator gave a sell signal with a green 9 candlestick trading right at the $13.7 resistance level. The signal was validated once NEO broke below the 7 moving average. If the bearish movement continues, this crypto could try to go down to the 30 or 50 MA, sitting at $10.8 and $10.1 respectively.

To the upside, breaking above the 7 MA could give NEO a boost to try to break above the $13.7 resistance level. 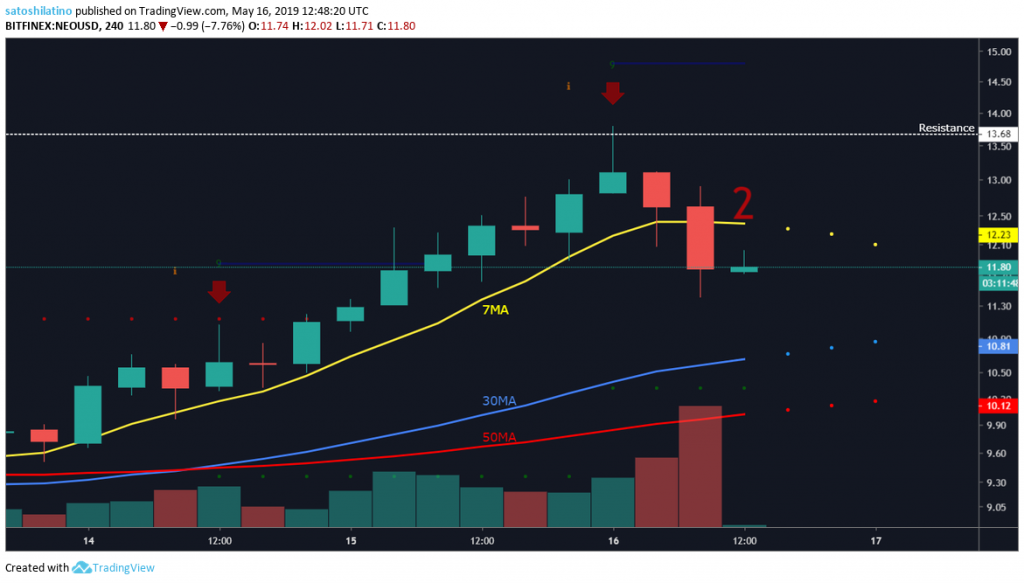 A double bottom pattern developed on Qtum’s 1-day chart. This is a technical formation that describes a trend reversal from bearish to bullish. QTUM has already reached the target given by the pattern as it approached the $3.6 resistance level. Now, this crypto is pulling back after the 48 percent jump it just experienced. 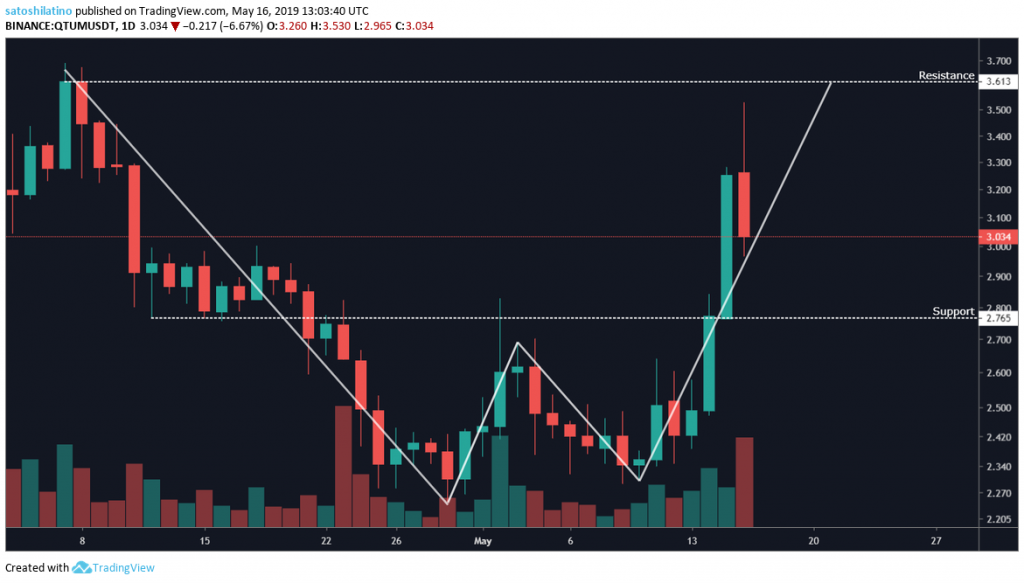 The TD Sequential Indicator was able to call the top on the 4-hour chart, giving a sell signal with the green 9 candlestick. Now that Qtum has almost reached the $2.9 support level, it could be preparing to continue the bullish trend. 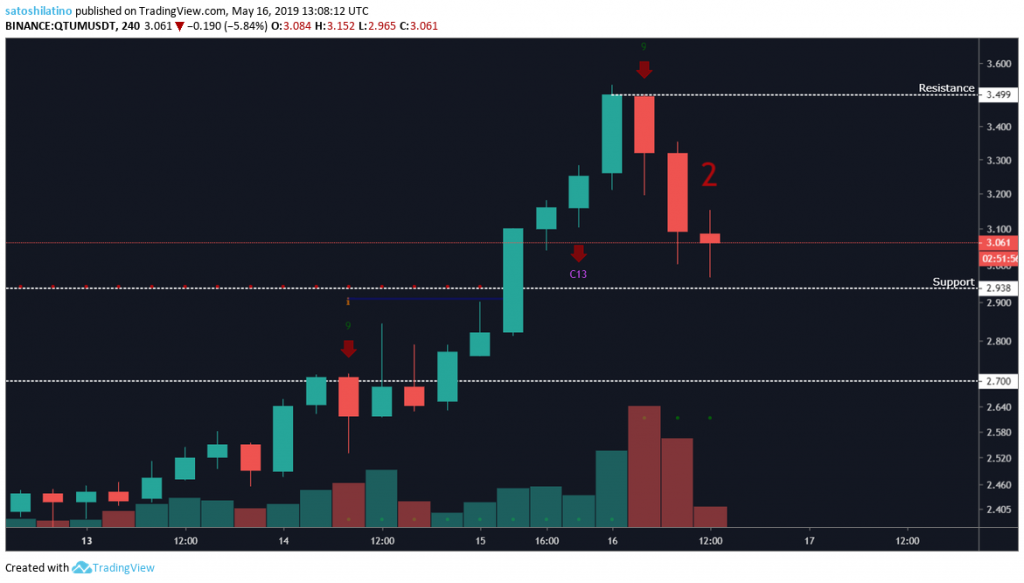 Cardano seems to be breaking out of a massive bull flag on the 3-day chart. This technical formation predicts a move up to $0.13, which is given by the height of the flagpole added to the breakout point. 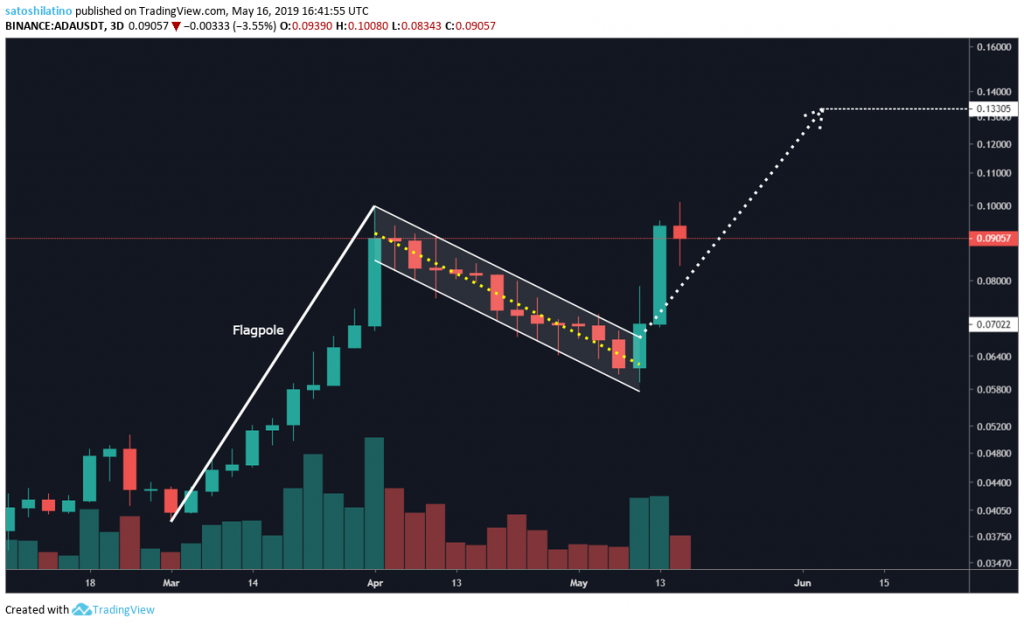 A bearish spinning top candlestick could be developing on Cardano’s 1-day chart. The pattern will be validated if the next daily candlestick closes below $0.083, which could take it to the $0.074 support level. However, a move above $0.1 could invalidate the bearish formation and ADA could rise to the $0.11 resistance level. 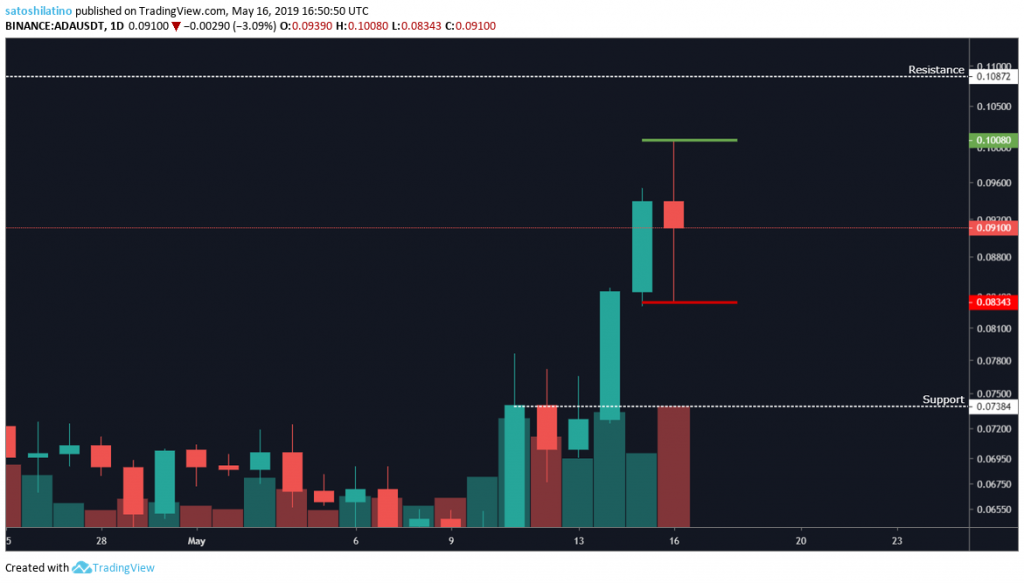 On the 4-hour chart, the TD Sequential Indicator gave a sell signal. Although the price retraced around 11 percent, it quickly came back up. If ADA trades below the 7 MA, there could be a further drop that could find support around the 30 or 50 MA.

If Cardano continues to trade above the 7 moving average, it could continue the bullish trend to try to test the resistance level at $0.11. 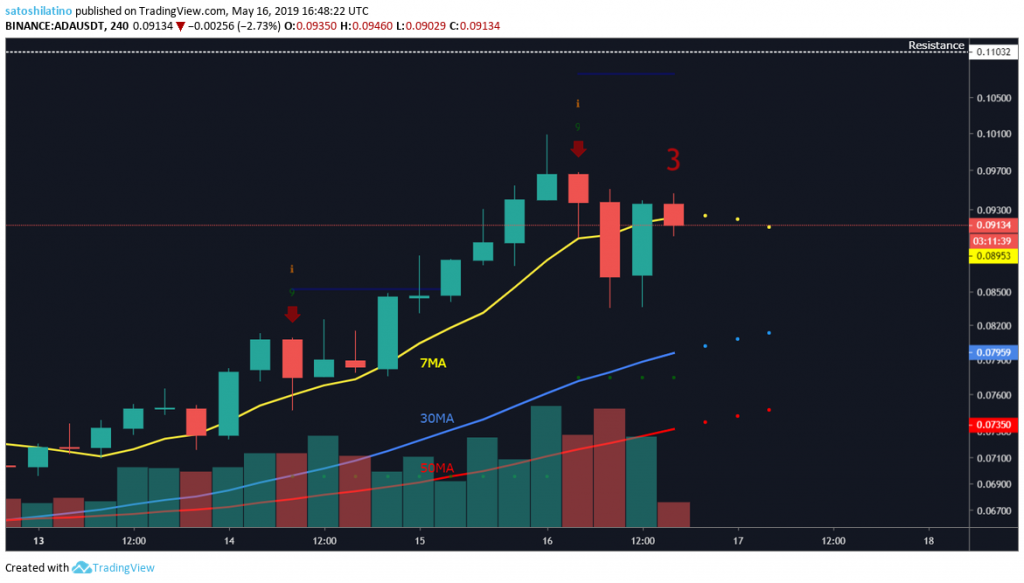 Tezos has been experiencing a steady increase in its market valuation after it reached a low of $0.31 on Dec. 7, 2018. Since then, it has moved up around 500 percent.

Now XTZ is trying to break above the $1.85 resistance level. If successful, it could try to test the next resistance level at $2.5. Conversely, if it breaks below the support level of $1.43, it could experience a further drop to $1.11. 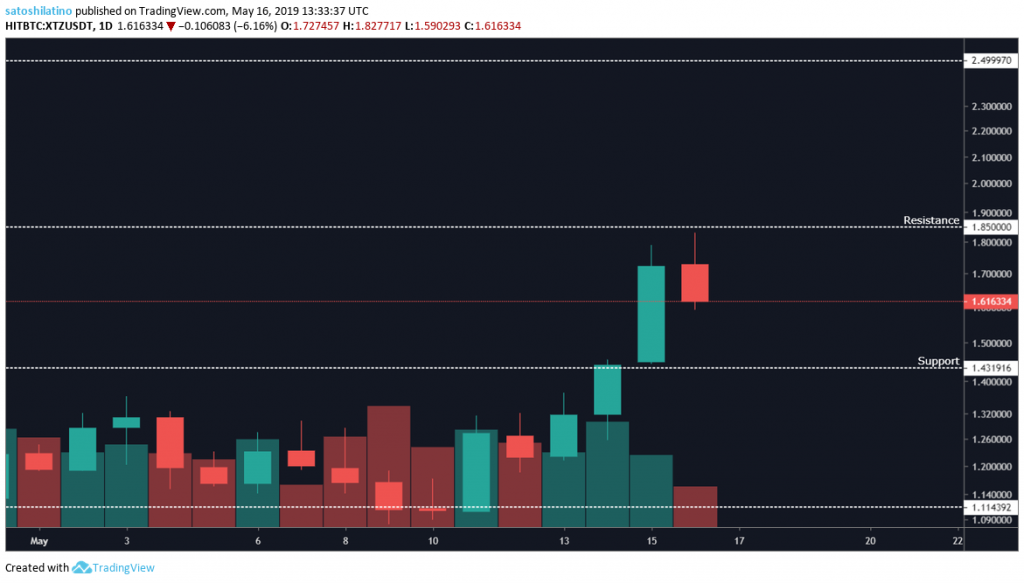 On the 4-hour chart, XTZ is trading below the 7 moving average, which is a bearish sign. A further drop could be expected, which could find support around the 30 or 50 MA. If any of these moving averages hold the drop, Tezos could rebound from any of these points of support. 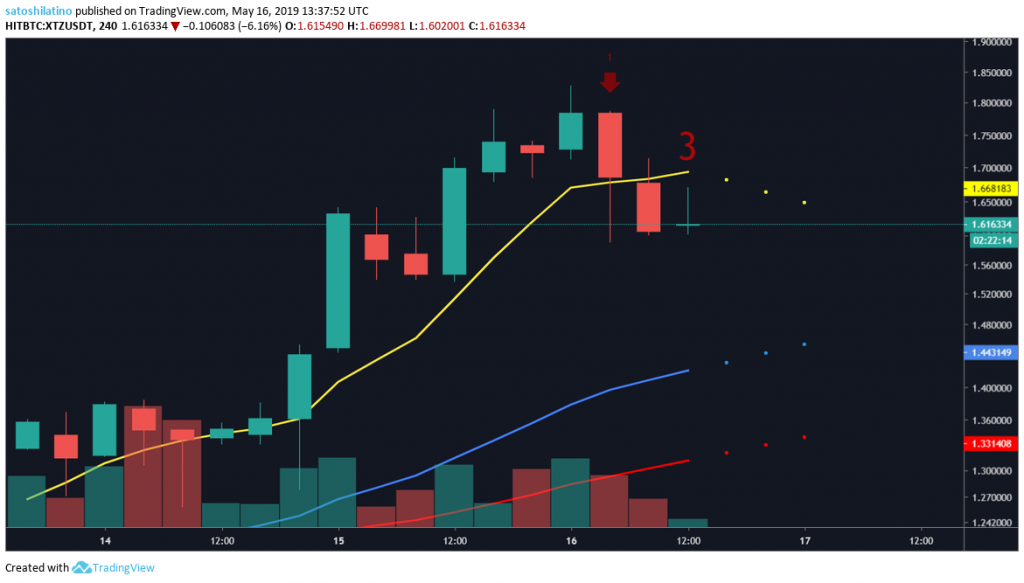 Following the bullish momentum that most cryptocurrencies experienced, a pullback is needed as part of a healthy rising trend. As seen in the technical analysis above, from Stellar to Tezos, all the altcoins seem to be going through a corrective period before the continuation of the trend. Hopefully, the support levels will hold the market valuation of these cryptos followed by a bounce off to new local highs.