Over the last three weeks, Bitcoin decoupled from the overall crypto market, with the coin’s market cap over 60 percent. 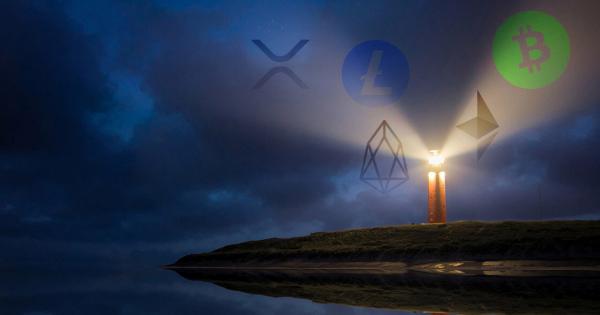 Over the last three weeks, Bitcoin decoupled from the overall crypto market, with the coin’s market cap over 60 percent. In fact, at the time of press, Bitcoin’s dominance is 60.15 percent. Yet, some traders expect major altcoins to begin breaking out to counteract the rise in BTC’s dominance. Technical analysis of the top five altcoins could give a glimpse of when the trend will shift.

Now, there are two different patterns with contrasting outcomes forming on ethereum’s weekly chart. One outcome could indicate a continuation of the recent bullish trend while the other suggests a further drop in market valuation:

Since the beginning of the year, XRP has staggered within a trading range without any major price movement. It seems like investors have lost interest in this cryptocurrency, even though it rose more than 64,000 percent in the bull market of 2017, from approximately $0.005 to $3.45.

A massive head-and-shoulder (H&S) pattern has been forming on XRP’s weekly chart, which predicts a bullish-to-bearish trend reversal. According to Investopedia, this pattern is considered one of the most reliable trend reversal patterns.

The H&S will be validated if XRP breaks below the “neckline” or support line at $0.28 with significant volume, but it will be invalidated if the price moves above the height of the right shoulder at around $0.78. The target can be calculated by measuring the height between the “head” and the “neckline” and subtracting it from the “neckline.”

On the three-day chart, XRP can be seen trading inside a parallel channel since Dec. 15, 2018. Every time it reaches the top of the channel it reverses to test the bottom of the channel and vice versa.

Now that XRP is trading on the lower side of the parallel channel, it could be expected to move up to the middle or upper side of the channel based on its recent price action. A break above the top of the resistance line could take XRP to new yearly highs while a break below the support line could take it to lower lows.

Since the first week of April, bitcoin cash has moved up around 130 percent. Even after seeing an exponential increase in its market valuation, it seems like there is more room for BCH to go up.

On the weekly chart, a bull flag formed and now it seems to be at its breakout stage. A target is given by adding the height of the flagpole, which is around 52 percent, to the top of the flag sitting around $290. At the time of writing, bitcoin cash is trading at $352, which is very close to the ultimate target given by this pattern.

Litecoin has experienced a steady increase in its market valuation since it reached a low of $22 on Dec. 14, 2018. Since then, it has appreciated more than 350 percent. After reaching a high of $100, it failed to break major resistance at $97, after which it pulled back to support at $67.5. LTC has now started inching up again in tandem with BTC.

On the three-day chart, litecoin can be seen trading inside an ascending parallel channel since Dec. 14, 2018. A fake breakout of the channel was triggered on Apr. 3, 2019, but it quickly returned to a trading range within the bottom of the parallel channel.

After bouncing off the lower line of the channel, LTC seems to be fighting the resistance given by the middle line. If it is able to break above the line, then it could go as high as the upper line of the parallel channel. A breakout of this pattern could trigger higher highs, while a break below the channel could take it back to the support levels previously described.

EOS seems to have formed an Adam and Eve bottom from Dec. 2018 to Feb 2019. Following the break of the $2.90 resistance level, EOS has reached the $6 target given by the pattern.

While bitcoin has risen over 130 percent since its December low, most altcoins have risen equally, or higher, during the same time span. A different number of indicators are predicting that the top altcoins could soon experience bullish momentum. XRP, however, could have a bearish future based on this technical analysis.

Up until now, nearly all altcoins have lost value relative to bitcoin over the last month. If these cryptocurrencies are able to break the different resistance levels described above, it could trigger a rally that allows them to trade at more favorable rates against BTC.

The overall sentiment of the market, as the charts indicate, is bullish. That said, given the rapid increase in prices, a correction in BTC prices could cause panic and erase newfound gains for the entire market over the short term.