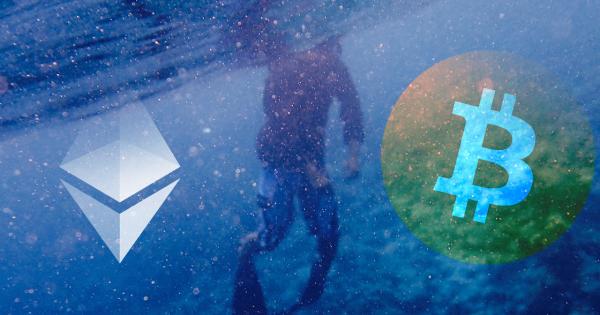 The abrupt decline in the price of Bitcoin was triggered by the placement of a large sell order on Bitstamp and other major crypto exchanges, which triggered contracts on margin trading platforms like BitMEX to become liquidated.

“For reference, someone put a 5,000 BTC sell on Bitstamp, which BitMEX uses for 50% of its feed and it appears to have tripped some algorithms which made a cascade on BitMEX.”

A whale crashes the entire crypto market 20% in 5 minutes with a single sell order on the books and people actually think an ETF is coming? 🤣

Conner suggested that the manipulation of the crypto market, possibly by a single whale, may hurt the chances of an exchange-traded fund (ETF) approval in the near-term.

The 5,000 BTC sell wall on Bitstamp that led to the sell-off of both bitcoin and Ethereum on BitMEX, led to a $30 billion drop in the valuation of the crypto market overnight.

Some analysts, including global markets analyst Alex Krüger, have said that the overnight 10 percent drop of most crypto assets could serve as evidence that the narrative of the viability of crypto assets as a safe haven against global financial instability is flawed.

“We can now put aside that nonsensical narrative of bitcoin as a hedge for US-China trade wars. The move up was engineered by a handful of parties, and so was this crash. Not as sexy, I know.”

As the short-term price action of Bitcoin and other major crypto assets gets absorbed by the market, investors still expect the market to sustain its positive sentiment and trend over the coming months.

While a minor pullback in the crypto market was expected by many investors, the magnitude in which assets fell came as a surprise to traders.

More Reason Why Bakkt is Compelling

In a sense, the short-term correction was triggered by a whale’s exploit of the current structure of the crypto market.

If the market had more trusted, regulated, and widely utilized platforms, it may have been more difficult to manipulate the market and the prices of major crypto assets.

Peter Brandt, a respected trader and technical analyst, said on May 13 that the launch of Bakkt, which is scheduled to occur in July with the approval of the Commodities and Futures Trading Commission (CFTC) could have a long-lasting impact on the state of the crypto market. Brandt said:

“This contract will be the death-nail in dozens and dozens of dishonest and il-liquid exchanges across the world as the industry drives toward standardized price discovery with custodian protection and a trade settlement process.”

Bitcoin and the rest of the crypto market recovered relatively quickly following a 10 percent drop, leaving a sign of relief after a rapid downside price movement.

Bakkt, an institutional cryptocurrency trading platform led by the Intercontinental Exchange (ICE), expects their bitcoin futures to be listed on federally regulated futures exchanges in July.