The market is catching up with bitcoin. 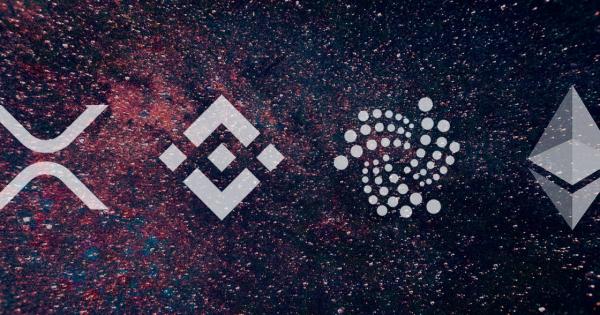 The market is catching up with bitcoin. After breaking—and monetarily holding—$8,000, other altcoins are getting some action. XRP recently saw a 40 percent increase, Ethereum is surging, and Binance coin is approaching all-time highs.

Technical analysis suggests a major correction could happen at any moment. Nevertheless, there are indicators that the top three cryptos by market cap, in addition to Binance coin and IOTA, show promise.

The TD Sequential Indicator, created by Tom Demark, sets various numbers above and below the candlesticks on a chart that can be interpreted as bullish or bearish signals.

On the 1-day chart, bitcoin is currently on a green eight candlestick. A sell signal could be given on May 16 if, by that time, BTC is still trading above $6,980 as per the sequential indicator.

On the 12-hour chart two different patterns are visible:

On the 4-hour chart, bitcoin seems to be trading inside an ascending parallel channel as the price has been showing areas of support and resistance that can be used to set stop-loss orders and profit targets.

At the bottom of the channel, a bullish engulfing candlestick pattern formed, signaling that BTC could go back to the top of the channel. A breakout above the ascending channel will signal a continuation of the move higher, while a breakout below will indicate a possible trend change from bullish to bearish.

An ascending triangle has formed on the Ethereum 1-day chart as it breaks out. The target of this pattern can be calculated by taking the height of the triangle and adding it to the $160 breakout point.

Based on the TD Sequential Indicator, a buy signal was given once a green two started trading above a green one candlestick on the 12-hour chart. The current candle is a green three validating the bullish perspective.

On the 4-hour chart, ether has been rising, forming a channel, inside three ascending parallel lines. A break out of the parallel channel could take ETH to reach new highs, while a break below could set it back to the previous support level.

On the 12-hour chart, a sell signal has been given by the TD Sequential Indicator, warning of a potential pullback to $0.38. A move above $0.44 could eventually invalidate the sell signal.

A bull flag formed on the 4-hour chart and now it seems to be at its breakout stage. A target is given by adding the height of the flagpole to the top of the flag sitting around $0.40. At the time of writing, XRP traded above $0.45, which is very close to the ultimate target given by this pattern.

Recently, IOTA went through a 30 percent push up, which seems like it could have been predicted with the red nine, which is a buy signal given by TD Sequential Indicator. The trading technique was accurate the last two time it signaled a buy for the coin.

On the 12-hour chart, the TD Sequential Indicator has given a sell signal, which will be confirmed once there is a red two trading below a red one candlestick. If it was to fall, the closest support level sits at $0.32

BNB could be about to reach higher highs if it is able to trade above $25.5, which could set the stage for a major bull run of this cryptocurrency.

The TD Sequential Indicator has given an unperfected green nine candlestick on the 12-hour chart. This means that although it is a sell signal, it is not a strong one, and the potential for a pullback diminishes. If the price actually corrects, it could try to test the previous support level at $21.55. If BNB continues rising it could get to a new all-time high

Are altcoins catching up to bitcoin?

Most of the coins analyzed in this article have recently made a significant move up in their market valuation. At this point, it seems like they could reach higher highs, especially Binance coin. Even XRP, the most bearish looking altcoin, has increased more than 40 percent and Ethereum may be about to make a move as well. These all support the case that altcoins are starting to follow Bitcoin’s lead.

Market Analysis: How Altcoins are Impacted by Bitcoin’s Price Drop